Not Your Typical Horse Sport 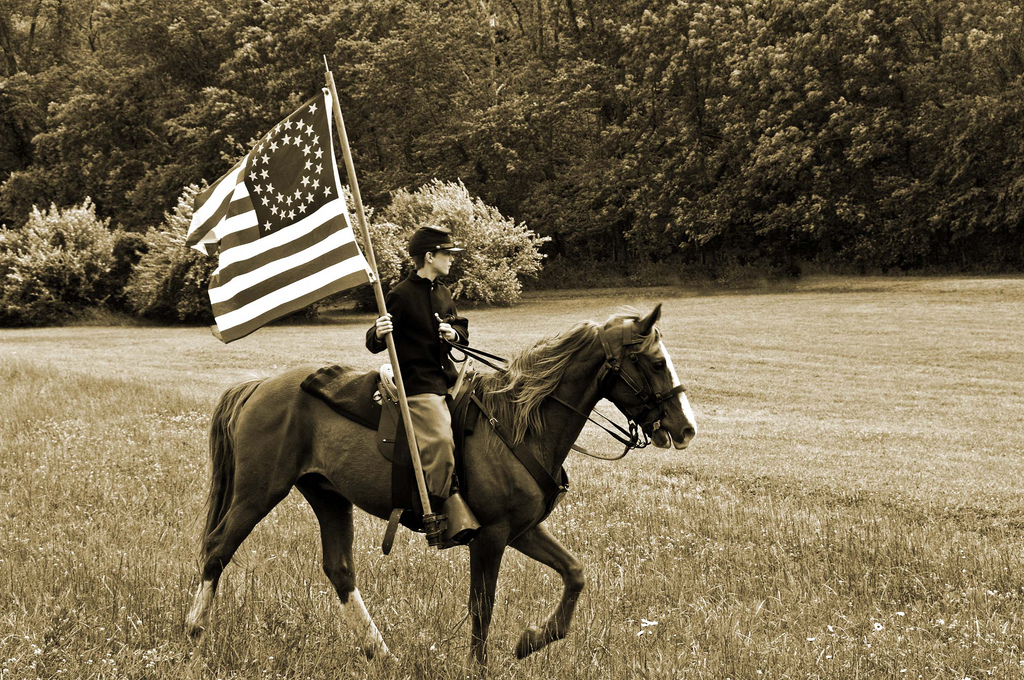 Cedar Creek, VA. The year, 2004. My mother and I packed our bags and prepared for battle. We joined up with a few friends and embarked on the long drive from New Hampshire to Virginia—enemy territory. We arrived safely. On the battlefield I wore hand-me-downs and borrowed pieces of uniform and joined our friendly forces for one of the most thrilling moments of my life. It was only a taste of the life I was about to join.

I was 13 years old when I first started Civil War reenacting. You can probably guess how it started—yep, horses. I also had a few fortunate connections, like my mother’s long time friend and co-worker who just so happened to be the captain of his own Civil War Reenacting group.

My first event was such a thrill I was able to talk my entire family into joining. We quickly collected the appropriate gear we would need and I was soon introduced to the horses in the group. Fortunately, I was also introduced to the woman who would become my trainer for the next 10 years, and of course the horse that would teach me more than I could ever hope to learn.

Over the next few years we attended events regularly with horses in tow. Some were local while others required extensive travel. But every time I woke up to the sound of first call, dressed in my wool, and mounted up for the day. I’ve galloped out into the battlefield with cannons booming behind me. I’ve stampeded into battle with my sword ready (and even high-tailed it out of there when my horse got a little spooked!) I’ve delivered messages between units, followed my captain with the flag proudly in hand, and even had a relaxing ride in my favorite flowing dress (Yes, I frequently play both gender roles). 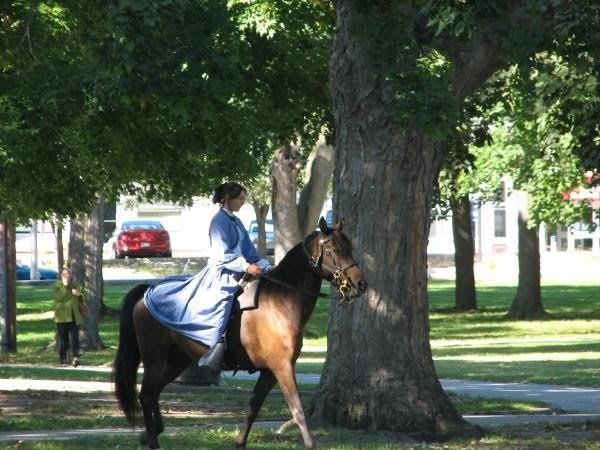 Horse is a Morgan called Luke who belonged to another group who would often let me ride. I think everyone knew I was that horse crazy girl!. And yes, I “cross-dress” often.

I continue to partake in reenactments, averaging one weekend event a month. I did it through high school, college, and still to this day as I juggle a full time teaching job and my very own 1500 pound furbaby. I brought Moose home three years ago and have been preparing him for a life as a war horse since then. Now, with my own truck and trailer ready to go, it’s only a matter of waiting until next season before we will be on the field together.

Most of our reenactments take place over the course of 3-4 days (depending on how much time we can take off work.) For the most part we pack all of our gear on Thursday nights and depending on the travel time, typically leave early in Friday afternoon so we can pull in and set up before nightfall. 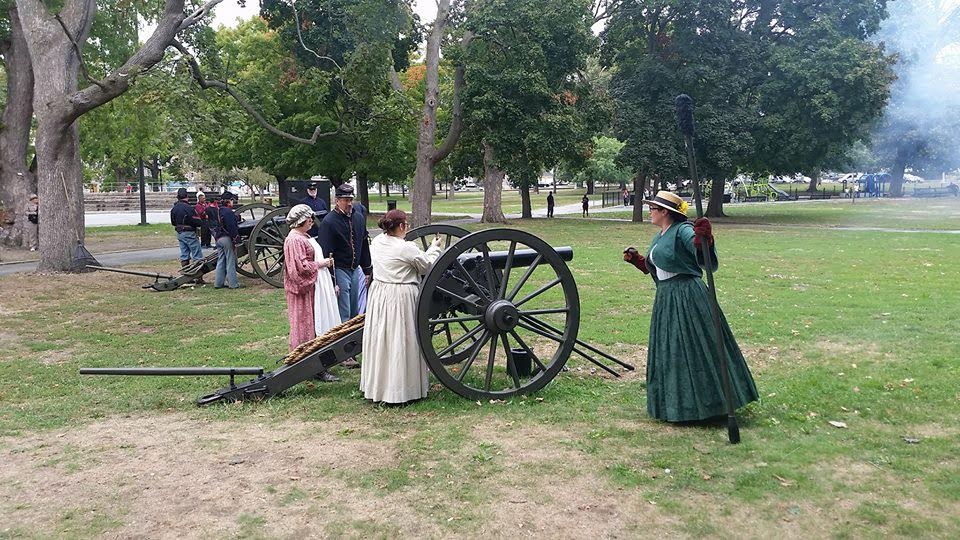 The ladies know their stuff, too. We’re all well trained on every position on the gun. I’m in the green dress.

Set up can take a couple hours with just a few people pitching in. Depending on who is able to come that weekend, we could have anywhere between 3-7 tents set up. Our tents are not 150 years old but they are made to resemble the A-frame and dog tents the soldiers used back then. And yes, we sleep in them all weekend. We have been through snow, hail, high winds and hurricanes in those tents, and I can promise you they’re probably better made than any modern tent you’d take camping (Of course, they’re not as convenient to set up and carry around. A standard canvas A-frame tent in its bag with ropes and stakes can weigh well over 50 pounds). 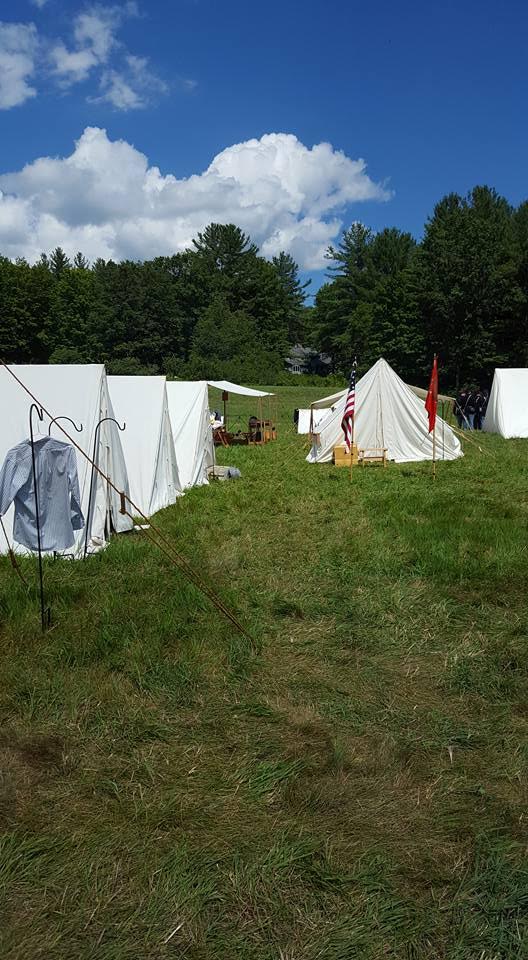 A typical view of our camp. This is known as the ‘camp street’. Captain’s tent is the A-frame at the end. The tents on the left would typically hold 6 grown men in the time of the Civil War. For an idea of space, we can barely fit two people with cots and clothing. But they are tall enough to stand in.

Not only do we set up our weekend living quarters, but we also set up our fly tent, which tends to be our common area for the weekend where we cook and eat. This is usually a much simpler process involving a simple, canvas tarp that is left open. It provides shade and shelter and a place for us to gather when the day is done.

As a light artillery group we tend to have less equipment than other units because our equipment is just our firearms. As long we have fire power there and at least four soldiers, we can put on a decent show. We have used two different kinds of guns in the past—a 10 lb. parrot rifle and a 3″ ordinance rifle. 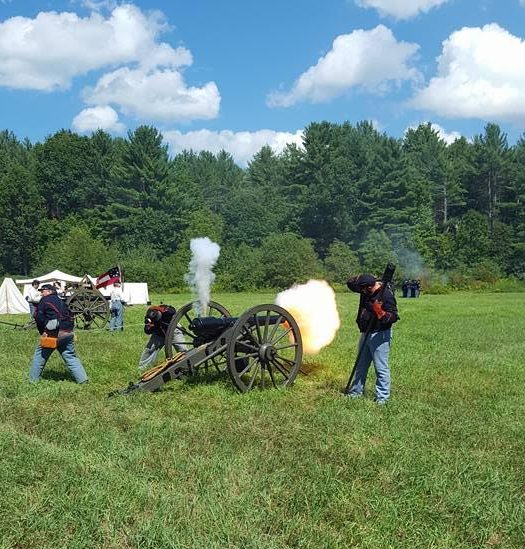 In the early spring, before our first events, we get a large shipment of black powder and spend the day making over 100 rounds. We fire half pound rounds, but when we’re feeling good, we throw a couple one pounders in there for a much bigger boom (our guns are replicas and they can shoot live rounds as well).

Of course, we can’t forget the horses. Depending on the travel time, the horses will come down with us on Fridays. We pack the things you would take to any horse show—hay, grain, muck buckets, brushes, tack, etc. A couple extra items we take include a picket line and lots of rope to mark a boundary for spectators. It is important to give our beloved companions the space they need but our horses are pretty well adjusted to the reenactment lifestyle and know and enjoy their job. Our tack is as period correct as possible. We use McClellan and Grimsley saddles, as they did during the Civil War. 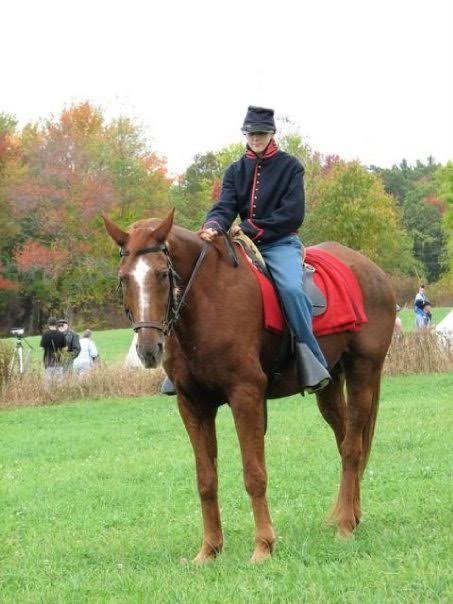 Alante and I at one of our first events together. This was usually the horse I used. He belonged to my trainer at the time. I was probably around 16 years old here. Alante is sporting his period correct tack, including a McClellan saddle.

Our events usually start Saturday mornings when camp officially opens to the public. Most events get a lot of local publicity so we tend to see a lot of spectators, especially at the bigger battles. Of course, they’re all interested in the horses and the guns, and our mock battles are always a hit. 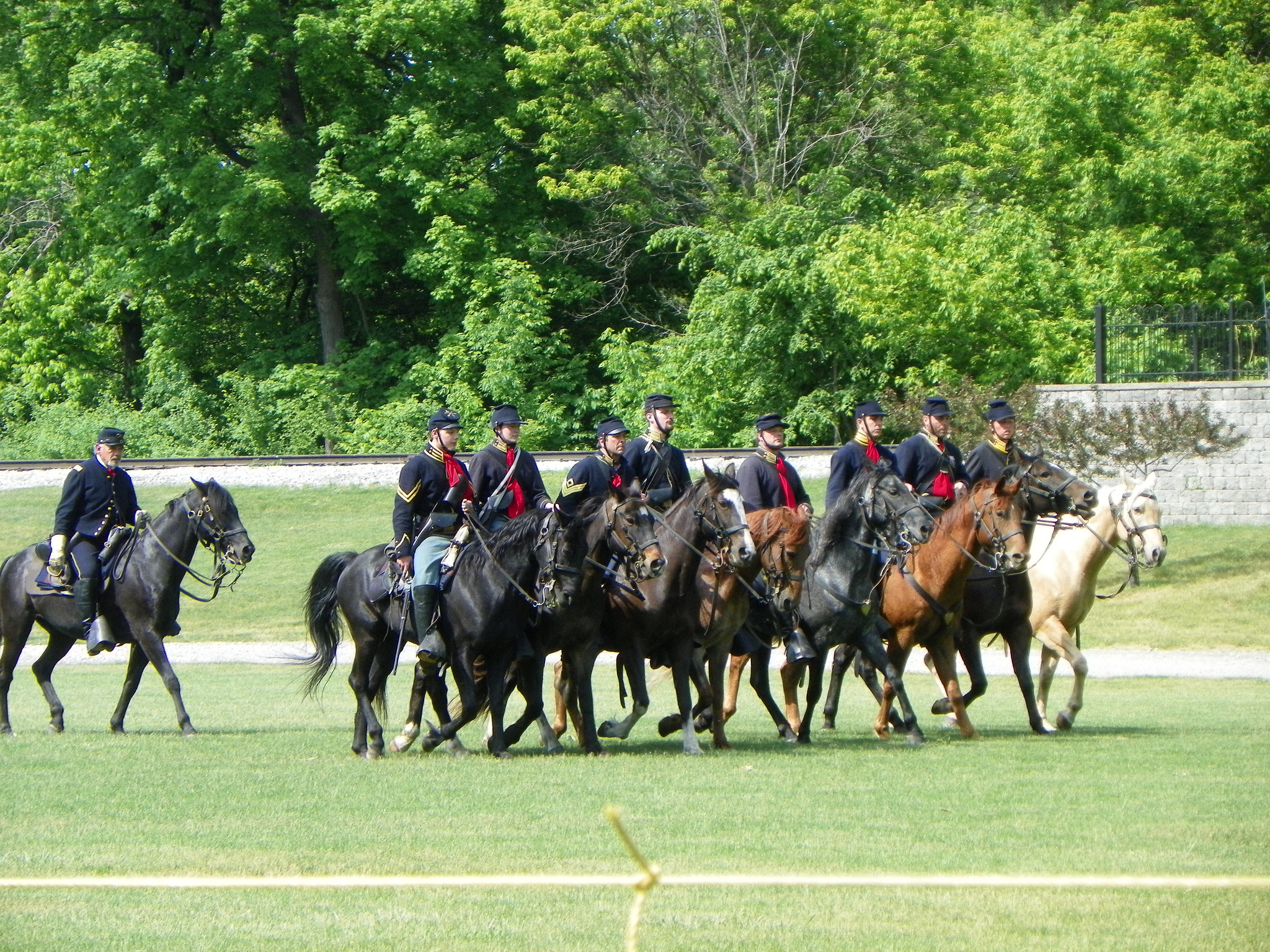 Smaller events allow us to be more relaxed. Other events involve mock battles between many other groups, including the cavalry. Nothing beats the incredible sight of soldiers and their steeds galloping head on into battle, swords and guns raised. The horses are truly fearless and game to play along. Some soldiers willingly throw themselves off of their mounts in simulated, theatrical death, and their horses immediately stop to munch on some grass while waiting until another rider comes to collect them.

At the end of the day camp closes to the public and the horses get their much deserved dinners. We feed our own hungry bellies with a meal cooked over the fire (fortunately for us, we have a great cook in our group. Huzzah, Jim!). The horses spend the night camping out with us, relaxed on their lines until Sunday morning where we do it all again.

The lifestyle of the reenactor is not a glamorous one. We don’t shower for days at a time, and it is often like having a second full-time job. It takes up a lot of our time and resources, but I have found my second family and made lifelong relationships. I am fortunate that I was able to start doing this many years ago and have since dragged my whole family into it with me. I look forward to every event, especially our nights by the fire enjoying the company of our friends.

The equestrian world has come full circle over the last few years. No longer is it a world of racing, polo, jumpers and work horses. We are now archers, shooters, jousters, tricksters, skijorers and yes, reenactors. We’ll do almost anything if horses are involved, and if not we ask, why not? 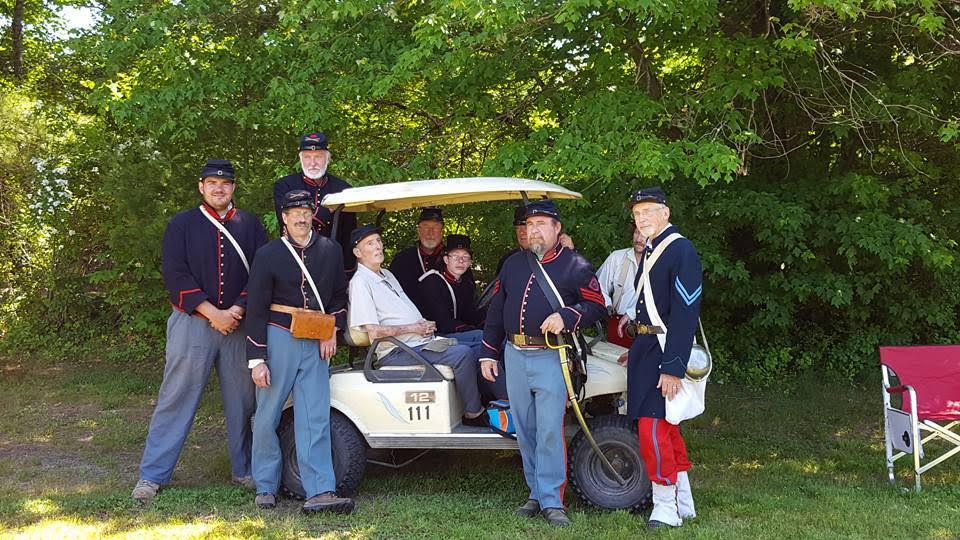 This article is dedicated to Tom Webb, the man in the golf cart, who passed away this past summer. He was a vet, a beloved member of our group, and a true friend who will be missed. Huzzah, Tom!

Katie Fiorella has been riding since she was 10, a Civil War Reenactor since she 13, and she was rescued by her beloved Percheron cross, Moose, when she was 21. 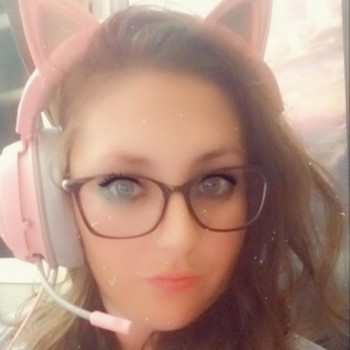