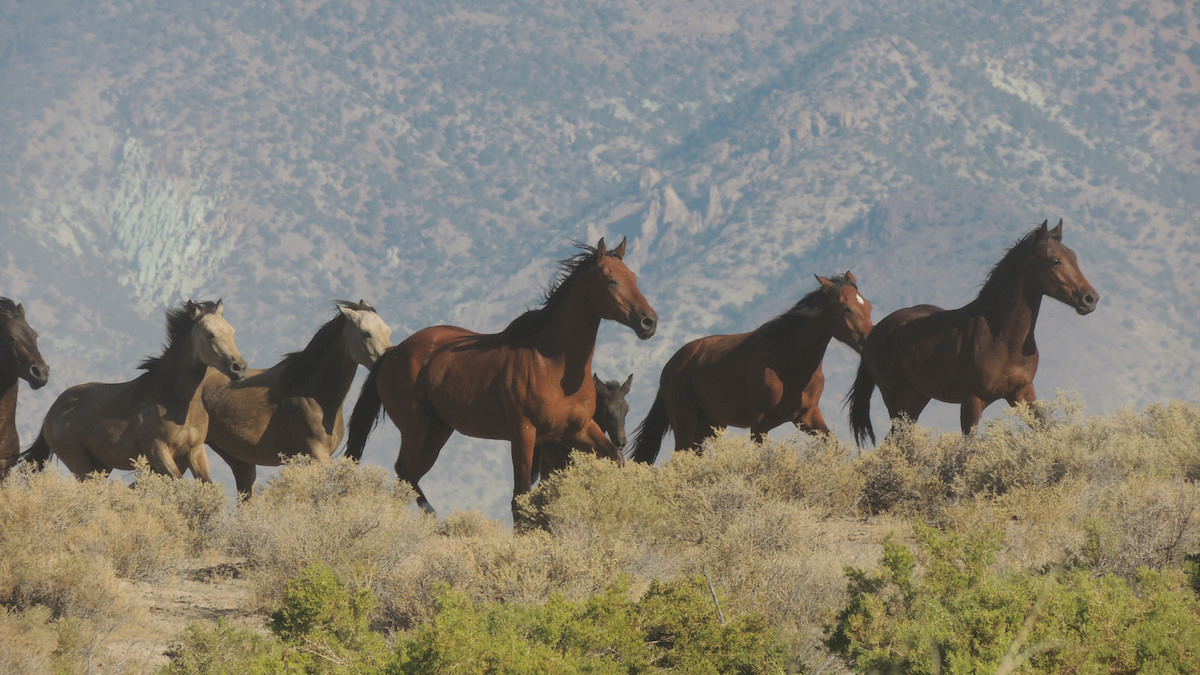 This week, the U.S. Bureau of Land Management’s (BLM) Deputy Director, Steve Ellis, delivered an address to Congress on the federal agency’s most daunting and polarizing responsibility: managing the wild horse herds of the American West.

According to The Associated Press, the cast of characters in attendance put on a passionate and contentious public display that proved, if nothing else, that the many issues that have plagued the BLM’s “$1 billion problem” for decades are still very much alive.

Here’s a quick recap of what was discussed and how it fits into the bigger picture (you can read the hearing memo for yourself, here).

The usual: too many horses, too little space. There are about 67,000 wild horses and burros currently inhabiting western federal rangelands, a 15% increase over 2015 population figures. The BLM estimates that, like the Duggars, herd sizes double every four years.

What’s more, that’s not even counting the wild horses in “captivity.” The BLM currently holds 45,458 wild horses and burros in off-range holding facilities, either in eco-sanctuaries, short-term corrals, or long-term pastures. In 2015, these facilities cost the BLM $49 million to maintain, or roughly 66% of their total budget.

And it gets worse. According to the Department of the Interior (which oversees the BLM), the 2017 budget requests less, not more, funding to carry out the BLM’s programs than in 2016, despite the fact that the BLM says it needs more to function. #hotmess. 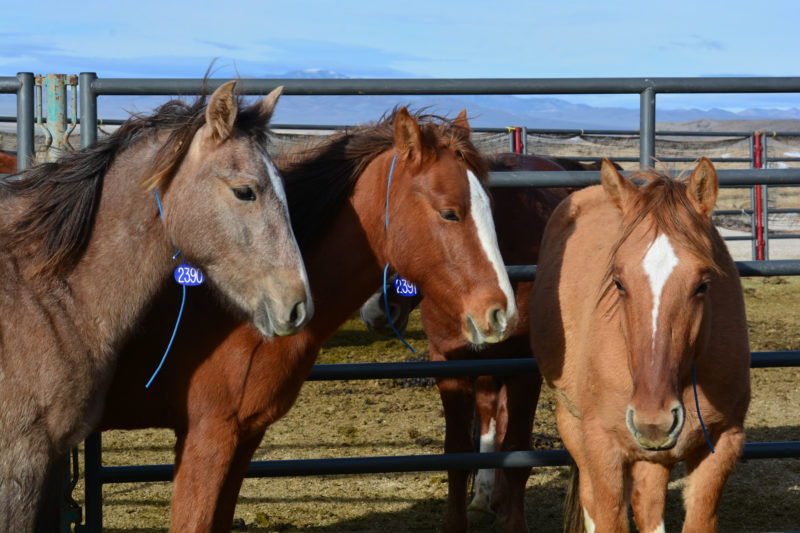 In one corner, the lone pro-horse advocate, Ginger Kathrens, founder of The Cloud Foundation, who was asked to present a five-minute case for wild horses and burros. Kathrens called methods that include castration, sterilization and long-term confinement of horses in holding facilities, “…cruel, unhealthy and fiscally irresponsible.”

And in the other, the Red Team: made up of Rep. Rod Bishop (R-Utah), who said it’s time to have a “tough conversation” about more permanent solutions for wild horses; Rep. Cynthia Lummis (R-Wyoming) and Rep. Tom McClintock, chairman of the House Natural Resources subcommittee on public lands, who spoke in favor of putting euthanization back on the table; and Rep. Bruce Westerman (R-Arkansas) who compared sterilization to the spay and neuter surgeries performed on dogs and cats every day. Westerman added that he himself has a new puppy and that, “his day is coming soon.”

And finally, the Nevada Department of Agriculture’s veterinarian (and longtime rancher), J.J. Goicoechea, who went all-in in favor of surgical sterilization, stating that 100 percent of horses in overpopulated herds should be sterilized before returning some of them to the wild. Well alright then.

Only if you still have a poster of David Cassidy on your wall. Since 1978, the BLM says it has supported contraceptive methods for wild horses, which in the past have included hormone implants, chemical vasectomies, and intrauterine devices. All of these, the BLM says, “…were tried and later abandoned as ineffective or impractical at that time.”

What about other options?

Today, the BLM says its most promising population growth suppression agent is a contraceptive vaccine known as porcine zona pellucida (but you can just call it PZP). Two formulations of PZP currently exist: a one-year liquid vaccine that can be administered as a ground dart (ZonaStat-H) but must be repeated annually, and a pelleted PZP agent (PZP-22) which lasts up to 22 months but must be administered by hand, meaning that mares must be rounded up and contained before they can be treated.

That all depends on who you ask. According to the Cloud Foundation’s pro-PZP Ginger Kathrens, the answer is yes. “There are reasonable, cost-effective and humane alternatives to current and/or proposed BLM wild horse and burro management policies/approaches—namely, those including proper PZP application,” she told Horsetalk.co.nz.

According to Kathrens, both the McCullough Peaks wild horse herd near Cody, Wyoming and the Pryor Mountains herd in Lovell, Wyoming are being successfully maintained through PZP remote darting methods at either high Appropriate Management Levels (AMLs) or equal natural mortality/reproduction levels.

As you might expect, the BLM sees things quite differently, and they aren’t exactly sailing away on the PZP love boat. Here’s their analysis:

“Since 2004, the BLM has administered PZP-22 to thousands of mares on the range, but significant reductions in the rate of population increase on a national level have not yet been apparent.”

According to a table on the BLM’s website, though, the agency has significantly scaled back its PZP and PZP-22 efforts in recent years, from more than 1,000 horses and burros treated with the vaccines in 2012 to less than 500 in 2015. The BLM notes that the dart-deployed PZP formulation is not a viable option for most wild horse herds because:

“(1) the animals’ propensity to avoid human contact and (2) the vast sizes of most herd ranges, which make it difficult to locate and track individual horses.”

Which sounds a lot like the BLM is adding PZPs to the cold case files for mustang contraception. 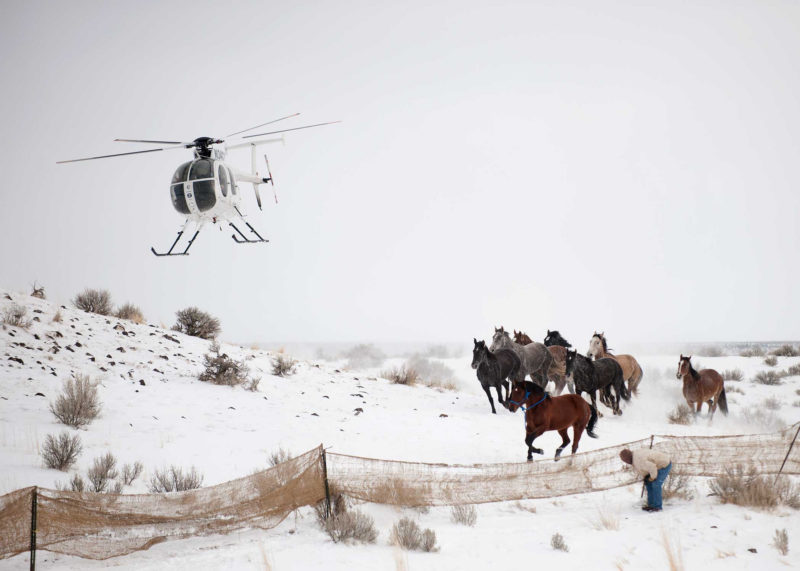 The helicopter gives the final push into the gather site as a wrangler awaits behind the jute. These wild horses were gathered Jan. 12 from the Star Ridge portion of the Owyhee HMA. Approximately 150 wild horses will be gathered from this area where mares will be treated with the PZP fertility control agent and released. Yearlings will be transported to Palomino Valley Adoption Center and will be prepared for adoption. (flickr.com/BLM Nevada)

So, does anyone speak for science here?

Well, actually, yes. On their website, the BLM justifies its lack of PZP enthusiasm based on a 2013 National Academy of Sciences (NAS) report, which they say, “…found that no highly effective, easily delivered, and affordable fertility-control methods were currently available to manage wild horse and burro population growth.”

We looked up that NAS report brief. Here’s what it says about PZPs and other fertility control methods:

The most promising fertility-control methods for free-ranging horses or burros are porcine zona pellucida (PZP) vaccines and GonaCon™ vaccine for females and chemical vasectomy for males. This conclusion is based on criteria such as delivery method, availability, efficacy, duration of effect, and potential for side effects. Although applying these methods usually requires gathering horses and burros, that process is no more disruptive than the current method of population control—gathering and removal—without the further disruption of removing animals. Considering all the current options, these three methods, either alone or in combination, offer the most acceptable alternative to removing animals for managing population numbers.

Hmm. What else does that report say?

In general, the NAS report seems to be less about the hopelessness of contraception methods and more about those big, fat check marks on the BLM’s report card under the “needs improvement” category. Thaaaat’d be the sections that evaluate the BLM’s ability to research, monitor, and manage wild horses effectively. So, like, how your plumber would score on unplugging your toilet, or making sure that there’s water coming out of your sink.

Here’s a wider view of the NAS’s findings from the Report in Brief:

“The Wild Horse and Burro Program has not used scientifically rigorous methods to estimate the population sizes of horses and burros, to model the effects of management actions on the animals, or to assess the availability and use of forage on rangelands. Evidence suggests that horse populations are growing by 15 to 20 percent each year, a level that is unsustainable for maintaining healthy horse populations as well as healthy ecosystems.”

“Promising fertility-control methods are available to help limit this population growth, however. In addition, science-based methods exist for improving population estimates, predicting the effects of management practices in order to maintain genetically diverse, healthy populations, and estimating the productivity of rangelands. Greater transparency in how sciencebased methods are used to inform management decisions may help increase public confidence in the Wild Horse and Burro Program.”

The NAS goes on to say that, “Continuing ‘business as usual’ will be expensive and unproductive for BLM and the public it serves.” Burn.

So besides kicking around the BLM, what else is being done?

According to the BLM’s website, eight different fertility control research projects that have been reviewed and recommended by a NAS panel of experts are currently in the works. The BLM is also getting some evening tutoring from the U.S. Geological Survey to help them up their science game when it comes to estimating wild horse and burro populations.

At the hearing, the BLM also noted that it is transitioning horses from off-range corrals to more cost-effective pastures, and working to increase adoption programs, despite the declining interest in wild horse adoptions in recent years. Regarding the other measures discussed, we’ll keep you updated as this issue develops. (Or doesn’t.)

Like what you’re reading? Check out: “The Story of Tom Davis, the BLM, and 1,700 American Wild Horses Who Disappeared.”