The German Team Is a Well Oiled Machine 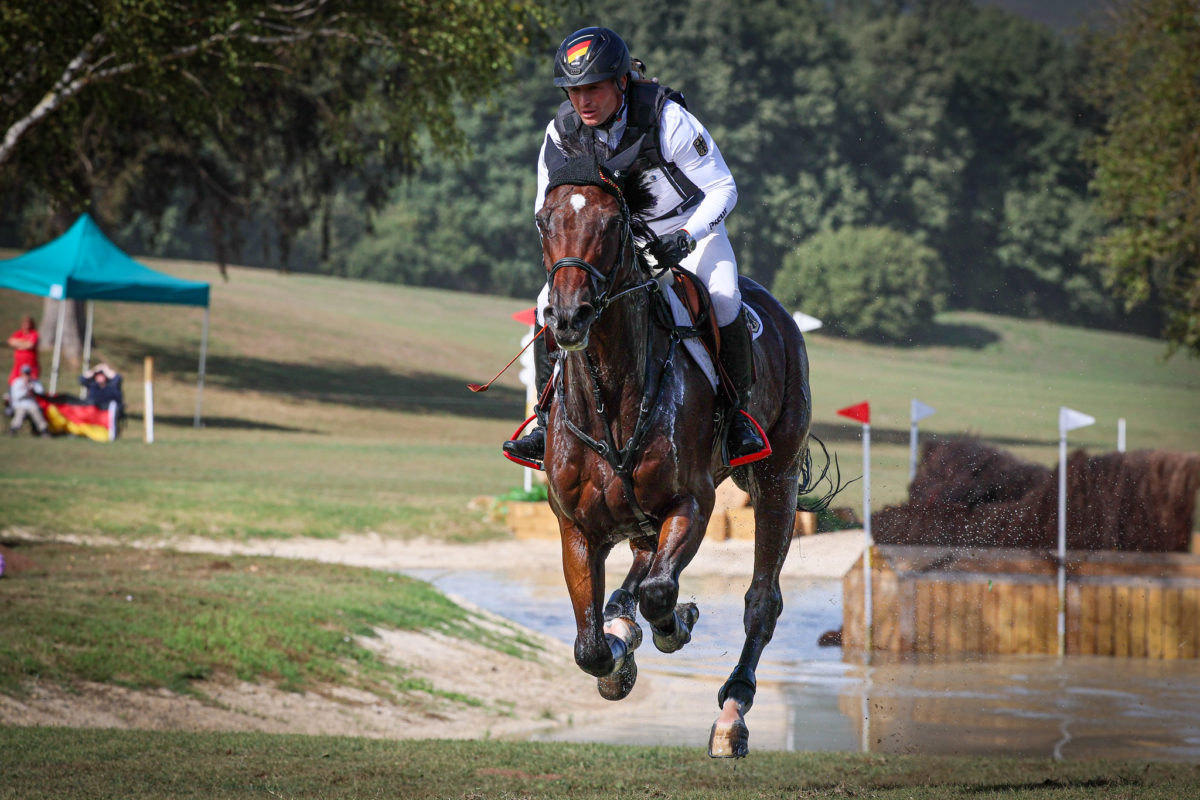 Horses, especially CCI-5* eventing horses, are pretty much the opposite of turn key.

Yet at the FEI Eventing World Championships at Pratoni del Vivaro, Italy, the Germans negotiated the 30 element cross country course designed by Guiseppe della Chiesa (ITA) rather seamlessly. On Saturday, they claimed the leading spot from Great Britain and head into Sunday’s show jumping phase as the ones to beat.

The campaign to dethrone them posts a lofty challenge. Michael Jung, Julia Krajewski, Sanda Auffarth and Chirstoph Wahler finished the cross country phase on a score of 76.1. The United States, though, are keeping the pressure on. They’re now closely behind on a 77.4 score.

Even if they manage to overtake the team, Olympic champion Michael Jung (GER) is still comfortably sitting on top of the individual standings with his currently unblemished record 18.8 dressage score. So beating Jung and 14-year-old gelding fischerChimpunk FRH is another story.

No rider has the luxury of hopping on a horse, pushing a few buttons and just steering, but for an accomplished talent like Jung it might feel that simple.

“He was great yesterday in dressage and today he was like a machine! At the end he was so super galloping and felt like he could do it all again,” said Jung.

“I was staying on the brake most of the way, I tried to keep him relaxed, and it’s fantastic how quickly he can think. He’s a big horse with a big stride and at that 7abc fence he was so super that I could jump the two hedges with a little smile on my face.”

To date, Jung has smiled his way to three individual European Championships, two individual Olympic championships and one individual World title. He is also a four times winner of the Land Rover Kentucky Three-Day Event (most recently with fischerChipmunk) and holds the record for best score at a CCI5* event ever.

At the moment, the closest to stealing away his second individual World title is is Yasmin Ingham (GBR) and 11-year-old gelding Banzai du Loir, but even she is not so close. They’re currently positioned for silver on 23.2 points.

Though in the sport of eventing anything can happen. Even the strongest contenders can fall subject to an error. Just take Laura Collett (GBR), who didn’t have the greatest day on the green with her Olympic gold medal mount, 13-year-old gelding London 52. The pair moved from second place all the way down to 48th after a “glance off” at the final element of the KEP Italia Slide.

“He was too fresh and too well in himself, he jumped off the top very boldly and he thought he was doing the right thing because he locked onto the skinny from the top of the hill and took me down to it and over-jumped. I needed to anchor him for three strides but he just ran out of room,” explained Collett.

Luckily for the Brits, Rosalind Canter, Oliver Townend and Tom McEwen faired better along the Pratoni cross country track. The terrain proved to be a challenge for many combinations, but not for Canter’s gelding Lordships Graffalo.

“He is just a phenomenal cross-country horse, he’s only 10 years old and it feels like child’s play to him! He experiences hills like that all the time at home whether he’s hacking or cantering so I knew he’d be able to keep his speed or accelerate up the hills and I think that’s key,” said Canter.

Townend, current world number one, offered some wisdom regarding why some of the most seasoned horses struggled while greener ones excelled.

“It is a very fair and cleverly designed test but I don’t think it particularly suits some of the older horses such as London, Ballaghmore Class, Toledo de Kerser who have been around big five-stars like Badminton and Burghley because this is definitely smaller dimensionally and you are up and down the hills and the terrain is tough. They want big open courses that they can attack,” said Townend.

Jung wasn’t about to let some hilly terrain stand in his way, though. Not when he is in contention to beat his own world record score from 2010 in Lexington, Kentucky. By the end of the day Sunday we’ll find out.