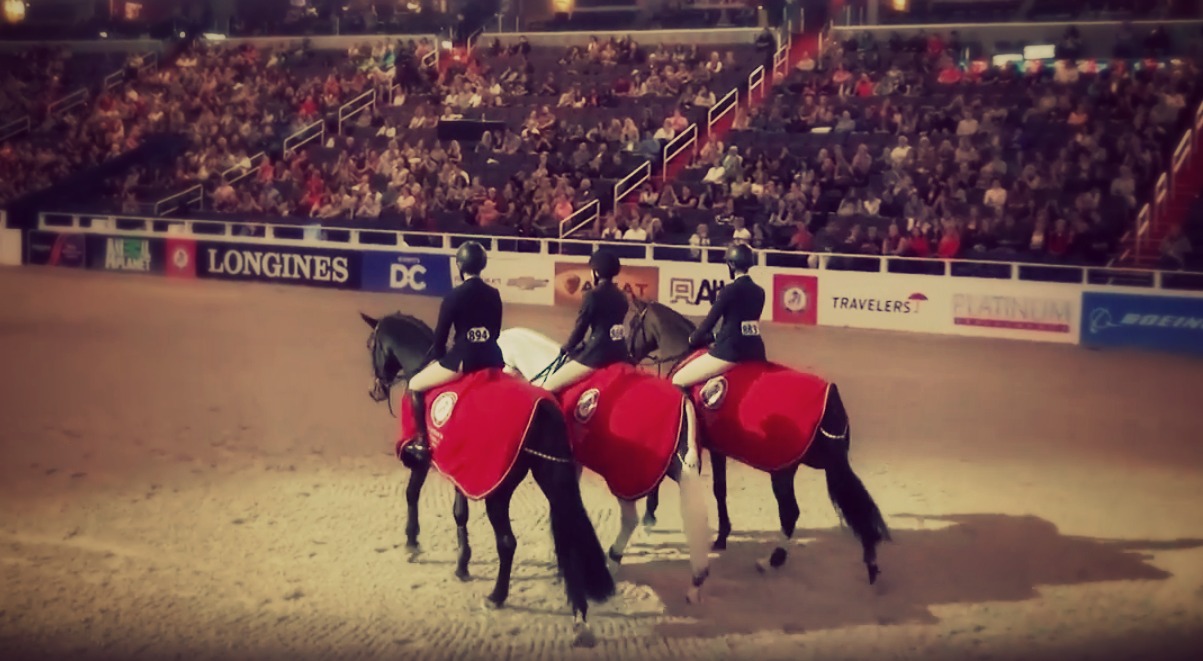 LOS ANGELES, CALIFORNIA—A reboot of the classic Big Eq reality series, Horse Power: Road to the Maclay is finally getting a long-awaiting remake.

Only this time, promises Executive Producer Joseph Santangelo, “We’re bringing our characters very much down to earth.”

The new production by the formerly defunct Mermaid Media, Horse Power: Road to the Washington, is already underway on the East Coast, with the penultimate episodes to film at the Washington International Horse Show in late October. The series is slated to air on Horse Planet in Spring 2023, and will once again center on the intensive competition between two of the country’s top equitation barns. Only, this time around, Santangelo says, his characters are just your average guy and girl next door.

“Road to the Maclay was a true classic, and remains so to this day. But I remember watching it and thinking, These kids aren’t your all-American Jack and Diane. These are some very privileged individuals that can afford to hire traveling tutors, lease a six-figure horse just for finals, and fly all over the country chasing points. This time, on Road to the Washington, we’re making our characters way more relatable.”

Among those featured in this installment, Santangelo says, are Jill Cross, a trainer’s kid who worked as a part-time tutor once a week for a full month to afford her Charles Ancona custom show coat. Also included in the series: talented junior rider Charlotte Winters, who occasionally stables her own string of junior hunters, equitation, and junior jumpers at her family’s 3,000-acre racing farm in Saratoga, New York.

“It’s hard for me when people talk about how fortunate we are in equestrian sport, and then say I don’t work for it, because there are several weeks during the competition year when I actually have my horses at home,” Winters explains.

“I’m not as involved in the day-to-day care, per say—or the tacking, or the post-ride care. We have staff for that. But I do all the riding on my horses when they’re at the farm, and there are a lot of them! There are so many days when I’ll finish with my at-home pilates instructor at 9 a.m. and go on to ride my own horses until late in the afternoon.

“I have my sights set on the Washington title this year, and I have certainly given up a lot to get here,” Winters continues. “I’ve been trying to get into top shape, and my nutritionist has me on this very intensive, all-raw vegan diet. I’ve literally had to say goodbye to my favorite imported sushi and estate-grown matcha lattes for three months. Trust me, I know about sacrifice.”

Then there’s Ralsick pickle heir Jeramiah Koeniger III, who’s personal essay on wealth disparity and privilege in the horse show community made headlines across major riding publications. Koeniger, for his part, says he has a keen understanding of the social and economic injustice inherent to the equestrian ranks.

“I’m not one of those kids who’s had everything handed to them,” he says.

“I clean my own boots. I’ve picked out my horse’s feet. I flew coach all season to qualify for Finals because my dad needed our corporate jet, and it just seemed silly to spend that money on First Class when there are so many in the industry, and beyond, that could use a helping hand.

“It’s those people who are in my thoughts and prayers, day in, day out,” continues Koeniger.  “That’s really the message I’m hoping to covey this season on Road to the Washington. You may look at me in the ring, and recognize my name, and make a snap judgment. But I think that’s just surface-level stuff.

“The truth is, you really don’t know a person until you’ve walked around in his Tom Ford loafers for a day.”