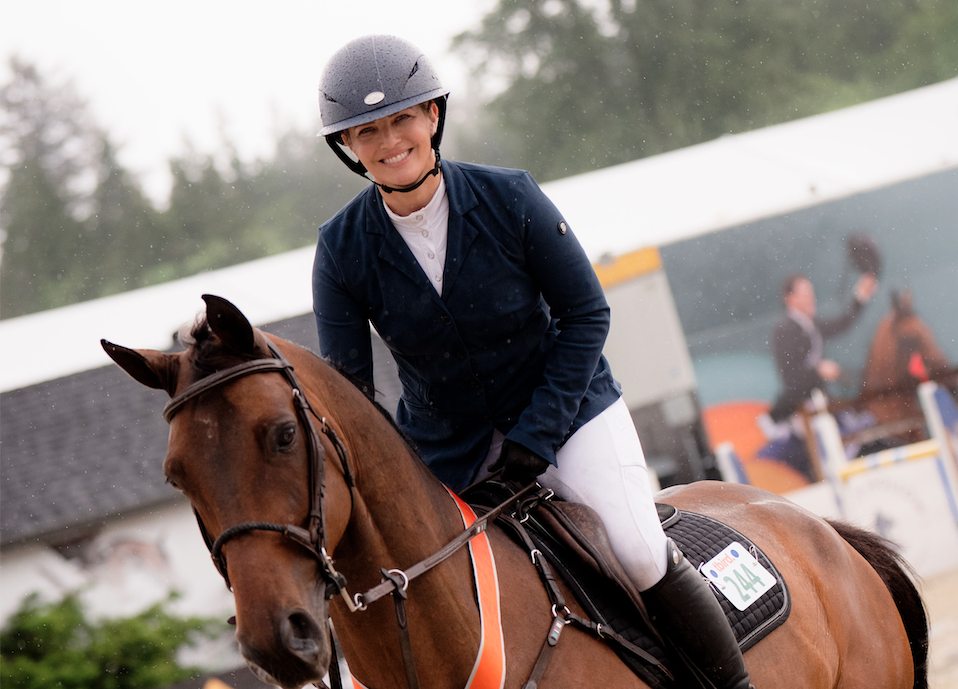 If you’ve ever met Israeli show jumper Ashlee Bond, or watched one of her interviews, the first thing you’ll note is her high-energy spunk.

A pink streak running through her hair, she’s been on fire along the Major League Show Jumping Tour this year with the leading Team Helios. In August, Bond jumped over to Herning, Denmark to compete in the World Equestrian Games with 12-year-old mare Karoline of Ballmore.

To sum it up, Bond is a go getter in and out of the arena. She is the type of person that makes someone like me desperately wonder, what is her secret?

I imagined it would be something I couldn’t possibly replicate, like a certain aura or show jumping super gene, perhaps.

I’ll be honest and admit that my energy levels are often at odds with my lofty ambitions. When I get out of bed in the morning, my first thought is how I can’t wait for the moment I return to the cozy sheets. *Sigh* There are just different types of people, I tell myself as consolation; the types that require 250mg of caffeine simply to function and the types that were born with the correct vitamin levels.

Turns out the same vibrant, spunky rider whose voice can be heard over the crowd cheering her team riders through their courses hasn’t always effortlessly exuded energy.

“I have Hashimoto’s. It’s an autoimmune disease of your thyroid which makes you super tired and I couldn’t lose any weight after I had my daughter…So I read about intermittent fasting and I decided, why not? I’ll give it a try,” explained Bond.

“Overall I feel much healthier and more active, and clearer mentally as well. My doctor said I am supposed to have a very high fat diet because of the way my body processes food, and that’s why I can go very long periods of time without eating and not getting shaky.”

Bond is also gluten-free on account of her Hashimoto’s, but we’ll save the gluten-free experiment for another day.

I don’t have Hashimoto’s, but I have gastroparesis, which is a condition that actually came in handy for this experiment (and likely the singular time in my life). Just like the name suggests, it is a paralysis of the stomach, where the level of paralysis varies case by case. In short, I don’t feel hungry without the help of some pharmaceuticals.

Of course, just like any other human being I still need to eat, but consolidating my mealtimes was easier than it is for most. And, easier for me to follow than Adrienne Sternlicht’s militant morning routine.

For full benefits and writer accuracy, I employed this lifestyle for a little over two weeks.

So what is intermittent fasting?

According to Hopkins Medicine, intermittent fasting is switching between eating and fasting on a regular schedule. In other words, it isn’t necessarily about what you eat, but when. Evidence points to significant health benefits related to thinking and memory, heart health, physical performance and managing a series of chronic conditions.

“If someone is eating three meals a day, plus snacks, and they’re not exercising, then every time they eat, they’re running on those calories and not burning their fat stores,” said Dr. Mark Mattson, a John Hopkins neuroscientist and intermittent fasting specialist.

The “metabolic switch” happens when your body stops burning through the calories consumed from your last meal and begins sourcing energy from fat stores.

The goal was to eat within a five hour window everyday. I typically run out the door with a half toasted, half raw Eggo waffle, so I chose to sacrifice breakfast and put my food window from 2:00-7:00 p.m.

You’re allowed to drink coffee (black), tea or any zero calorie beverage while you’re in your fasting window. Which, thank goodness for that, because apparently those empty Eggo calories did provide some sort of morning pick-me-up.

While black coffee drinkers might be the self proclaimed coffee elite of society, talking about bean flavor and notes of soil like wine connoisseurs, it disappointed me. I need caffeine in the morning but I also need serotonin, perhaps even more desperately. That bitter aftertaste is no way to put yourself in good spirits.

Luckily this is not the Mayo Clinic’s guide to intermittent fasting, it is Ashlee Bond’s, and she says we are allowed to use our own discernment.

“I do cheat. If I’m going to use a creamer I will use a regular Chobani vanilla creamer. Dairy isn’t necessarily something I have to stay away from, but I just find that using oat milk makes me feel better,” said Bond.

Thus I have never pulled creamer out of the refrigerator so fast.

You’re not meant to deprive yourself of anything or radically scale down your diet. Though you might find you eat a bit less initially only because it’s a challenge to change routines.

The first day I had my little bowl of quinoa salad at 2:00 p.m. and then turned to some work. I blinked and suddenly four hours had gone by. Despite dropping what I was doing it took me at least 45 minutes to prepare a pretty uninspiring dinner (I never made it on Master Chef, to nobody’s surprise), and I just barely finished my plate when 7:00 p.m. flashed across the clock.

A five hour routine has become Bond’s golden standard, but life isn’t always accommodating, so six to eight hours is also perfectly acceptable. As are the joys of dessert.

“Honestly, if I want dessert and I’m in my eating window, I’ll have dessert…that’s what’s nice about it. You don’t have to be so restrictive,” said Bond.

So It took me a little while to get into the swing of it, but it didn’t take long to start feeling more awake during the day. With my condition, a stomach ache after a meal is pretty much a guarantee. In the past doctors have recommended a series of smaller meals throughout the day to manage this, but for me that has just meant five smaller stomach aches. Resulting in feeling bleh all day.

On a regular dietary schedule I feel pretty sluggish. The intermittent fasting routine improved my energy levels because I only feel this way for a few hours. I might continue to practice this during rough periods because I felt alleviated, which encouraged me to eat more within the five to six hour period than I normally would.

It also helped me consider what I was eating, as it took some meal prepping/planning to maintain the proper eating window. While you might find fasting consistent with dieting, that isn’t necessarily the case. Being more thoughtful about what I was eating helped me ensure I was getting enough calories throughout the day, and I knew if I needed to shotgun an extra ensure.

You have to have a good measure of discipline to commit to something like intermittent fasting, even if you’re not bound by ultra strict rules. Bond is a top athlete so the super human show jumping gene is worked into her DNA somewhere. Things like mindless midnight snacking or late dinner date with your friends are easy excuses that tempted me to break the fast at times.

Also, the one French hotel breakfast whose smell of croissants alone got me out of bed. Luckily those fit in your pocket…