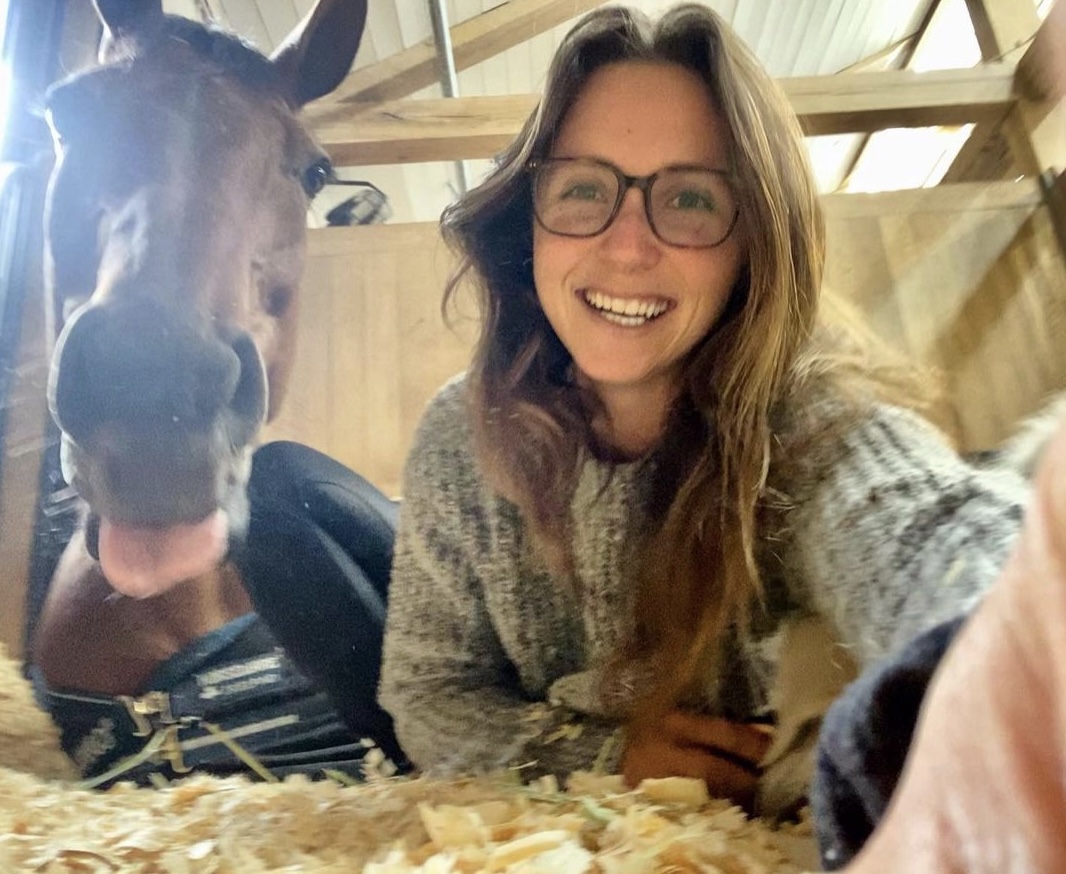 I’ve faltered at step-one every time. But alas, today I managed it.

To bring you up to speed: Sternlicht is a World Equestrian Games team gold medalist and Brown University graduate. She’s the kind of driven individual who wakes at sunrise and adheres to an intense performance maximizing, mind-sharpening morning routine designed for super humans.

I myself was born with the bats. I have a torrent of ideas and do household chores at 3:00 a.m., my midnight snack is akin to dinner. Of course, these habits get you close to nowhere in civilized society. Especially if you’re a horse person.

Long ago I decided that I love horses more than I hate mornings, which is why i’ve suffered a self-inflicted hard rewiring of my circadian rhythm. Horses have a special affinity for the crack of dawn, and if the sun is up you’re already late. I learned this from my years living in a room attached to the stable. At 5:59 a.m. they’re pawing at the doors like clockwork and discussing breakfast with loud nickers that will rival any farm rooster or iPhone alarm you (I mean me) might sleep through. Sprinting from bed, I’d be throwing on clothes with toothbrush in my mouth and then be tying my shoes in the grain room.

The point is that even though I’ve managed to get through early mornings these 25-years of life, it’s hard to fight your nature. Which is why this little experiment is particularly torturous, or funny, when I’m tossed into the equation.

Sternlicht happens to be the kind of person I once feared the most, a morning person. After pretending to be her for a day, well, I can’t quite say I’ve put that behind me.

“Especially on big days when there’s a lot at stake, I start with a freezing cold morning shower for three minutes. There’s so much science on it. It’s amazing for your metabolism and cortisol levels. It really just wakes you up for the day. Sometimes if you wake up in a bad mood, all you need is that shift that comes from a freezing cold shower. So it’s pretty cold, but after 90 seconds, your body is like totally fine and it doesn’t bother you.”

Truthfully, the act of waking up puts me in a bad mood immediately, so I was skeptical that thrusting myself into a polar atmosphere would improve it.

The one thing it definitely did was wake me, mostly because it activated my fight or flight instincts, and darting across the cold tile and into the embrace of a dry towel seemed to be the singular survival mechanism in mind. The jolt of adrenaline eliminated my usual grogginess, but at what cost?

I’m also a habitual shower singer, to the dismay of my roommates and neighbors, but the scratchy morning voice coupled with the chattering-teeth disrupted my usual scales and TSwift session. Like Sternlicht said, my body did adjust to the temperature, but in the way a cat admits defeat once it is fully drenched.

“And then the other important thing is that you don’t try to warm yourself up after, you let your body readjust to the temperature.“

So after surviving the three minute lifetime I was not allowed relief by either turning the dial to the molten lava degree or shotgunning the coffee pot. But step one, I was awake, a feat by any means.

“I make it a point to not look at my phone for the first 90 minutes I’m awake.”

I use my phone for an alarm, and because I often incorporate the alarm tone into my REM dreams I keep it on full volume next to my head. This makes it easy to roll over and flood my bloodshot eyes with blue light as soon as I’m done hitting the snooze for the fifth time, replying to any messages I’d missed from the day before. After that it’s a slippery slope, and suddenly I’m heading over to check Instagram or Facebook, maybe scroll through a news article or two.

It’s a bad habit, but unlike the shower it didn’t actually take much effort to change. I set my phone on “do not disturb” until 6:30 a.m. so that I wouldn’t even see any messages until then. It actually relieved some stress knowing that I wasn’t accountable to anyone for the first hour and a half I was awake. And do you truly even remember whose posts you saw on Instagram while bleary eyed and half asleep?

So, this one I will try and keep. However, maybe not for the length of 90 minutes. That would suggest I’d have to wake up that much earlier to start the day.

“Then I sweat. So I do like 25 minutes of some sort of workout.”

—Who sweats AFTER they shower? Adrienne Sternlicht, that’s who.

My days as a groom, running to grab a pitchfork to muck stalls in the heavy Floridian humidity first thing in the morning, prepared me well for this one. The difference is one was a responsibility, the other is a choice, and choices require considerably more self-discipline. Why go for a run when you could curl up on the porch with a cup of coffee, draping a fuzzy blanket over your head like a cloak?

Why, because Adrienne Sternlicht told me to.

So, my sneakers hit the pavement, and I imagined I was running away from this experimental article as motivation. Then, something amazing happened. Perhaps it was the Tiësto beats in my headphones, or the other morning joggers, fooled and throwing up waves as if I were one of them, but the fabled runners-high overtook my spirit. I wasn’t grouchy anymore, cracking a smile at babies and leashed dogs. Even I was beginning to believe my own charade.

Okay maybe I surprisingly enjoyed the run, what’s next…

5:58 AM: Meditate and Journal (about how much you hate mornings)

“Then I meditate and then I journal. So, that’s my way of starting the day. I like it because and I already start out doing something that I know is inherently good for me. And it’s not putting those things off that I inevitably want to do every day, but sometimes don’t find time for.”

After my running-induced surge of endorphins, meditating proved to be a challenge. I deduced it was because I’d reached the point where my brain was finally working. Telling it to be quiet after the fact is like trying to put jack back in the box.

Once I sat down, though, ignoring the stray intrusive thought that said I should use this time to take a 30 minute catnap in corpse pose, I slowed down and focused on my breathing. At least, that’s what the Youtube video about meditation told me. I’ve never done it, which might explain why I wasn’t any good at it.

The journaling part was the Hail Mary of this whole routine. A writer at heart, I scribble nonsense in journals at all points of the day. I carry one everywhere I go in case I’m struck by inspiration, but it reads like a messy train of thought; recipe here, line for novel there, idea for story sideways in the margins. Sometimes I can’t even read my own handwriting later. With confidence, this was the first time I devoted time for journaling. What came out was very…organized, a word I seldom use.

The Rest of the Day

Sternlicht is a World Equestrian Games team gold medalist for a reason. I would argue that starting her days out this way has certainly helped in her productivity and achievements, but it’s not for the faint of heart. Or the night owls, to be honest.