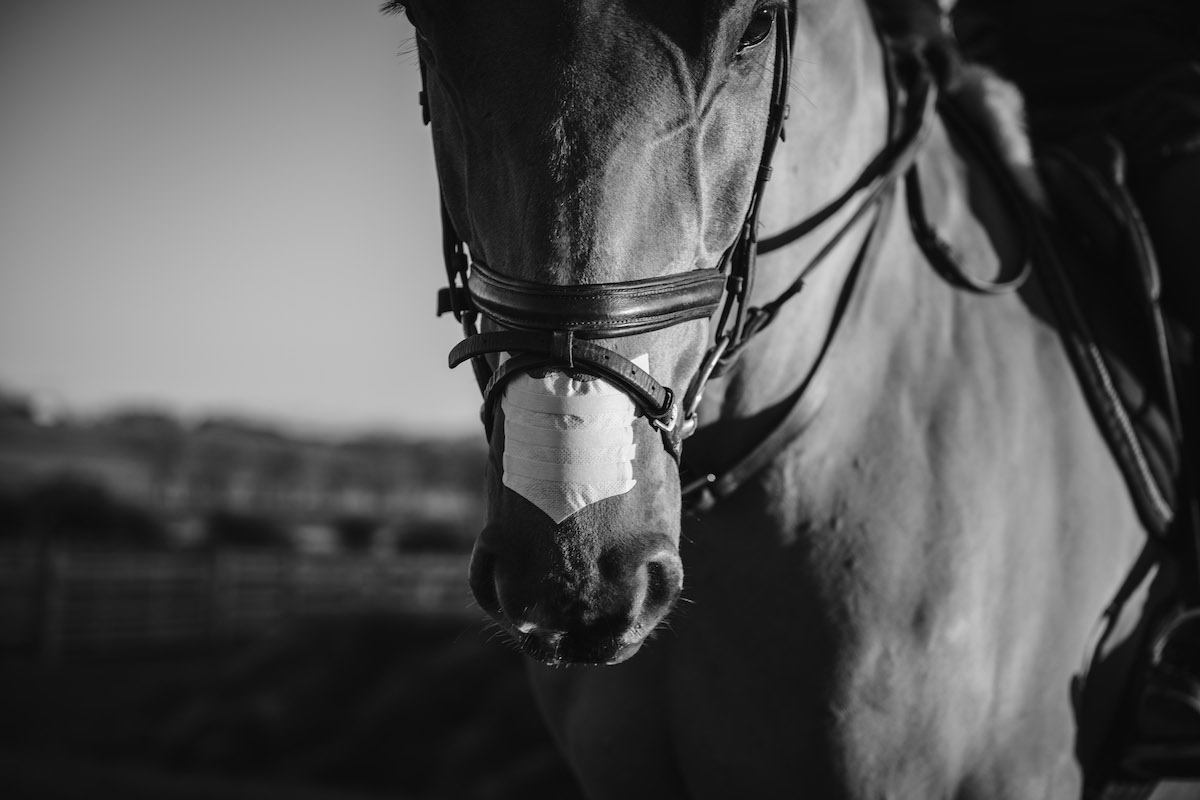 Racehorses wear them. Eventers too. More and more they’re showing up in the jumper ring.

FLAIR® Equine Nasal Strips, those BandAid-looking contraptions above a horse’s nostrils, are becoming a go-to tool in the relentless quest for improved performance in equine sports where tenths, or even hundredths, of a second can separate first from fifth on the leaderboard.

But nasal strips aren’t just for high performance equine athletes. They provide benefits for horses of all fitness and skill levels—and even those with breathing problems.

Unlike humans, horses are obligate nasal breathers when exercising, which means a horse can only breathe through his nose.

The spring-like action in FLAIR Strips gently supports the nasal passages to reduce soft tissue collapse, so the horse can take in the same amount of air with less work to maintain respiratory health and optimum performance.

The same is true of upper airway conditions, like roaring, gurgling, nasal flutter, alar fold collapse, and functional obstructions, such as significant poll flexion. They increase the work of breathing.

At a canter and gallop, horses take one breath for each stride, inhaling when the front legs are non-weight bearing and exhaling when they are weight bearing. This synchronization of stride and breathing is known as “respiratory-locomotor coupling.”

Because of this link, anything that affects the horse’s breathing also impacts his stride. The faster the horse gallops the longer its stride and the deeper and longer breaths the horse takes. A horse struggling to move air in and out of the lungs may fatigue more quickly or shorten its stride to compensate for the increased work of breathing in.

The amount of air moved in and out of the lungs increases in direct proportion to how fast the horse is running. If a horse runs twice as fast, it must move twice as much air in and out.

Performance horses wearing FLAIR Strips have been shown to use 5-6% less oxygen and produced less carbon dioxide when bringing air in during intensive exercise than when doing the same amount of work without a FLAIR Strip. Using less oxygen means less energy is consumed, which helps delay the onset time to fatigue and potentially reduces the chance of fatigue-related injuries, such as pulled ligaments, bowed tendons and fractured bones.

Numerous studies show that essentially all exercising horses experience some degree of EIPH during intensive exercise. But only 5% show blood at the nostrils. As a result, EIPH often goes undiagnosed.

What’s more, horses don’t have to gallop to bleed. While fast gallops, work on very hard or soft surfaces and carrying more weight creates the potential for more damage, research from Japan showed that horses cantering at speeds of up to 20 mph (a very slow canter for a racehorse) all had damage to their lungs as a result of broken blood vessels. Some studies report that lung bleeding in horses can even occur when doing mild exercise such as trotting on a treadmill.

FLAIR Strips are clinically proven to reduce resistance to breathing, which puts less stress on the pulmonary blood vessels, resulting in fewer ruptured blood vessels in the lungs. In fact, FLAIR Strips have been proven to be as effective as the drug Lasix in reducing lung bleeding during high intensity exercise.

Find out if FLAIR Strips are right for your horse. Learn more at https://bit.ly/flairstrips.