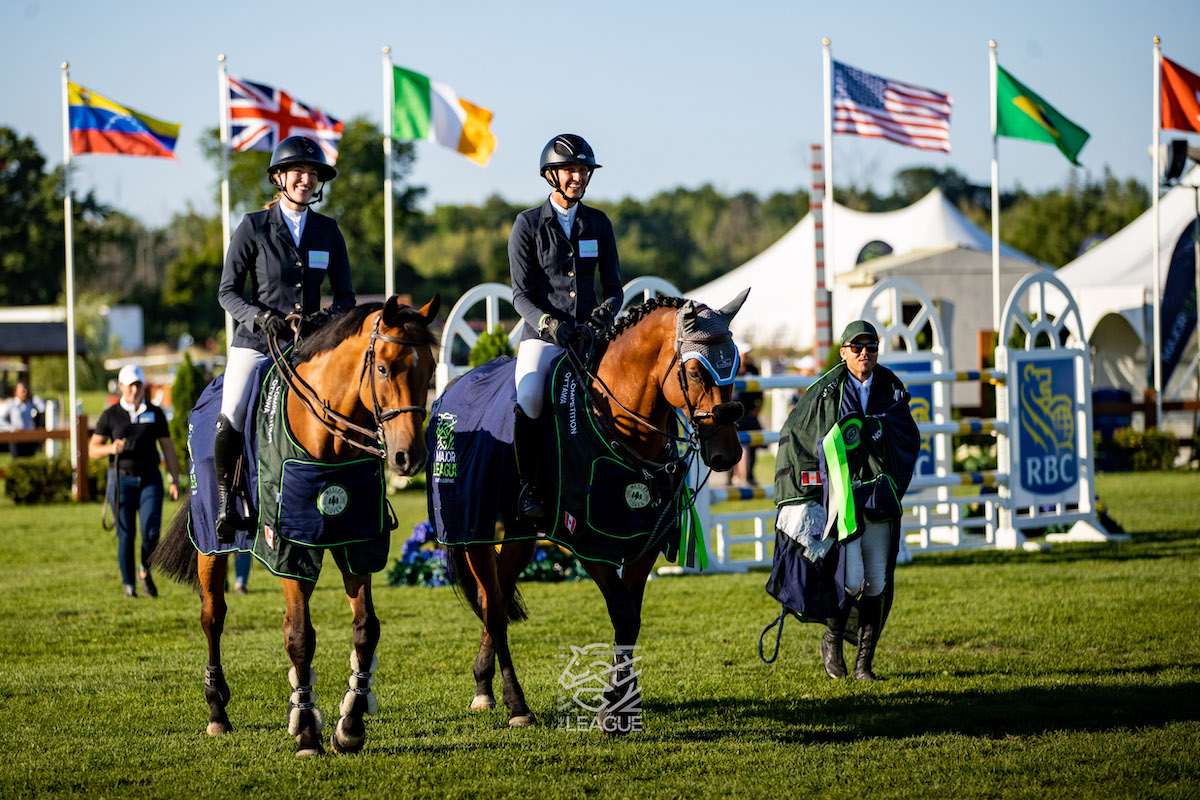 Between world no. 10 Kent Farrington and top ranked female rider Erynn Ballard, Lugano was one of the strongest Major League Show Jumping teams on paper this season.

But their results in the team event have not lived up to the promise. Until now.

Team Lugano, represented by Farrington, Natalie Dean and Vanessa Hood, jumped from the lowest rung on the team standings to the top of the podium at MLSJ Ottawa on Saturday.

“Took a minute. But we’re here now,” said Farrington. “The girls rode great. So we finished with the top result.”

With shocking twists and the odd wrong turn, MLSJ Ottawa brought the biggest shake up in the podium and the standings to date.

Helios did not make the cut

The fire went out on 2022’s most dominant MLSJ team in Ottawa.

Helios rode the same team that captured gold in Traverse City in Simon McCarthy, Mark Bluman and, for the second time, substitute rider Sydney Shulman Desiderio. But they weren’t able to reproduce the result.

Second to go in the draw, the wheels came off the Helios winning machine when every rider faulted in the first round, Bluman twice, to end on a team total of 16. Helios finished up seventh overall. And they’re officially out of subs. (Teams are limited to two rider substitution per season.)

But they’re still atop the team standings, so there’s that.

Eye Candy fielded last season’s most winning trio with Amy Millar, Jacqueline Steffens and Paul O’Shea taking up the reins for MLSJ Ottawa. But an uncharacteristic eight faults from Millar and Christiano tied them on faults with Team Lugano in round one. They ended up seven seconds short of the cut line on a team time of 229.28 to just miss qualifying for round two.

Eye Candy has now slipped to fourth on the team standings with 19 points, sitting just one point behind the Crusaders (20). Can they stage a comeback in Traverse City?

Crusaders fought their way into third

Roadrunners’ Alberto Michan, Kristen Vanderveen and Alexis Sokolov brought the team spirit at MLSJ Ottawa with the loudest cheering section ringside, but it wasn’t enough to get them on the podium.

The team advanced to the second round with a team total of seven faults, highlighted by a clear from Michan and Bugatti and single time fault from Vanderveen and Bull Run’s Prince of Peace.

Crusaders’ also made the cut, incurring a single rail in round one with clears from Nicholas Dello Joio and Hunter Holloway, but slower times by the pair in round two ultimately relegated them to the bronze medal match.

Crusaders Callie Schott faced off against Roadrunners’ Sokolov for the medal. Sokolov had the time, but toed the final oxer to add three seconds to the clock. Heart. Break.

Spy Coast Spies, represented by powerhouse combination Lacey Gilbertson, Margie Engle, and Shane Sweetnam, looked poised to log their first win on the season after positively dominating the first and second round as the only team to post five clears.

Until the last, that is.

Team manager Sweetnam was on track to clinch the gold in a head to head match up against Natalie Dean and Maestro Vica v/d Ark, when a stop at the water table aboard Birdy du Thot put paid to the Spies hopes. Now with three runner up finishes this season, the team wins for most consistent results and has closed the gap between them and Helios on the team standings (25 vs 32 points).

But always the bridesmaid? That stings.

Tied on eight faults with Eye Candy in the first round, Team Lugano squeaked into the top four based on their speedier team time of 223.33. But they came out guns blazing in the second and third.

Kent Farrington and Austria 2 assured their position in the gold medal match with the fastest jump off time of the day, 42.73 seconds, while Dean posted the third fastest time of the day in 43.83 to take the top spot on the podium.

“We decided as a team we were going to try to produce a better result this week than in the past,” said Farrington. “So I think we all rode our best horse for that class today.”

Mission accomplished. Lugano has now climbed two spots up the team standings to sixth on 16 points.

MLSJ next returns to Traverse City for the American Gold Cup, Sept 15–18. Catch all the action on MLSJ TV.