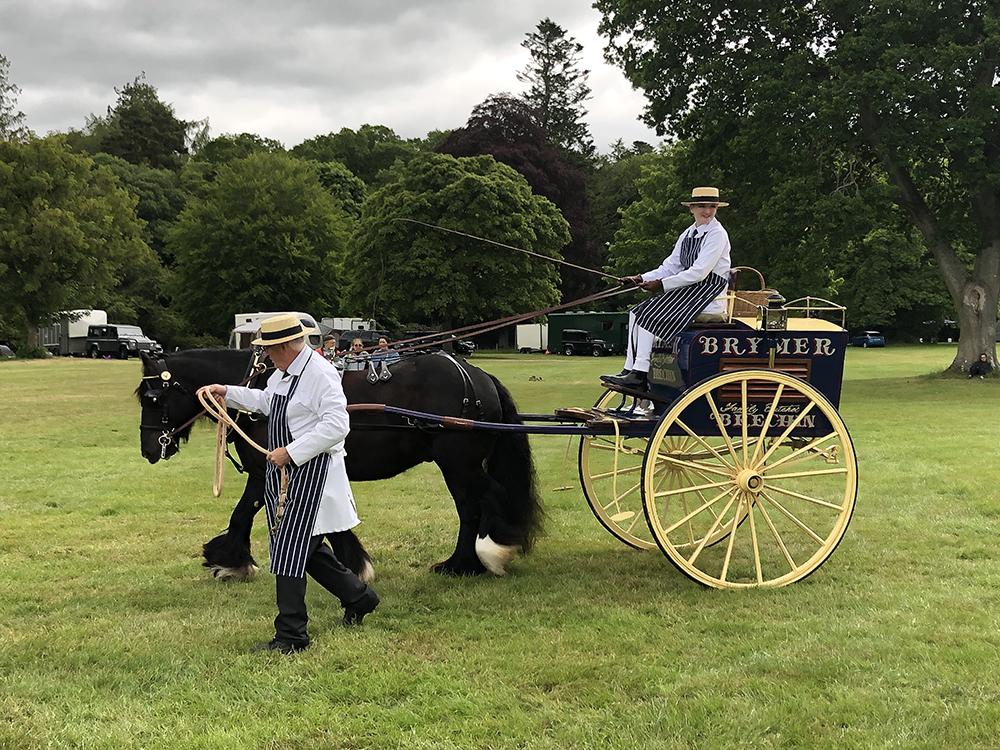 Glamis Castle is a handsome 14th-century castle in the Angus region of Scotland. A perfect way to spend the day.

Early on in this adventure, I made a rule. No horses, no cameras. Light and breezy sightseeing was what I was after and until this day, I had no regrets.

As I drove through the wrought iron gates, a horse and carriage trotted passed my car and disappeared down a wooded lane. I was unsure as to what I’d seen, though I was sure I had spotted a bowler hat.

My initial thought, admittedly a sinking one, was that the castle was doing some sort of theme day. You know the sort of re-enactment that aims to make us feel as though we’ve slipped back into the 1600s or similar. I struggle with this sort of thing. I love history but I dislike pretending the kitchen maid is anything other than a retired librarian from the neighbouring village. Nonetheless, I drove onward.

The drive to the castle was close to a mile long, lined with trees and rolling pastures, much as you would expect. With each passing tree and dip in the road Glamis Castle slowly revealed itself.

As I marvelled at the beauty of it all, I saw another horse and carriage.

The driver and passenger of each were dressed smartly. But there were too many to be a re-enactment, and they appeared in four-minute intervals. I thought perhaps I had stumbled upon a combined driving event. But that didn’t make sense as they would have been doing the marathon in their finery.

I was, it has to be said, confused.

I parked the car and brushed passed the castle to try to find someone that looked like they knew what was going on. The beautiful thing about horse people is that no matter where you are in the world, we tend to have a certain look. A signature style that says, “Yes, I have horses.” Is it the inevitable vest with brimming pockets? The unkempt hair with signs of good intentions? Or is it the well worn, yet expensive, footwear? It is hard to put your finger on exactly what it is, but we always know a horse person when we see one.

I found a woman who fit the description and asked her what type of competition was going on.

I was no less confused.

The sport of Attelage

Attelage, as stated above, roughly translated means, animals hitched together, such as horses.

The sport, properly known as Concours International d’Attelage de Tradition, is a combination of private driving and combined driving and was developed as a means to prevent older carriages from falling by the wayside. Keeping the tradition alive, I believe could be their motto.

Private Driving harks to a time when a passenger might say to the driver, “Home, James and don’t spare the horses.” Elegance is the key word here and anyone sitting in the carriage is judged on their attire. Though the carriages must be in the design or vintage pre-dating the First World War and include such things as metal wheels and carriage lamps, the wardrobes must be suited for the occasion but, in no way be a costume, period or otherwise.

Combined driving is the driving version of eventing. It features a dressage phase, a marathon with maze-like obstacles to be negotiated (similar to cross country) and in lieu of show jumping you have cones, a course of cone obstacles with a tennis ball perched on top through which the carriage must pass.

While driving sports naturally lean towards the traditional, attelage embraces it wholeheartedly. The competition is designed to promote both private and trade carriages that pre-date 1945. The event itself is to reflect the heritage and skill of driving harness horses and ponies.

Much like combined driving, there are three phases or stages as they are called in the attelage world.

Stage one: Presentation. This is a standing presentation where multiple judges scrutinize your turnout three different times in three different locations. Every detail of your horse, your harness, your carriage and your outfit are under inspection. The goal is clean, shiny and fit for (original) purpose.

For example, I saw one lady who had a traditional milk cart, and therefore every detail from the cart, the horse, the outfit and the groom had to be as close to the period as possible.

Stage two: Routier (road drive). This is a 15 km drive down quiet country roads or the roads around an estate such as Glamis. There are five difficulties to negotiate within an optimum time, which is set to suit your horse or pony’s stride. These difficulties are representations of things you may experience on a pleasant Sunday drive. Each “experience” is scored on how well you manage to tackle the challenge.

One example is driving your horse to a small table, picking up a glass of champagne, asking your horse to move forward and setting the glass down on the next table. It sounds simple, but it sure didn’t look it.

Another was a narrow lane, marked by cones and spray-painted grass. As the driver walked through the lines, loud music would spontaneously blare out of a radio. The goal is to stay the course and not let the powerful voice of say, Meatloaf, throw you off track. The inspiration no doubt came from teenagers and their cars.

Stage three: Maniabilité, which is similar to the cones in combined driving. The objective is to leave all the balls on top of the cones, normally 20, within the optimum time. The course is usually designed in a gentle sweeping style. As each carriage is a different width, the cones or “gates” are adjusted per team.

Unlike most other competitions, the sport of attelage likes to keep the competitors on tenterhooks, and all the scores and overall winner are kept a secret until the end of the day.

There are different classifications of competition for a variety of turnouts, and multiple different horse configurations such as singles, pairs and all the way up to teams of six.

Though this is a new sport to me, and likely a large part of North America, it is popular throughout Europe, most notably in France, Spain and Italy with up to 90 traditional turnouts at each event. The sport is gaining popularity, too—currently, 16 nations belong to Association d’International d’Attelage de Tradition (AIAT).

Maybe one day Canada and the United States will be added to the list.