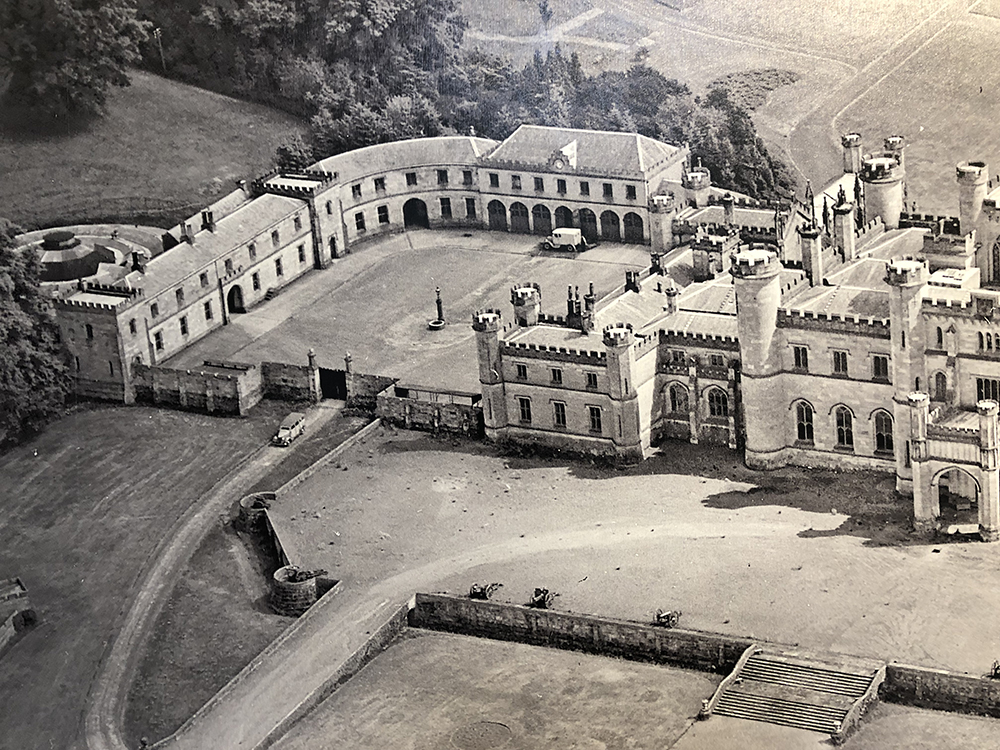 I’m living life on a whim these days, going wherever the wind blows me. Generally, it’s in the direction of horses or castles. Once in a blue moon, the two collide. Which for me is perfection.

Perhaps it’s their turbulent history, or the romance hidden within the crumbling walls, but castles in a state of ruin intrigue me to no end. And so it was in Penrith, Cumbria, that I found myself driving toward Lowther Castle, for no other reason than because it is in disrepair.

Why is it in such a state? In 1957, the contents of the house were auctioned off and the roofs, walls, buttresses and windows removed to avoid paying the crippling death taxes that landed somewhere around the £2 million mark.

James Lowther, the 7th Earl of Lonsdale and the present-day owner of the castle, decided it should be a place for the public to enjoy. The grounds were spruced up and the gardens replanted to a glorious splendour. In a unique fashion, the garden spills into the shell of the most enormous ruin, filling the rooms of what used to be a grand place to live.

Enchanted, I walked under the first imposing arched door, which then revealed the most fascinating element of the estate, the stable yard.

The stables and carriage house, now a Grade II listed building, was designed by Robert Smirke for the 1st Earl of Lonsdale in the early 1800’s. It was designed in a horseshoe shape and comes complete with battlemented parapets and turrets. There are seven carriage bays, numerous stalls for the horses and a courtyard large enough to fit a modern-day home.

Today, the stables have a decidedly different job, which is to house a restaurant to feed the many visitors that stream through. The arched entrances into the carriage bays are now enormous windows with a view into the courtyard.

Yet, it’s easy to envision the horses and riders milling around the courtyard getting ready to head out for morning gallop.

The old tie rings, the same as the ones we use today, are still affixed to the sandstone walls. Rusty now, as you might expect, they hang as though waiting for the next horse to be tied up. No frayed orange or blue bailing twine to be seen, however.

Even the washrooms have a distinct shabby chic equestrian feel, with a great long trough sink that spans the length of the public bathroom for example.

The Lowther family had keen interests in racing, carriage driving and hunting and boast a long list of accolades. It includes importing some of the founding stallions of English racehorses, Viscount Lowther establishing one of the first foxhunting packs and the 1st Earl of Lonsdale reigning, for a considerable time, as the Master of the Cottesmore Hunt.

Most interestingly, perhaps, was that Sir James Lowther was one of the founding members of the Jockey Club, an “original nineteen,” as they call it. In 1762 the Jockey Club came up with the first 19 sets of racing colours. Lowther opted for orange but later changed his colour to yellow silks with a maroon cap. Yellow was a running theme with the Lowthers.

A few generations later the 5th Earl of Lonsdale, Hugh Lowther, also known as the Yellow Earl, became the president of the Royal International Horse Show at Olympia. He was a reasonably successful racehorse owner and made sure all his carriage horses were matching chestnuts, because why not?

The Yellow Earl also started the Lowther Horse Driving Trials and Country Fair in 1973. Prince Philip often competed in these trials, and was even invited to stay in the castle with the Earl, adding a certain royal flair to the occasion.

A man of many names, the Hugh “Lordy” Lowther, the Yellow Earl was all about high society, horse racing and foxhunting as well as, curiously, boxing. His spending habits, which extended to travelling with a 24-piece orchestra, making sure his horses matched, owning racehorses and living in a castle came at a hefty price. When the Great Depression hit, Lordy and his wife felt the best thing they could do was to abandon the Castle, leaving each room fully furnished and decorated as though they were simply stepping out for a day of shopping.

During WWII, an army tank regiment took over the castle. Then, a decade after the war the death taxes were due, and the roof came off. The Lowther Driving Trials and Country Fair continued until 2019 but was cancelled after the first day of competition after torrential rains turned the footing into a quagmire. The show hasn’t run since.

It’s a sad ending. The hay day of the Lowther family foxhunting, carriage driving, horse showing, horse racing and living the high life have faded away and live now only within the crumbling walls of the castle.

Yet, should you find yourself near Penrith, Cumbria you won’t regret spending a day at the estate envisioning the grandeur of days old.