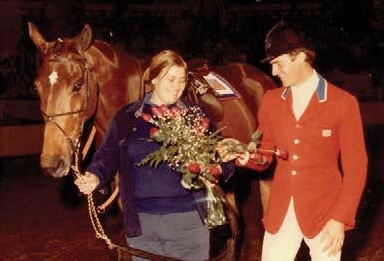 Karen Golding’s care of some of this country’s top horses impacted the success of American show jumpers for over 30 years.

Born in England (she became a U.S. citizen in 2004), she had ponies and a horse as a child, and learned to drive, show in hand and show in the junior jumpers. An elderly caretaker at a farm at which she kept her pony taught her all the “old” remedies and sparked her interest in the proper care of horses.

In 1970, a chance meeting with Bernie and Tiff Traurig in England led her to the United States as she flew with a load of 27 horses that the Traurigs had bought in Europe. She did this three more times that year, and wound up going to work for Bernie at Bloodstock Farm in Pennsylvania, where she stayed for three years. While there, she cared for the hunter Royal Blue, and the great jumper, Springdale. The horses were subsequently sold to Winter Place Farm, and Karen went with them.

Bernie continued to ride them, and became a regular rider of the Winter Place horses, and Karen cared for the horses he rode. Those horses included a young Jet Run.

In the fall of 1974, Karen went to work for Jerry Baker and Michael Matz at F. Eugene Dixon’s Erdenheim Farm. That led her to her first Olympics, in 1976 in Montreal, with Michael and Grande. In 1977, Dixon bought Karen’s old friend, Jet Run, from Fernando Senderos of Mexico, and the relationship that had started at Winter Place resumed and lasted until the horse’s death in 1996.

Under Karen’s care, Jet, along with Michael’s other horses, compiled a record of incredible success. Recognizing her exceptional talent in preparing horses for competition, the USET employed her for international competitions.

Working for either Michael or the USET, Karen attended every Olympics from 1976 through 2000, except for 1984, in addition to numerous Pan Am Games, World Championships and World Cup Finals. Some of the great horses that came under her care included Springdale, Jet Run, Mighty Ruler, Grande, Sandor, Chef, Rhum IV, Bon Retour, Heisman and Judgement.

Karen stayed with Michael until 1998 when she decided to turn her attention to other areas of the sport. She became an FEI steward in 2000 and quickly gained a position of respect among national and international riders. She was selected to work as a steward at Olympic and World Equestrian Games Selection Trials and was Chief Steward at the World Cup Finals in 2003, 2005 and 2007.

Tough, but fair, she has always held horses’ welfare as the highest priority. She also turned an interest in equine therapies into a side career as an equine massage therapist. This allowed her to continue her one-on-one contact with horses that gave her a reputation as one of the best the show jumping world has ever seen.