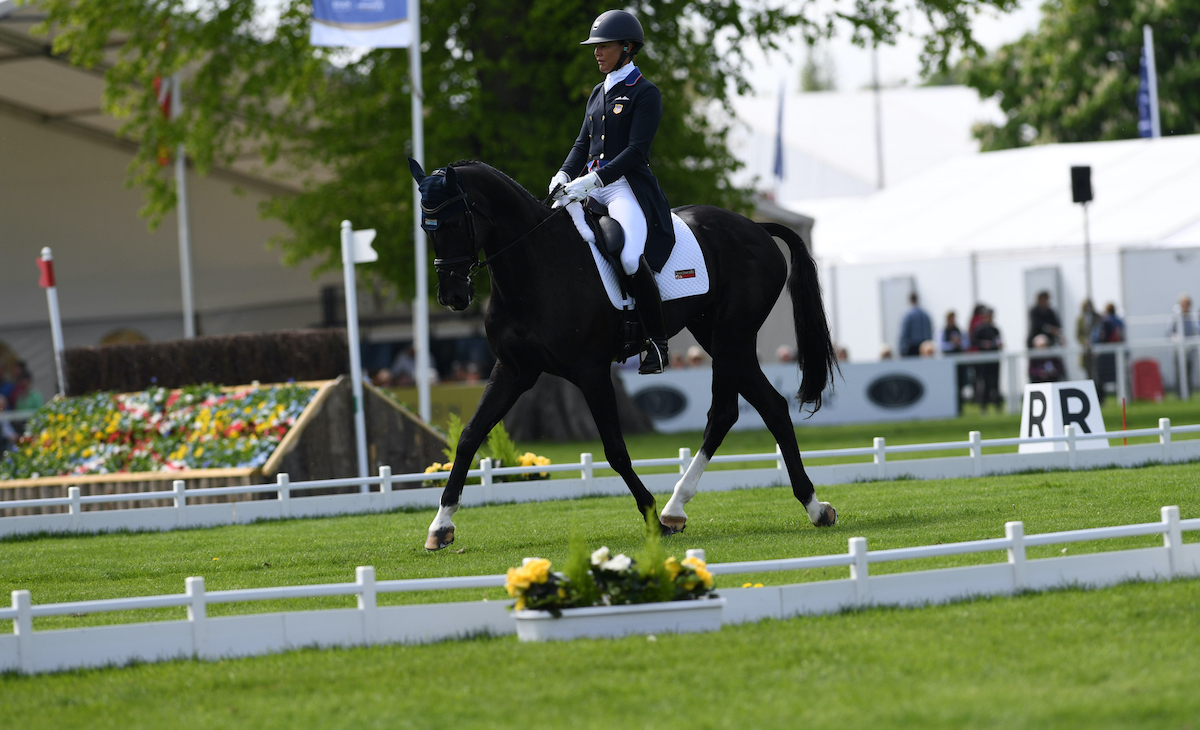 It was a day of sunshine, dressage and excitement at Badminton Horse Trials. Twenty twenty-two marks the glorious return of the CCI5* event in the UK after a two year COVID imposed hiatus.

With a camera slung over each shoulder and excited about my first competition day, I headed out to capture dressage.

Perhaps it was the jet lag that is still robbing me of sleep but all I managed to do during the first group of riders this morning was position myself in the wrong spot. There are many areas where photographers and the public are not allowed to go, and I can assure you I found all of them.

Eventually, I found my location (pro tip: look for the other media photographers) in a small cordoned-off area just inside the arena and proudly stood on the very grass that so many greats have galloped across. And then watched as many more did.

Olympic gold medalist, Tom McEwen (GBR) and Toledo de Kerser, the fourth pair in the main arena today, put up the winning score of 23.4, which held as the next 37 riders entered the ring.

“It’s a shame he didn’t do that test in Tokyo,” quipped McEwen, who also won the Olympic individual silver medal. “He was phenomenal, the half passes were lovely, he was smooth in his body and kept up a great rhythm, and it was pretty well mistake-free.”

Two more Brits join him on the overnight leaderboard.

“He was tricky yesterday, breaking in all his medium trots, which made me a bit stressed,’ said an emotional King of her 2021 European team gold medalist. “He was much more ‘with’ me when I rode him this morning—I did a lot of walking and practised my halts.”

That practice paid off. Kitty earned a 10 for a halt: “I didn’t know about the 10, so when there was a gasp from the crowd as I went in to medium canter I thought ‘yikes, where am I going?.’ I’m not used to getting 10s!”

Sitting just 0.1 of a penalty behind her are the 2021 Luhmuhlen five-star winners. Summerland’s 13-year-old bay Hanoverian picked up an injury after his big win and only returned to FEI competition last month, finishing 26th in the Burnham Market CCI4*-S.

“He means the world to me and just to be here with him—to ride in that arena with him was a privilege,” said Summerland.

‘I’ve found it tough since Luhmuhlen, putting pressure on myself with altered expectations. To be honest I feel a little bit shell-shocked. I’ve never ridden in front of crowds like that and I’m so proud of him. He deserves that score.’

USA’s Tamra Smith riding Mai Baum put in a brilliant test and are the top-placed American pair, sitting in fourth place on a 25.3, only 1.9 behind the leader. Their final salute was met with an eruptions of cheers, to which Mai Baum, fighting fit and ready to rock cross-country, responded by snacking on some grass at X.  Such a handsome and well-behaved horse.