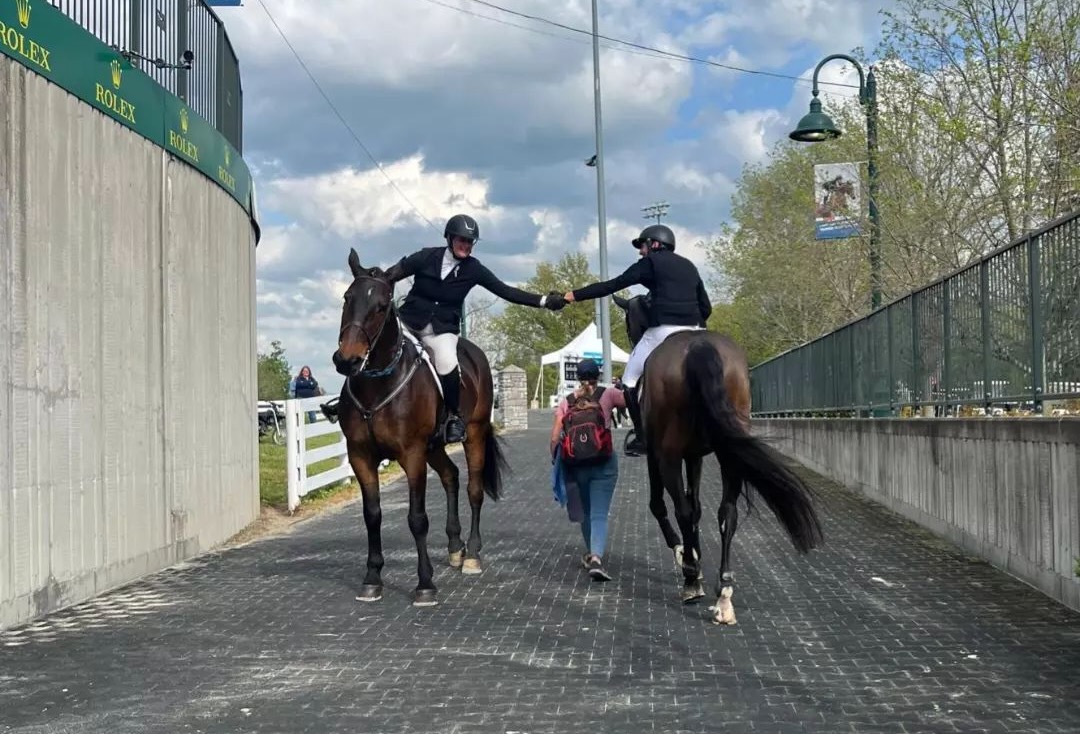 The Kentucky Horse Park is one of the biggest venues in the world, at its liveliest over the CSI5* Land Rover Kentucky Three-Day Event (LRK3DE) weekend. The world class event attracts over 80,000 spectators and exhibitors, including legendary masters of horse sport.

This year, the crowds bore witness to sport history beyond eventing.

Para athletes have a long standing history in equestrian sport. Para-equestrian is governed by the FEI and made up of two disciplines: para dressage, which has been part of the Paralympics since 1996, and para driving.

Jack Goldberg, a 17-year-old rider with cerebral palsy, hopes to add jumping to that list.

Goldberg was one of five riders riding in a para jumping demonstration at the Kentucky Three Day Event last weekend, highlighted by a pre-Grand Prix competition on Saturday before a packed stadium.

“I’m not going to lie. I was a little bit nervous because I hadn’t ridden in front of a really big crowd like that before,” confessed Goldberg.

“But as I was warming up, I just realized that I’ve ridden for pretty much my whole life and even though there’s a bigger crowd, just to focus on my riding and my connection with my horse, Clementine, and what I can do to help her.”

Goldberg was born with cerebral palsy after suffering a stroke in utero. As a result of cerebral palsy, Jack is partially paralyzed on the right side of his body, a condition known as hemiplegia. He’s also been diagnosed with epilepsy and scoliosis. Despite being unable to use his right arm and leg to their fullest abilities, the young rider, who trains with Olympic outfit Millar Brooke Farm, has been hot on the hunter and jumper circuits for over a decade. He’s competed against able-bodied individuals his entire life, as there is currently no para jumping league in North America.

Now, his goal is to change that.

Together with Wren Blae Zimmerman, a para athlete with Stargardt’s macular dystrophy, a progressive degenerative retina disease that has caused her to become legally blind, amputee eventer Mellisa Davis Warden, amputee jumper Lily Rhodes and Gianna Trotter, a para jumper with partial paralysis due to a car accident, Goldberg performed in a series of jumping demonstrations at LRK3DE.

Their mission: to show the public that para jumpers are here, they’re competing, and they deserve equal opportunity in every facet of life, including the show jumping arena.

“We want to raise awareness for people with disabilities, whether they are in the sport or not. I think it’s really crucial, and having [show jumping] instated as a sport in North America would be incredible. That’s our ultimate goal, in addition to having it one day be in the Paralympic Games,” explained Goldberg.

“But aside from that, I think that as we demonstrate what we can do, it’s really important to know that people with disabilities sometimes don’t have the same rights as people that are able bodied.”

Every one of the para riders, said Goldberg, worked to make the LRK3DE demonstration a reality: “Every para equestrian there has done so many things in their power to help the cause—whether that’s raising awareness on social media or working with governing bodies that regulate our sport. We’ve all done something to push the movement forward.”

Para show jumping isn’t a novel idea. The UK and Europe already offer competitive jumping opportunities to riders with disabilities. While para dressage is an Olympic sport, the same allowance hasn’t yet been made for show jumping.

To challenge that idea, Goldberg started a petition when he was 16 to gather support for para jumping so that it can someday have its own league in Canada and the United States, as well as be instated in the Paralympic Games as its own official sport. It has since gathered almost 4,500 signatures.

“When I launched the petition I wasn’t really expecting anything of it. I thought it would just be something interesting that my friends could sign so that we could generate some support and eventually, you know, show that to people…when it started to gain the attention that it did, it was such a shock,” said Goldberg.

“To have that many people sign a petition and show that they care and want the best for people with disabilities [was incredible].”

Goldberg believes the path to a para show jumping league is through education and awareness, which is why there was so much riding on the demonstrations at the KHP. The para athletes held an informative Q&A session post ride, where they encouraged the public to ask questions, even potentially uncomfortable ones.

“It almost broke down a barrier in a sense,” said Goldberg after the presentation.

“I think that that’s something that was so cool is that we got to answer a few questions that enlightened everybody and that really brought awareness to disabilities, not just in the world of sports, but throughout the world in general.

“At the end of the day, we’re all just people and we deserve equal rights no matter who we are or what challenge we face.”