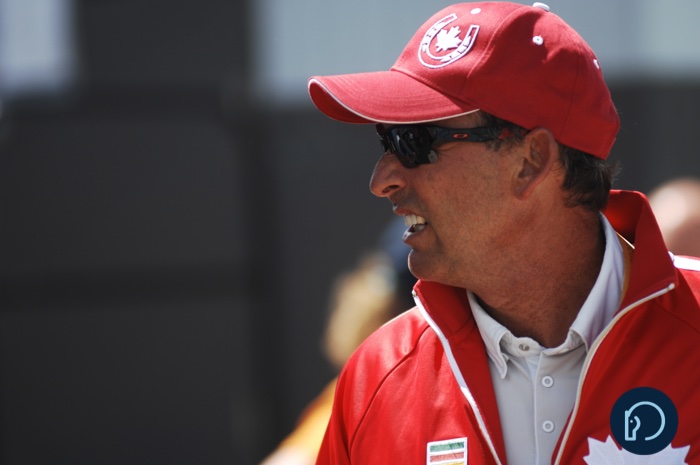 If you’ve checked out the teams set to contest the CSIO5* Nations Cup Ville de La Baule this week, you may have noticed a surprise Canadian amongst team regulars Tiffany Foster, Amy Millar and Beth Underhill.

Olympian Yann Candele back in the mix.

The highly decorated rider has been absent on the world stage for the past few years—Candele is not currently on the world rankings—for lack of horsepower. Team Canada’s new chef de’équipe and Candele’s former teammate, Eric Lamaze, solved that predicament.

“One of the major problems I have recognized with Canadian show jumping is that we need more support in order to be successful on the world stage,” said Lamaze.

“Yann is someone who didn’t currently have any top horses but has always done great things for Canada and is always there in crucial moments when the team needs him. He’s the type of rider you want to have at major games and championships. He has the mileage, dedication, and the nerves to deliver great performances. Together with Adam Pearsall, we have found a way to make our road to the Paris Olympics a little smoother,” said Lamaze.

Candele began his career as a Frenchman, but he started donning the maple leaf in 2009 after marrying Canadian horsewoman Jennifer Wallace. He went on to earn a team gold at the Pan American Games and was part of the fourth place finishing Rio Olympic team. He’s been Canadian champion four times, winning the title every year from 2010–2013.

Candele is already entered with Farezzo for the 5* in La Baule, France this week.

“When Eric met with me in Florida this winter and explained his vision for the future of Canadian show jumping, it was very exciting. It’s amazing that it’s happened so quickly, and I’m thankful for the generosity and the opportunity to be back at the highest level,” said Candele.

Lamaze isn’t done building his Canadian dream team, either. Together with Pearsall, he’s established a new foundation called the Together Group Canada, which aims to add top horses to team rider’s strings.

“The Together Group Canada foundation is on a mission to empower the Canadian Show Jumping Team by acquiring horses to support Canada on the road to the 2024 Paris Olympics. Working with Eric, we will take the Canadian team to another level in international show jumping,” said Pearsall.

While a spot at the Olympics is every team’s ultimate ambition, for Canada the 2024 Paris Games is personal.

Team Canada originally qualified for the Tokyo Games with a fourth place finish at the Lima 2019 Pan American Games, but later lost their spot on a doping violation. Nicole Walker, the team’s top placing rider in Peru, tested positive for a cocaine metabolic after drinking coca-based tea while in Peru. Walker was later cleared of wrongdoing, but the Court of Arbitration for Sports (CAS) did not reinstate her Lima results and Canada was relegated to one individual qualifying spot for Tokyo 2020.

As Canada’s most medaled Olympian, Lamaze was the leading contender, but later withdrew from consideration, citing health risks associated with his ongoing battle with brain cancer and the unappealing prospect of an individual endeavor.

“My success has been due to having my teammates there to pull together to be the best that we can be for our country. Having my owners there, my friends and fellow teammates, and all the fans is what makes the Olympics special for me. When you come into the stadium, and hear the fans screaming and see the Canadian flags waving, it raises you to another level,” said Lamaze at the time.

“As a solo act, I cannot see myself finding the motivation to dig deep enough to pull off an individual medal. I cannot be a true competitor without my team.”

Historically, Lamaze has prioritized the Canadian team over individual ventures.

As chef, his desire to win appears no less dampened. In announcing his retirement from competition earlier this year, Lamaze handed the reins of his Torrey Pine string to veteran Beth Underhill and 22-year-old 5* rookie Nina Mallevaey.

Like with Candele, Lamaze put Underhill’s new horse power into immediate action for the team. In his first bid as chef d’équipe, the Canadian team composed of Tiffany Foster, Beth Underhill, Amy Millar and Erynn Ballard rode finished runner ups to Ireland in the $150,000 CSIO4* Nations Cup at the Winter Equestrian Festival. They followed up with another second place finish as a three-person team with Tiffany Foster, Beth Underhill and Jacqueline Steffens in the Longines FEI Nations Cup™ of Mexico CSIO5* in Coapexpan, Mexico.

With renewed support on the international stage, Team Canada’s prospects look stronger than ever.

“We started rebuilding for the future with Mark and Tara Rein investing in horses, first by supporting me prior to my retirement and currently supporting Beth Underhill. Now we have Adam’s support in securing a horse for Yann. This is just the beginning of great things to come,” said Lamaze. “We will continue to adapt this model for riders who have past team experience and younger riders who don’t necessarily have the means to get the horses themselves. Working together with this support, the Canadian team will achieve its goals at future championships.”