No Team, No Olympic Dream for Canada’s Eric Lamaze 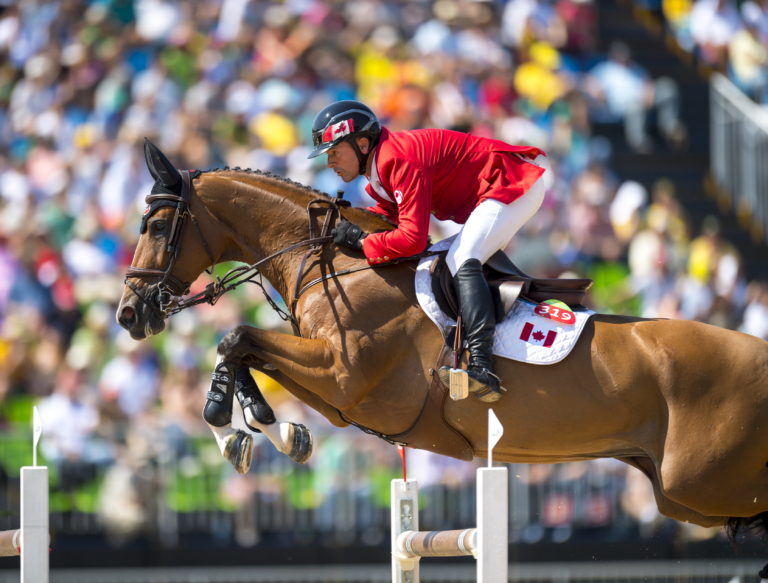 Three-time Olympic medalist Eric Lamaze (CAN) has withdrawn from consideration for the upcoming Olympic Games in Tokyo. The 2008 Beijing individual gold medalist cited health concerns and the absence of teammates in Tokyo in his decision.

Lamaze was one of five show jumping athletes named to the Canadian Olympic short list, along with Erynn Ballard, Amy Millar, Mario Deslauriers and Tiffany Foster. Currently ranked #23, he is the highest-ranked Canadian in the world standings and the most successful Canadian equestrian athlete in Olympic history. He’s also perhaps the most devoted. For the past three years, Lamaze has been undergoing treatment for a brain tumor, a condition he continues to battle, despite continuing to compete at the top level of the sport.

Tokyo’s COVID-19 interrupted games are scheduled to take place from July 23 to August 8, 2021, in Japan. The city is currently under a state of emergency due to the pandemic.

“My health is something that I take very seriously, and I’ve decided that Tokyo is not the best venue for me,” said Lamaze, 53. “While my health is stable at the moment, there are several risk factors that have to be taken into consideration.”

Canada’s solo mission in Tokyo was also a factor in his decision. The Canadians originally qualified a team for the summer Olympics with their fourth place finish at the Lima 2019 Pan American Games, but were later disqualified when team member Nicole Walker tested positive for cocaine after inadvertently drinking a coca-based tea while in Peru. The Court of Arbitration for Sport (CAS) absolved her of intentional wrongdoing but did not reinstate her results from the Lima Games. As a result, Canada is only eligible to send one show jumping athlete to Tokyo.

And that’s a prospect that doesn’t appeal to Lamaze.

“I’ve always associated the Olympics with riding for the Canadian team,” he said.

Indeed, the french Canadian has been a consistent variable in the past three Games, helping Canada to a top five team finish in each—a feat accomplished by no other nation.

At the 2008 Beijing Olympics, Lamaze made his Olympic debut aboard Hickstead, leading a Canadian team comprised of Ian Millar, Jill Henselwood and Mac Cone to the team silver medal and capturing individual gold. At London 2012, Team Canada (Lamaze, Millar, Henselwood and Tiffany Foster) delivered a fifth place finish, despite being reduced to a three member team after Foster’s mount was deemed unfit to compete. Then at the last games, Rio 2016, he, Foster, Amy Millar and Yann Candele jumped off against Germany for the team bronze medal (they ultimately placed fourth). Lamaze went on to claim the individual bronze medal with Fine Lady 5.

“My success has been due to having my teammates there to pull together to be the best that we can be for our country. Having my owners there, my friends and fellow teammates, and all the fans is what makes the Olympics special for me. When you come into the stadium, and hear the fans screaming and see the Canadian flags waving, it raises you to another level. As a solo act, I cannot see myself finding the motivation to dig deep enough to pull off an individual medal.

“I cannot be a true competitor without my team,” continued Lamaze.

The EHV-1 outbreak in Europe this spring was likely the final death knell for Lamaze’s Olympic bid. The Canadian rider is based near Brussels, Belgium. Equestrian events only now beginning to return on the European calendar.

“With all that we’ve lived through this past year, and what we are still seeing with so many people living through horrible situations both in Canada and around the world, I’m not sure I would even feel right winning a medal,” stated Lamaze. “The Olympics are a celebration of the athletes and I don’t think we’re going to have a true celebration in Tokyo.

“It’s not the time to celebrate,” concluded Lamaze.

The Canadian short list has now been reduced to four riders. But Lamaze says he still has Olympics on the brain.

“I’m also looking forward to next year’s World Championships where our team will hopefully earn its qualification for the Paris Olympics,” he said. “From there, I hope that our national federation, Equestrian Canada, will concentrate on putting together a fantastic program so our team can be at its best at the 2024 Olympic Games in Paris.”