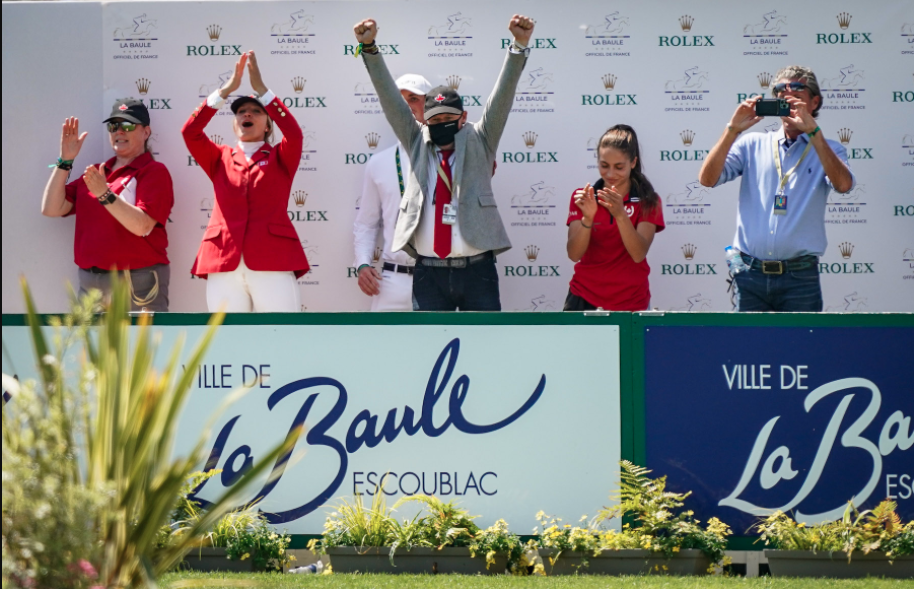 It was bronze for Canada in the €250,000 Nations Cup during the CSIO5* International Jumping La Baule in La Baule, France.

Amy Millar, Tiffany Foster, Beth Underhill and Yann Candele buttoned up their red coats once again, putting together a respectable performance which slated them third after Belgium and France. The seasoned team, fully comprised of Olympic riders, was guided by chef d’equipe Eric Lamaze for the third time.

Belgium finished on an eight-point score, and France and Canada each collected 12-points. Canada was a touch slower through the timers, which put them just behind France.

“They are all great riders and what they did today was incredible,” said Lamaze.

“It’s a new horse for Yann and it was a big ask, but they’ll be further along for the next time. Beth was nothing but class. I’m not sure I could have done any better myself. She is a world-class rider and I’m glad she had the opportunity to show her talent. All four riders are great to work with and everyone came prepared and ready to execute. We tied for second on faults at one of the best shows in the world with eight incredible teams and proved we belonged.”

Candele has been absent on the world stage for the past few years, lacking enough horsepower to put him on the world rankings. Candele was paired with top horse Farezzo just days earlier, after Lamaze campaigned to get him back on team championship level. The 12-year-old Dutch Warmblood gelding previously accrued top finishes under the Swiss flag with Edwin Smits, notably coming fourth in the CSIO5* Nations Cup Final in Barcelona.

The pair is still getting accustomed, La Baule marking their first international debut, and they collected eight-faults in the first round and 12-faults in the second. Candele served as Canada’s drop score in the final calculation.

“I’m thrilled, the horse jumped so well for me. He was spectacular. I don’t know him that well and it was my first Nations Cup with him. We’d only done a handful of classes together, but I felt very confident.  Eric knows the horse so well having ridden it himself and has helped me with that aspect of putting together a partnership. I thought he jumped even better in the second round than the first. He gave me a supreme effort,” said Underhill.

The 13-year-old Belgian Sport Horse stallion came third in the CSI5*GCT/GCL 1.60m in Doha, Al Shaqab with Lamaze in September of 2021, and sports an impressive 75% four-faults or less rate according to JumprApp.

“I’m so grateful to Eric for believing in me and thank him and the Rein family for giving me this opportunity. To be here and be riding against this type of competition brings everything up another level. It was great, and a fantastic team effort all around. There is a lot of solidarity within our team and it all bodes well for the future,” said Underhill.

Millar and Truman tallied 4-faults in the first round, but improved upon their ride to post a clear in the second round. The 13-year-old Selle Français gelding is one of Millar’s veteran partners, having placed first in the prestigious CSIO5* 1.60m at Spruce Meadows in September, collected top results at Major League Show Jumping, and rode to 3* and 4* podium finishes at the Winter Equestrian Festival this winter.

Foster and the 12-year-old bay Dutch Warmblood gelding Figor may have picked up eight faults at the double and triple combinations during their second round, but their clear first round proved instrumental in securing the podium finish for Canada.

For Lamaze, the venue in France proved to be sentimental. A three time winner of the Grand Prix of La Baule, twice with Hickstead, he is still getting used to representing Canada out of the tack.

“It was emotional to walk into the ring during the parade carrying the Canadian flag and to hear the crowd cheering for Canada and screaming my name. I wasn’t sure if I would still feel like I was a part of it if I wasn’t riding myself, but I realized today that I now have more responsibility as chef d’equipe than I ever did riding my own horse…Now I’m responsible for four people. I’m the guy in front of the orchestra now,” said Lamaze.

“What the riders did today was incredible and puts Canada back on the international scene. Team spirit has never been higher and that’s very powerful. Everyone helps each other, and they treat each other with respect. That’s what it’s supposed to be about. The story for Canada is about to change in a major way.”