All the Queen’s Horses 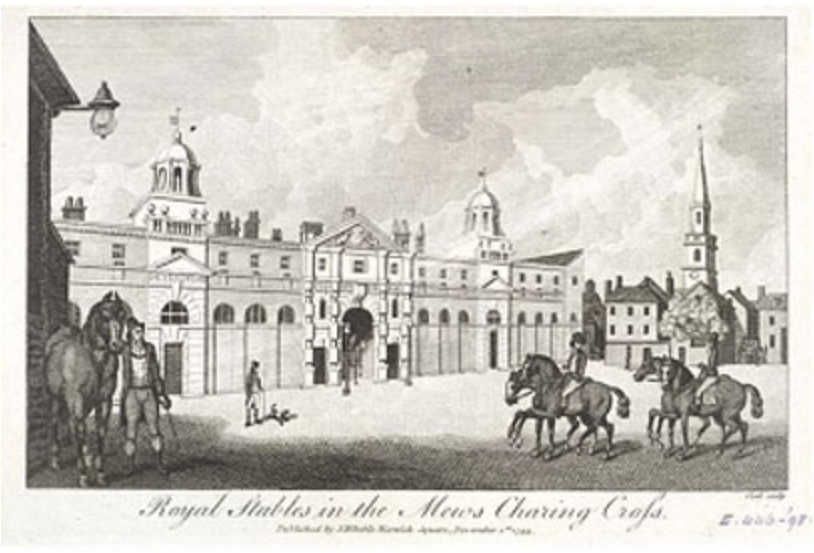 If you’ve ever been to London, you may have visited the Royal Mews, which the part of Buckingham Palace devoted to the Royal Family’s equestrian travel.

With the upcoming Royal Windsor Horse Show, it seemed like a good time to keep with the theme and explore the House of Windsor’s permanent equestrian fixture.

In my teenage years, I made my dad take me there and I most assuredly said, “Mews. That’s a weird word.” My dad, not one to miss an opportunity to impart wisdom, most certainly explained the meaning to me, and I undoubtedly ignored him. Or forgot.

So today I endeavored, once and for all, to learn why the Queen’s horses, cars and carriages live in such a place.

I first consulted my Penguin Dictionary, which said this:

Mew1: A high-pitched, plaintive sound characteristic of a cat or a gull.

Personal note: Not to be confused with a meow.

Mew2: A building or a cage used to keep trained falcons especially when they are moulting.

Mew3: To shut up or confine.

If we ignore the lamenting cry of a cat, things start to make sense.

The word mews goes back to King Richard II in the 14th century, but back then mews housed the royal hawks during their period of molting. As time marched on, and the need for royal hawks dwindled, the mews were turned into stables for horses.

Mew is derived from the Latin word mutare, which means “to change”. Mutare eventually found its way to Old French and came out as mue, which means “cage for hawks, especially when moulting”, which is, in essence, a change.

By the 15th century, it also came to mean confine or shut up.

The Royal Mews have moved around a little over the centuries. The original location was at Charing Cross but was destroyed by fire in 1534. Today, the National Gallery has taken the spot. The Mews then moved to what is better known as Trafalgar Square, before they found their final home in the early 1800s alongside Buckingham Palace, which seems like the most logical location anyway.

Today, the Mews holds not only the Queen’s horses but also the royal carriages, two Bentley State limos, two Rolls-Royce Phantom VI and a rare 1950 Rolls Royce Phantom IV. Which is exactly where I keep mine, *wink*.