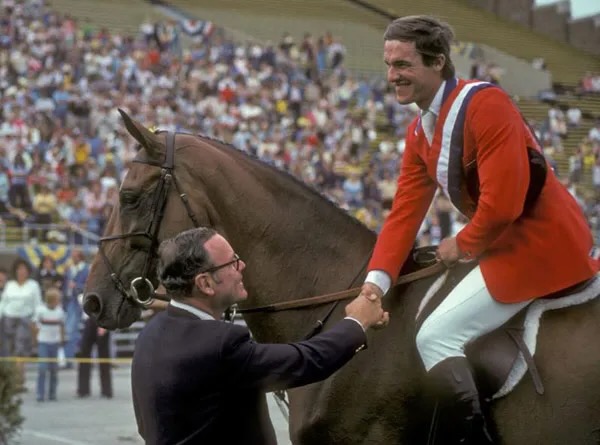 Descended from a long line of horse owners, Fitz Dixon was an avid horseman and philanthropist who left an indelible mark in equestrian sports.

A major supporter of the Devon Horse Show and United States Equestrian Team, Dixon was the owner of some of show jumping’s greatest horses.

Dixon was most identified with rider Michael Matz and the legendary show jumper, Jet Run. Dixon purchased the bay Thoroughbred from Mexico and frequently loaned him to the USET for international competition. Jet Run carried Matz to team and individual Bronze Medals at the 1978 World Championships at Aachen and to team and individual Gold Medals at the 1979 Pan American Games in San Juan, Puerto Rico. They also paired to win the 1981 FEI World Cup Final in Birmingham, England and were part of several winning U.S. Nations’ Cup teams.

At home, Jet Run carried Matz to many Grand Prix wins and was awarded the American Grandprix Association (AGA) Horse of the Year award in 1981, his fourth consecutive year finishing in the top five. Jet Run was inducted into the Show Jumping Hall of Fame in 1996.

Dixon was also the owner of Rhum IV, a Selle Francais ridden by Matz to several Grand Prix wins and who was part of the U.S.’s Silver Medal team at the 1996 Atlanta Olympic Games. Dixon was on the Board of the Devon Horse Show and was closely associated with the American Gold Cup when it was held at Devon’s show grounds. He helped raise funds to assure the future of Devon and its famed show grounds and in 1990 Devon’s main ring was renamed “The Dixon Oval” in his honor.

Throughout his life, Dixon, a member of the Jockey Club, was involved with the breeding of Thoroughbreds. Many of his horses, trained at his Pennsylvania farm, went on to great success on the track. Well known as owner or part owner of the Philadelphia 76ers, Flyers and Phillies, Dixon served as Chairman of the Pennsylvania Horse Racing Commission, National Steeplechase and Hunt Association, and Horseman’s Benevolent and Protective Association as well as organizations such as the Fairmount Park Commission, Philadelphia Art Commission and Delaware River Port Authority.

He was also devoted to his first love, education. He taught at Episcopal Academy in Philadelphia for 17 years, served on numerous school and university Boards and was the first Chairman of the Pennsylvania System of Higher Education, a position he held for 17 years.

Dixon and his wife, Edith, had two children, a son George and a daughter Ellin who made her own mark in dressage where she won the U.S. Dressage Federation (USDF) Grand Prix National Championship in 1981, and was a member of the U.S.’s 1982 World Championship team and 1987 Silver Medal Pan American Games team. She also served as USDF President.