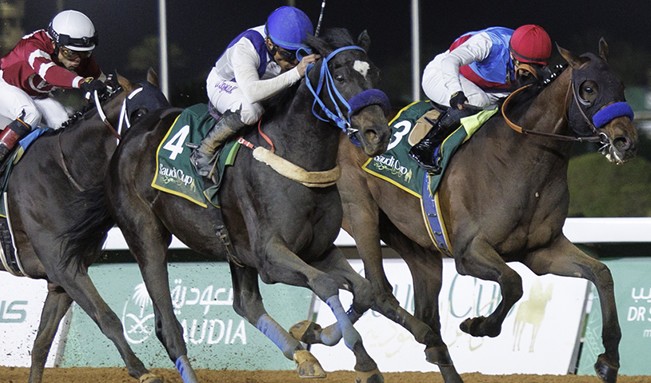 As Country Grammer entered the final 100 yards of his stretch run in Saturday’s $20 million Saudi Cup, it seemed certain the enigmatic son of Tonalist (out of Arabian Song by Forestry) was about to win the race of his lifetime.

Enigmatic because he had done little on the racetrack after winning the Peter Pan Stakes (G3) at three and the Hollywood Gold Cup Stakes (G1) at four to bring his career record to a middling 3-1-1 after nine starts, banking a mere $377,320.

Purchased by WinStar Farm for $110,000 at the Jan. 2021 Keeneland sale and co-owned by Zedan Racing Stable, he was turned over to Bob Baffert for training.

The preparation showed as the horses turned for home.

The five-year-old had just put away highly regarded Midnight Bourbon in the stretch. Last year’s Saudi Cup winner Mishriff burned out early, clocking 42.3 mph just two furlongs into the race. He would finish last. Mandaloun, handed the 2021 Kentucky Derby crown after Medina Spirit was deemed disqualified for a substance violation a few days before, never showed up and would finish just ahead of Mishriff.

“I thought I had the race won,” Country Grammer’s pilot, Flavien Prat, would say later.

As the final yards evaporated in the warm Saudi evening, the hometown crowd began letting out a huge roar encouraging on a hometown favorite all the wiseguy handicappers thought should not even have been in the race.

Emblem Road left the gate slowly as a 80-1 moonshot. The disrespect for the Kentucky-bred son of Quality Road perhaps came from the fact that his stellar 7-1-1 record in 10 starts to this point all came at home in Riyadh on King Abdulaziz Racetrack. Locally trained by Mitab Almulawah, he was thought to be racing out of his class.

But familiarity with the deep, dusty dirt of the track combined with his sire’s tactical speed—Quality Road holds the six furlong track record at Saratoga—should have earned a second look.

As Country Grammer and Midnight Bourbon dueled, Emblem Road, saved throughout the race by jockey Wigberto “Wiggy” Ramos, charged ahead clear on the outside. He snared the leaders in the final 50 yards and held on for a half-length victory in what was one of the greatest upsets in a major G1 race in the past quarter century.

The veteran Panamanian has raced the past 24 years in Saudi Arabia. He recalls telling owner Prince Saud Bib Salman Abdulaziz the only way he felt he could win was to run off the anticipated speedy pace.

“I said in the lead-up to the race that I believed my horse could finish in the first three,” said a confident Ramos. “I said I would take my time. When I saw my horse in the parade ring I knew he could run a very big race. So he went around horses [in the stretch] and was clear.

“When I pulled him up and realized what I had done, I was close to crying. I’m 53 years old now and this is the best thing that has happened to me in my career.”

Ramos’ familiarity with the dirt surface at King Abdulaziz Racetrack proved to be a critical advantage.

“The key on this track is to be near the front when you pass 800 meters,” he explained. “If you’re near, you’re in a good position. And outside is the best part of the track.”

As big an achievement as this is to his and his horse’s fans in Saudi, the unexpected victory did not go unnoticed in his native Panama. “The vice-president of Panama sent me a message on my Instagram. That feels good.”

Emblem Road is a grandson of 2006 Preakness (G1) winner Bernardini. The latest Saudi Cup winner is out of the Bernardini broodmare Venturini, only a two-time starter for Juddmonte before beginning her broodmare career.

Saudi Cup runner-up Country Grammer will go away disappointed but with a full saddlebag, earning $3.5 million. Even finishers through tenth place earned a $200,000 piece of the largest single-race purse in the world.

Country Grammer will stay in the neighborhood to contest the Mar. 26 $12 million Dubai World Cup. It is expected that Mandaloun and Midnight Bourbon will also contest that race. It was announced earlier this week that Todd Pletcher-trained Life Is Good will journey to Dubai. Fan favorite Hot Rod Charlie has been stabled there since January where he won his World Cup prep race.

It was announced after the race that Mishriff will head home for a full examination though no injury is suspected.

No immediate plans were suggested for Emblem Road, though it is now possible he too may journey to Dubai.

As for jockey Ramos, he claims post-race to “have been chillin’ with the Saudi people, people from America, people from all over the world.”

It surely will be pretty cool for Ramos to figure out how to spend that $1 million winning jockey’s purse.