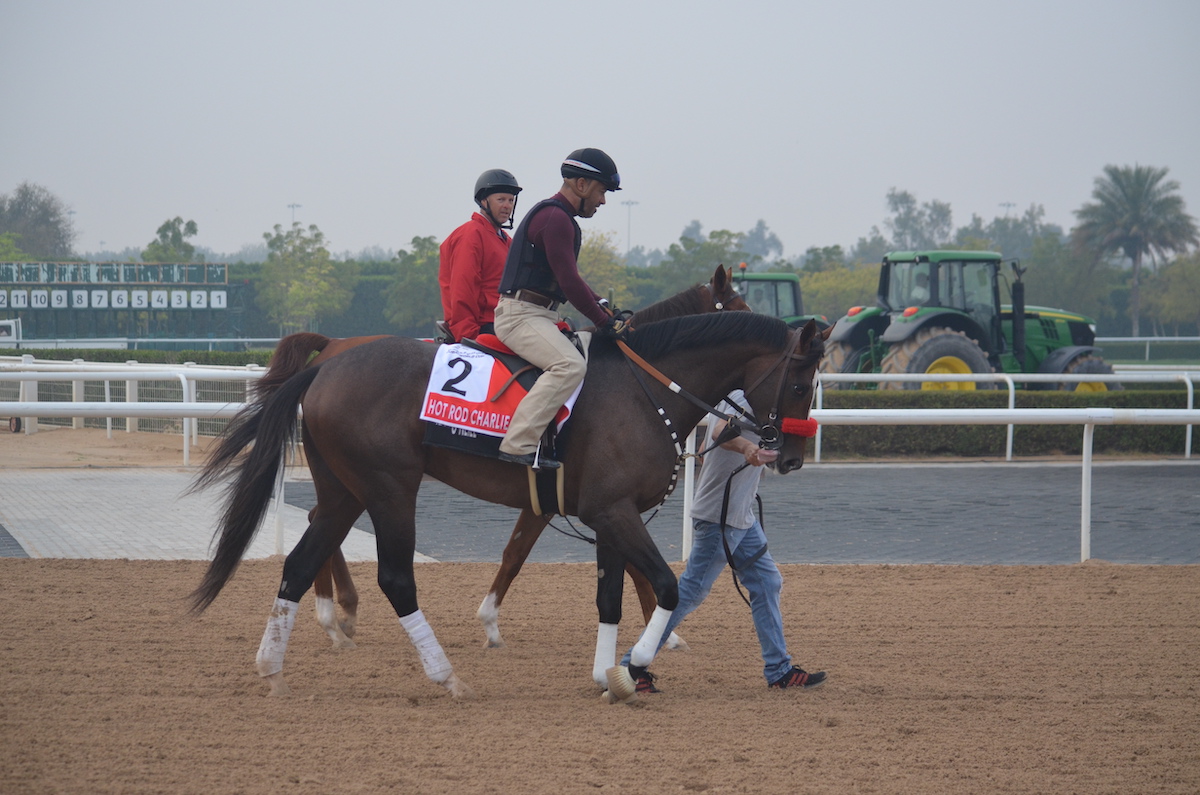 There is perhaps nothing more mythically American than the up-by-the-bootstraps working class striver whose path to success involves fulfilling one’s dream through hard work, persistence and a little luck.

That same description could be applied to describe Hot Rod Charlie, the horse who has captured the imagination—and the hearts—of both casual and serious racing fans in the same way as the legendary Seabiscuit.

On Saturday, over 8,000 miles away from America at Meydan Racecourse in Dubai, Charlie will likely put on his usual display of hard work and persistence, while hoping for a little luck, when he leaves post #7 seeking to fulfill his owners’ dream of becoming the 26th winner of the $12 million Dubai World Cup.

“I think he’s kind of a blue-collar horse,” suggests John Foster in describing why Hot Rod Charlie has captured the imagination of American—now international—racing fans. Foster, along with wife Joan and Greg and Glenna Helm, are four of Charlie’s 12 owners in Dubai to cheer on their plucky find.

“He was a son of [2013 Preakness winner] Oxbow, which no one wanted, and people thought he wasn’t any good. He’s kind of a blue-collar guy; he’s got a blue-collar name. So, he’s not very sophisticated.”

How six couples, most with little knowledge of racing, acquired Hot Rod Charlie is itself the stuff of myth with a dash of luck for the majority owners that go by the name Roadrunner Racing.

The group were members of the same Southern California social club. They pooled resources and purchased their first horse, one lost in an accident. Still wanting to remain in the sport, they got that mythical life-changing phone call.

“We got a call one day from Dennis O’Neill [brother of trainer Doug O’Neill],” recalls Foster. “I’ve got a yearling down here you need to buy. We had lost a horse. We probably wouldn’t have bought [Charlie] if we hadn’t lost that horse.”

Still, though not very sophisticated, there is a bit of blue-blood coursing through Hot Rod Charlie’s veins.

“He sold us very easily because he was a half-brother on his dam’s side [Indian Summer] to Mitole. That sounds like a good name.”

It is. Mitole was the 2019 Eclipse Champion Sprinter. The son of Eskendereya left racing with a sparkling 14:10-2-2 record. He retired to stud at Spendthrift Farm in 2020 where his fee was pegged at a seemingly low $15,000, likely because his record came mostly at six furlongs, never more than eight. Serious fees are usually reserved for Champions at the classic 10-furlong distance.

Speaking of names, Hot Rod Charlie is probably the reigning favorite in racing. But that wasn’t supposed to be his name.

“Our first choice was Charley Horse,” says Foster. But Jockey Club rules prohibit use of the word horse in a horse’s name.

“Hot Rod Charlie was our second choice…arrived one night after too many Pinot Noirs and listening to rock ‘n Roll music,” chuckles Foster.

Unlike his sire, Hot Rod Charlie was groomed at two by trainer O’Neill in hopes of running a classic three-year-old campaign that would lead to a Kentucky Derby (G1) gate. It would, but that would take a while.

“From day one, we really liked the horse,” says Foster, “but we had no idea what he was going to do because he didn’t start out that strong.

“Leandro [Mora, assistant trainer to O’Neill] kept saying how scrawny he was. He just wasn’t filled out. But he grew. Once he learned how to win, it was a whole different game.”

Charlie began to show promise by finishing second in the 8 1/2-furlong 2020 Breeders’ Cup Juvenile at Keeneland. As a three-year-old last year, that promise flowered in the Pennsylvania Derby (G1) and the Louisiana Derby (G2), both over nine furlongs.

As successful and popular as he has become, the 2021 Vox Populi winner has come to be thought of as a smaller horse with a big heart who gives his all and comes up just short.

The race that could be tagged his signature three-year-old contest was the Belmont Stakes (G1). He set a furious pace in the 1 1/2-mile “Test of Champions” only to be run down in a breathtaking stretch duel by Godolphin’s 2021 Eclipse Award Three-Year-Old Champion Essential Quality. His game effort won Charlie a legion of fans.

He finished off his 2021 campaign with a fourth-place finish in the Breeders’ Cup Classic (G1) back home at Del Mar.

With Essential Quality surprisingly retired, Mandaloun now a puzzle and Medina Spirit having tragically passed from a likely heart attack following a routine training run at Santa Anita, it was perhaps opportune that his owners would choose to have Hot Rod Charlie race as a four-year-old.

To plan his 2022 campaign, Charlie’s connections turned the calendar back to a time when Meydan Racecourse did not exist, to Dubai’s first racecourse, Nad Al Sheba.

Hall of Fame Champion Curlin is one of the greatest horses in recent memory. As a raw three-year-old in 2007, he would win the Arkansas Derby (G2) and the Rebel Stakes (G3) before a disappointing third-place finish in that year’s Kentucky Derby and a loss to filly Rags To Riches by less than a head in a memorable Belmont. He would finish that year with wins in the Haskell (G1) and the Breeders’ Cup Classic, both at Monmouth.

Thought to have more greatness ahead, he was tapped to race as a four-year-old in 2008. Curlin would win the Stephen Foster (G1) at Churchill Downs, the Woodward Stakes (G1) at Saratoga, and the Jockey Club Gold Cup (G1) at Belmont.

Curlin even moved to turf and finished second to Champion turf horse Red Rocks in the Man O’ War Stakes (G1) at Belmont as connections considered a trip to Paris for that October’s Prix de l’Arc de Paris.

But that year began with a plan forged by trainer Steve Asmussen and Curlin’s connections to train up to the Dubai World Cup (G1), then the world’s richest race with a $6 million purse. He shipped in January to Dubai.

He ran and easily won the Jaguar Stakes in February as his prep for the World Cup. Well-acclimated, trained and prepped in now-familiar surroundings, Curlin won that year’s Dubai World Cup by a record 7 1/2 lengths.

“We researched the past Dubai World Cup winners,” explains Mora, in Dubai with Charlie. “We saw how Curlin was prepared for this race and decided to follow the same plan.”

That same plan will be challenged by the strongest American contingent ever to enter the gates in this race and a field of 11 that make this one of the most highly competitive World Cups ever. Many of Charlie’s fans were at the Dubai Opera House Tuesday night and let out a familiar roar of approval when their hero drew post #7.

Every hero needs a villain. If Charlie is Luke Skywalker, then Darth Vader surely is Life Is Good. The Todd Pletcher-trained Pegasus winner is thought to be the best American horse currently in training and is the clear favorite.

The only blemish on the Into Mischief colt’s 7:6-1-0 record is a second-place finish in the H. Allen Jerkens Memorial Stakes (G1) at Saratoga. He was saddled in that race by Steve Asmussen who took over the task when owners China Horse Club and WinStar Farm chose to move the horse from the Bob Baffert barn following that trainer’s two-year suspension at Churchill Downs.

Moved to the Pletcher barn after that runner-up finish, Life Is Good has looked very good indeed, winning the Kelso (G2) at Belmont, the Breeders’ Cup Dirt Mile (G1) at Del Mar and the Jan. 29 Pegasus at Florida’s Gulfstream.

Life Is Good is not the only challenge. Baffert-trained Country Grammer arrived from nearby Riyadh after his second-place finish in February’s $20 million Saudi Cup. Third-place finisher in that race, Midnight Bourbon, will also contest as will last year’s World Cup runner-up, Japan’s Chuwa Wizard.

Still, the Hot Rod Charlie team is confident. Mora and the owners present each morning during trackwork have been all smiles.

“He travelled well, he’s been training well, he’s happy,” assesses Mora. And reigning Eclipse Award-winning jockey Flavien Prat will be at the controls.

Like many Into Mischief runners, Life Is Good is a speed horse, though he can break a little slowly from the gate. An early challenge by Country Grammer or speedy Hypothetical outside could allow Hot Rod Charlie to find a comfortable position off the pace.

Too, this is the first time Life Is Good will race the 1 1/4-mile distance. With luck and a good trip, Charlie could have plenty left later in the race.

“When Life Is Good jumps, Country Grammer might jump also,” suggests Mora. “So, [Charlie] is going to have to run a little faster to be with those two. That’s what I’m thinking. We’ll see at the break. There’s a lot of commotion in these types of races. Hot Rod Charlie is a smart horse. When that commotion happens and he’s focused, he’s going to be fine.”

Oh, and one other thing for all you Charliemaniacs. Just before the start of the Breeders’ Cup Classic at Del Mar, a hundred or so fans gathered by the rail, chanting in unison “Let’s go, Chuck!”

Co-owner Joan Foster would like to remind all his fans: “It’s ‘Charlie,’ not ‘Chuck’!”