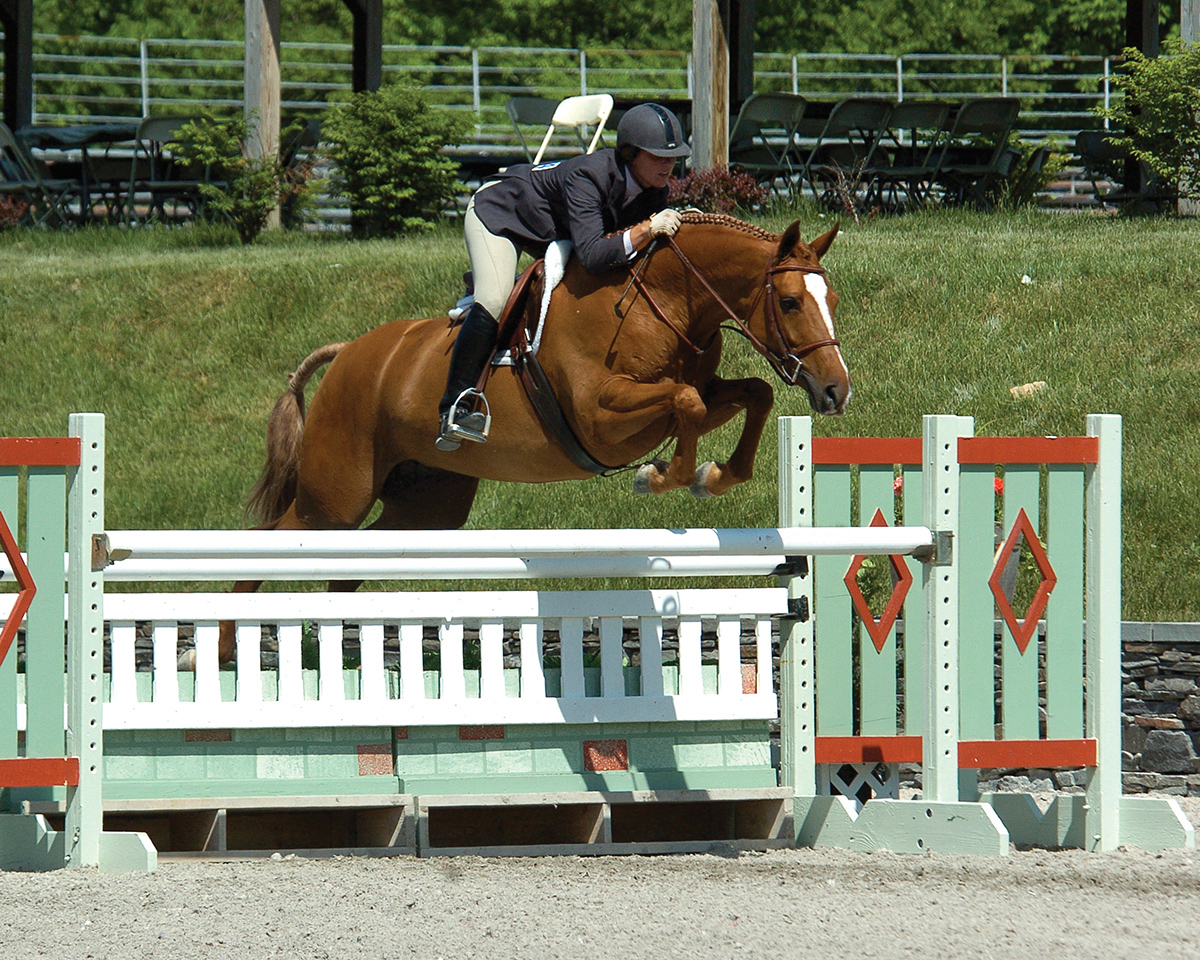 Anyone who has ridden in the hunters has wondered at one time or another why one horse pinned higher or what mistake might have kept them out of the ribbons altogether. In her renowned reference book Judging Hunters & Hunter Seat Equitation, former Maclay winner and “R” judge Anna Jane White-Mullin gives us a quick reference to how decisions are made.

Another drastic alternative is “diving”: the horse stretches his front legs so far forward in an effort to clear the rails that he appears to be diving toward the ground. Any of these desperate actions should keep a horse out of the ribbons unless the class is so small or the trips so bad that you have no other choice.

“Reaching” and “cutting down” are less dangerous methods of dealing with a risky spot, but are still major faults.

In “reaching,” a mild form of diving, the horse tries to clear the obstacle by stretching his front legs forward—beyond their normal position in the air.

Unless the horse that cuts down also carries a rail to the ground with his hind feet, you should penalize this fault less severely than reaching. The reasoning is that in reaching, the horse risks catching his front limbs on the obstacle and possibly flipping over in the air. In cutting down, the horse risks catching his hind limbs on the obstacle—a fault that has much less potential danger for the rider and horse. (As a rule, front-end errors are more heavily penalized than hind-end errors.)

When a horse leaves the ground from a spot too close to the fence—whether the rider has placed him there or the horse happened to meet that spot through lack of rider assistance—the animal should compensate for the deep spot by bringing his hocks well under his body on the takeoff stride and rocking backward slightly more than he would for a medium spot, so that his legs will be away from the rails. A talented, athletic horse will get his rider out of trouble this way, but a lazy or untalented one will hit the top of the fence with his front feet.

Even worse than the horse that doesn’t mind touching the fence is the one that hangs his legs down toward the fence when placed at a deep spot. Not only is hanging visually unattractive, but it should be penalized severely for safety reasons: a horse that hangs his front legs could catch one or both of his forelimbs on the top of the obstacle and have a serious accident. Front and hind legs should be neatly tucked while jumping so there is no danger of the animal entangling himself in the rails. You should penalize a horse that hangs even if he doesn’t touch the rails, for the Rule Book directs that “Judges must penalize unsafe jumping and bad form over fences, whether touched or untouched.”

In judging only these horses that have taken off from deep spots, place third the horse that is lazy with his legs and hangs. Pin second the horse that remains in good form but has a front-end touch, and place first the horse that rocks back at takeoff and copes with his placement in an athletic manner.

Another form fault you may see when a horse meets a fence from a spot too deep is “propping.” A horse that props appears to be pushing back from the fence during the approach to the obstacle and at takeoff in an effort to get his front legs away from the rails. When a rider attempts to drive a horse past a reasonable takeoff spot, the horse may prop to set himself up to jump in good form despite the rider’s signals. Propping may also be caused by a weak rider who allows the horse to slow down at every fence, so the animal becomes accustomed to making the smallest effort possible to get over the fences.

In its slightest form, propping is not heavily penalized, for it is not a dangerous fault but only an interruption in the horse’s forward flow of energy at takeoff. However, if the horse chronically props, as in the case of the weak rider who lets the horse prop at every fence, the penalty should be great, for chronic propping is a manifestation of the horse’s general unwillingness to go forward.

You may see other form faults while a horse is airborne, such as a horse that “lies on his side” by tilting in midair so that one of his sides is inclined toward the ground and the other toward the sky. Penalize this fault severely, since it shows a marked lack of balance and can be quite dangerous: if the rider’s weight shifts radically toward the down side, the horse may be unable to land on his feet.

Less serious than inclining to one side is “twisting” over a fence, in which the horse remains upright in the air, but writhes during his flight path in order to let the front and hind limbs clear the fence. A horse may twist for one of several reasons: an overfaced animal may be struggling to clear the fences; a horse with a physical disorder, such as a navicular or a back problem, may be incapable of a straight jumping effort; or a lazy horse placed at a deep spot may twist instead of rocking back on his hocks to clear an obstacle. Whatever its cause, twisting receives a severe penalty.

Hanging, diving, reaching, cutting down, lying on the side, and twisting are serious enough to keep a horse out of the ribbons.

This excerpt from Judging Hunters and Hunter Seat Equitation by Anna Jane White-Mullin is reprinted with permission from Trafalgar Square Books (www.horseandriderbooks.com).