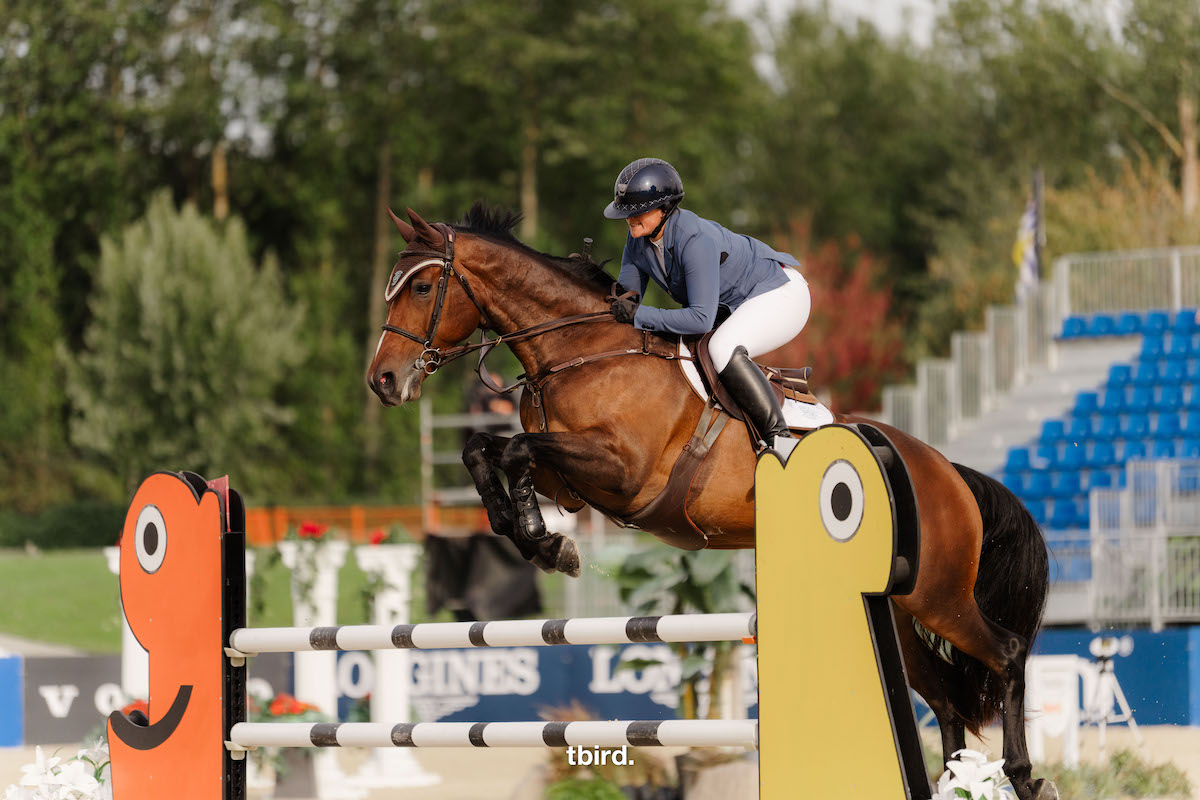 Kassidy Keith (CAN) was just 18 years old when she met a four-year-old Havana.

The Dutch Warmblood mare by Cardento, from the dam line of Beezie Madden’s (USA) Judgement, Havana was originally purchased by Gareth Graves (CAN) as a two-year-old out of the Canadian Warmblood Fall Classic Sale before joining Keith and her mother’s Langley Township-based Keepsake Farms.

The two have been inseparable ever since.

“We’ve developed our partnership from the time I showed her at three-foot to now stepping up to the [international level],” Keith said. “She’s a real pleasure to work with. She always tries her heart out in the ring, and I love her.”

The recently crowned MarBill Hill U25 League series champions, Keith and Havana have caught the eyes of many—Havana’s exuberant, lofty jump and Keith’s poise reflect that of a professional team far beyond their years. On Friday at Thunderbird Show Park, the pair—now 23 and nine, respectively—won the first ranking class of their respective careers in Friday’s $36,900 CSI2* tbird 1.45m.

“This is by far the biggest win of my career,” Keith said. “It’s very special to have developed Havana to where she is now. She just keeps showing me that she can be better and better. I can’t wait for the things to come.”

Keith has had to be patient, but a decision when Havana was six years old has undoubtedly shaped this pair’s path. She bred her mare to the Hanoverian stallion Sir Shutterfly, a full brother to Meredith Michaels-Beerbaum’s legendary Shutterfly. While Keith had originally planned for the pregnancy to be carried out via embryo transfer, while competing at tbird, she called an audible.

“It just so happened that the embryo either had to come out during the show, or she would just stay pregnant,” she explained. “She was jumping really, really well at the 1.25m and 1.30m. I actually won the first class [of our division] out on the field, and I said to my mom, ‘We don’t need to pressure her to jump bigger,’ so she can have the baby.”

Keith rode Havana as late as she safely could through the mare’s pregnancy, and after the foal—named “Sabrina”—was born, the pair resumed work. When Sabrina was young, she joined Keith and Havana for rides. Now, Sabrina has gone for a few rides of her own.

“Sabrina is super curious. She thinks I’m her mom, because she runs across the field when I go and see her,” Keith said. “She’s got Judgment’s exact markings, but the opposite way; it’s just flipped. Her sire is Sir Shutterfly, so she’s quite big. I’ve already sat on her over the winter. We worked with her for three weeks, and then we put her back in the field. She’s just a pleasure to have around.”

Patience has been the key to Havana’s success, and even as the mare has stepped up with success, due to her hard, high jump, Keith repeatedly moves up and down the levels to make sure her mount remains confident. After debuting at the CSI3* level at tbird’s Summer Fort Festival in August, the pair returned to the U25 level to win the $25,000 CSIU25-A MarBill Hill U25 League Final before stepping back up to senior FEI competition. The duo won right off the bat again Friday, topping an eight-horse jump-off that included Conor Swail (IRL) and Vital Chance de la Roque, winners of the previous week’s $150,000 CSI4*-W Longines FEI Jumping World Cup™ Vancouver.

“I just started stepping [Havana] up a little bit. We’ll step her up and then back off a little bit,” Keith said. “She’s always giving me her best. We had a really good round on Sunday [in the $25,000 CSIU25-A MarBill Hill U25 League Final]. She was a little bit impressed [in the first round of the $36,900 CSI2* tbird 1.45m], because it was her first time in the ring this week. But she went into the jump-off, and she was relaxed and happy and forward. When she’s relaxed, she’s naturally fast.”

Working alongside her mother Cheryl at the locally based Keepsake Farms, while also receiving guidance from fellow Canadian show jumper Darrin Dlin, Keith is always moving, whether she’s coaching a student, schooling a horse, or competing in the ring herself. But she always makes extra time for Havana.

“I take care of her most of the time,” Keith said. “The girls at my barn help a little and bring her to the ring and kind of take care of her when I have to coach, but our bond is really special. She’s got a huge personality and she definitely is an opinionated mare. She tells me what she wants to do! She has a heart of gold.

“To have a young horse to develop into [this] and I’ve done it on my own, with the help of my mom and some pretty awesome people, it [makes] me really happy.”