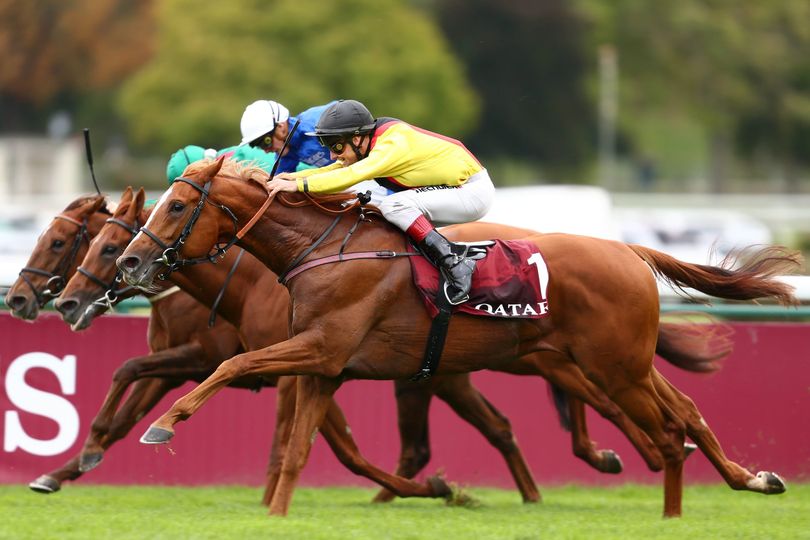 Climate change has introduced the phrase “100-year storm” to describe an event that occurs just once in a century. What happened Sunday in the centenary running of the Prix de l’Arc de Triomphe at Paris Longchamp was just such a rare event.

Torquator Tasso, a little-known four-year-old purchased for $26,000 as a yearling at Germany’s October sale left from the rail post on soft ground at 70-1 odds, then shocked the racing world with a quick-closing victory over 2020 Breeders’ Cup Turf Champion Tarnawa and Godolphin’s Hurricane Lane in one of the most thrilling—and unlikely—results against one of the deepest fields in the recent history of Europe’s most prestigious turf race.

Even more unlikely? The horse arrived only on Saturday. He was ridden by 34-year-old jockey Rene Piechulek and saddled by second-year trainer Marcel Weiss, both competing in their first Arc.

“I am lost for words. We would have been very happy if he had finished third, fourth, fifth or even sixth,” explained the clearly surprised trainer of the unanticipated result. “Winning was a bonus.”

“To win the best race in the world is absolutely incredible…we are so lucky,” said co-owner Peter Michael Endras.

Godolphin’s Adayar went off as co-favorite with Tarnawa. The regally bred Epsom Derby and King George VI and Elizabeth Stakes winner (out of Anna Salai by Dubawi) swiftly took the lead and held that advantage throughout the race. But the notoriously quixotic Parisian autumn had rainfall through the preceding two days. The resulting soft turf left the three-year-old Irish son of Frankel short on stamina. He would fade to a fourth-place finish.

Japanese challenger Chrono Genesis was thought to be among the “smart” choices, but remained far outside throughout and never became a factor in the race. The same was also thought of Snowfall, also running for Japan and trainer Aidan O’Brien. Trapped in mid-pack throughout, the three-year-old daughter of Deep Impact could only manage sixth.

For O’Brien, it was another Arc disappointment. Well-regarded Love was scratched from the field after spiking a fever following a morning training run earlier in the week. O’Brien withdrew Love from last year’s Arc contest because of the soggy ground. His stable’s horses from other Arc-day races all were withdrawn last year “in the best interests of racing” after feed contamination that could have affected their drug tests.

With 200 meters left, Adayar opened up a two-length lead. But the early speed and softer ground on the inside of the soggy 1 1/2-mile Paris Longchamp course took their eventual toll. He swiftly faded in the final 100 meters.

During most of the contest, the eventual three top finishers ran directly abreast of each other in the middle of a tightly packed 14-horse field. As remaining challengers faded, Hurricane Lane and Tarnawa both found openings that seemed to set up a two-horse finish in the final 50 meters.

First-time Arc rider Piechulek had picked up the ride on Torquator Tasso early this summer. Racing further north in Germany, the horse was thought to favor softer wetter ground though, as the odds suggest, few predicted a serious opportunity for the win.

Despite leaving from the unfavorable one post, Piechulek quickly moved his ride further outside early in the race where the turf was soft but not as deep as it was closer to the rail.

The strategy worked. As Tarnawa and Hurricane Lane alternately poked noses ahead of each other in the closing quarter furlong, Torquator Tasso stormed in front on their outside yards before the finish to snare the win by a near-length.

I wanted to be quite close to the pace,” explained Piechulek of the strategy. “Torquator Tasso has a superb power of acceleration and he showed that at the end.

“It won’t sink in until tomorrow that I’ve won!” exclaimed the winning rider.

It was the fourth win in 10 starts for the son of Adlerflug (out of Tijuana by Toylsome), the third in his last four races, and his first time racing outside Germany. It was only the third victory for a German-bred horse in Arc history.

At eventual post-time odds of 72-1, Torquator’s win rewarded the minimum $2 win bettor $145. Though long, the winner’s odds were not the longest in Arc history: fellow German runner Star Appeal won the 1975 Arc at 119-1.

The third German runner to score an Arc victory was Danedream in 1975 then-record-setting time (2:24.49) for the 2400 meters. The current record (2:23.61) was established by Found when the 2016 Arc was run at Chantilly while Longchamp was undergoing renovations.

Torquator Tasso became eligible for the Arc following a win in the Grosser Preis von Baden (Ger-G1), the same race that set up Danedream for victory in the Arc.

The Arc rewards the winner with an all-expense-paid “Win and You’re In” trip to the Breeders’ Cup Turf, this year run at Del Mar Nov. 6. But trainer Weiss said in the post-race press conference he would skip the Breeders’ Cup because of a too-quick turnaround.

Only Enable in 2018 successfully scored triumphs in both the Arc and the subsequent Breeders’ Cup Turf, that year run at Churchill Downs.

The Nov. 28 Japan Cup (JPN-G1) and the Dec. 12 Hong Kong Cup (HK-G1), both on turf, remain possibilities. The trainer hinted at Japan in his post-race comments, though the Hong Kong Cup would seem more favorable. Like most European turf races, Hong Kong contests are run right-handed and would allow more prep time. The longer 2400-meter Hong Kong Vase (HK-1), also on Dec. 12, is another possibility.