So You Want to Be a Mustang Trainer? Here’s What You Need to Know

Home > Blog > Sponsored > So You Want to Be a Mustang Trainer? Here’s What You Need to Know 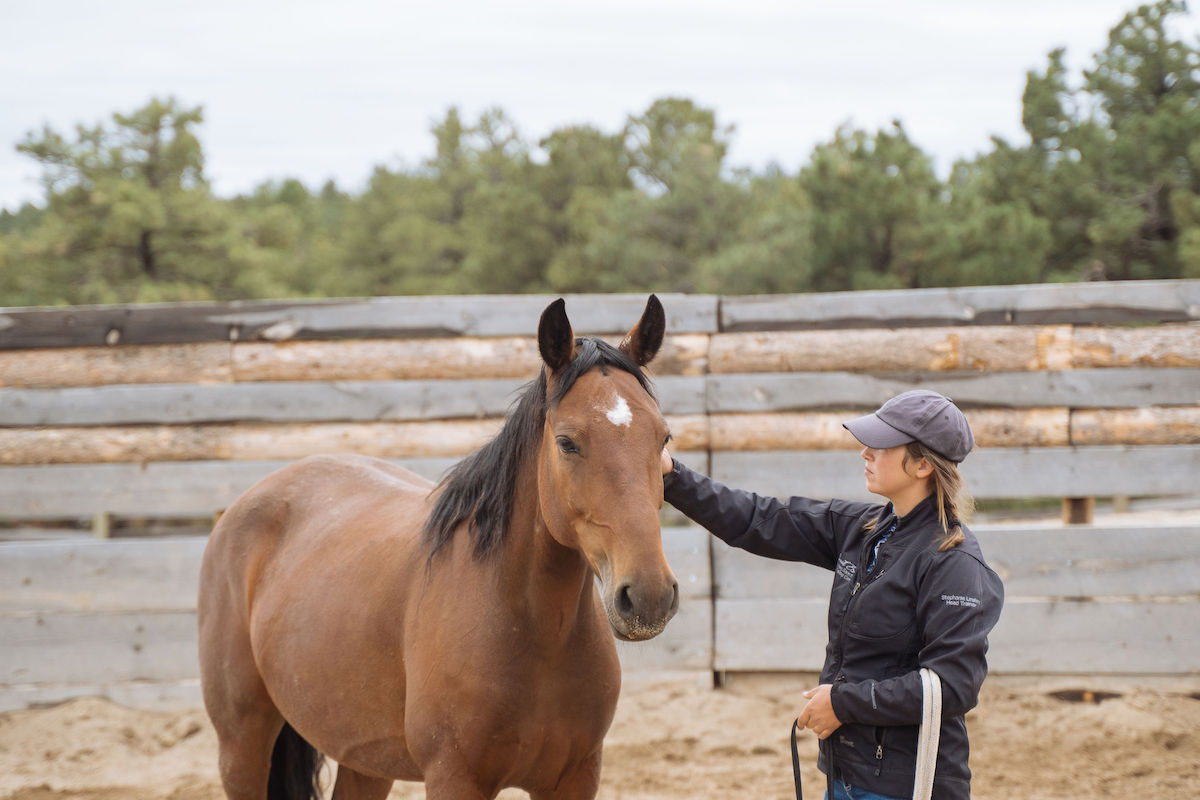 When Babbie Styslinger arrives at her 56-acre farm in the town of Leeds, near Birmingham, Alabama, her presence rarely goes unnoticed.

Sure, Babbie’s training partner Brandy Jewell Dempsey generally has some work matters to discuss with her; plans for the week and updates on the wild horses in their care. But it’s Babbie’s five-year-old mustang Ace that usually notes her arrival first—and insists on having the first word.

“Ace knows my car, he knows the sound of my voice,” Babbie explains. “He got out of his corral the other day. He heard my voice and he started using his teeth and fiddling with the gate, and [he just let himself out], and came walking up to the barn to see me.”

Ace is one of more than 120 mustangs that Babbie and Brandy have helped to retrain and, in most cases, move on to new adoptive homes as part of the Mustang Heritage Foundation’s Trainer Incentive Program (TIP). As approved TIP trainers, Babbie and Brandy gentle and halter-train tens of Bureau of Land Management (BLM)-branded wild horses every year. When they’ve met all TIP training requirements, the women market and rehome them, receiving $1,000 in compensation (or $750 for burros) from the Mustang Heritage Foundation for every horse placed.

“We don’t do this for the money,” says Babbie, who also owns two home design and furnishings-related businesses in Birmingham. After earning her equestrian degree in West Virginia, Styslinger got her start in the industry working as a broodmare manager before taking a job with a well-known cutting horse trainer.

She sat on her first mustang while volunteering at a horse rescue in Kansas City. Years later, she found herself agreeing to pick up a load of “scraggly, long-haired” mustang yearlings—and what turned out to be a couple of stray ranch horses—from the Navajo reservation in New Mexico. She’s been hooked ever since.

“The lure of the mustang is that you really are kind of saving something, and also the connection and loyalty they have to their owners,” Babbie says. “The people that get them, [most of them] never go back to domestic horses.

“Mustangs are family-oriented, and in many cases, they’ve been separated from their [own] families, so they are looking for that connection with their new owner.”

As established TIP trainers, the BLM allows Babbie and Brandy to work with up to 10 horses apiece at any one time. When a horse arrives at their facility, they have between 10 and 90 days to gentle that mustang for adoption, using a combination of round pen and liberty work, ponying from their own horses, and employing a special arsenal of mustang training tools. These include a false “arm extension” to teach the horses to tolerate human hands; a wide range of tarps, sacks, baby pools, and toys; and cavaletti and pedestals.

On the minimum requirements to-do list for each mustang before it can be adopted: learning to lead, load in a trailer, tolerate human contact for grooming, and pick up all four feet. Some mustangs rise to the challenge in just a couple of days, while other, more complicated individuals need to remain in training at the farm for months at a time.

“You’re looking for that connection, and getting them to follow your lead,” Babbie explains, noting that her ideal mustang has a laid-back, willing, and intelligent temperament, and is also motivated to seek out human contact.

For some horses, however, that can be a big ask. In those cases, Babbie says, something as simple as deciding to turn toward instead of away from her in the round pen, or allowing her to touch a shoulder for the first time can feel like a major victory.

The most gratifying part of the process? Sending her graduates off to their new homes, where she can watch them continue to develop while often changing their owners’ lives in the process.

“I know the impact and the emotions [involved] when you get a little girl a horse, and it really does change everything,” explains Babbie, a self-described ‘wild-child’ in high school who says that horses brought a sense of purpose and discipline to her own life at times when she needed it the most. She and Brandy are paying that gift back three-fold, and in the last few years, they’ve sent their TIP graduates on to homes as far away as Michigan, Pennsylvania, and Texas, and into future careers as both English and western riding horses, as well as companion animals.

Being “extremely picky” about correctly placing their horses with the right adopter is essential, Babbie says, and she encourages prospective owners to not only visit the farm and meet their horses in person, but to continue to reach out with questions or concerns when they get home.

Among her favorite success stories: a mustang named Rio who prefers people to other horses and was promptly snatched up by his new owner’s boyfriend after he discovered the in-your-pocket gelding’s love of giving kisses.

“He wasn’t that different from other mustangs when he came to us, but he was really different [by the end of his training],” Babbie explains. “It’s like his personality came out. I never cried so hard when a horse left.”

Then there was the two-year-old gelding, Ruger, a Sulphur Springs mustang from Western Utah. “Sulphurs are known for striking things, and he was a big boy. It took us eight days for him to get over striking at any object that he didn’t particularly like,” recalls Babbie, adding that the gelding went to live with a gentleman in Texas who’d always wanted to own mustangs. He adopted his second, Ruger, at the age of 68.

“He called me not long ago and said that [Ruger] is the love of his life, and everything he’s ever wanted,” Babbie says. “He has felt a bond with him that’s unlike anything he’s ever felt with another horse.

“When you hear those kinds of things, and people thank you, and continue to send you pictures after [they’ve had their mustangs] for more than a year, then you know you’ve made a difference.”

As with all equine endeavors, being a TIP trainer isn’t all happy endings and made-for-TV success stories. Babbie says the costs for maintaining her facility are high, and while we all know that horses, in general, can be fragile animals, mustangs are no exception.

Since opening up shop, Babbie and Brandy have lost horses to a broken shoulder injury, a vision problem and an undetected navicular bone break that only showed up when weight was applied to the horse after being saddled. Both women have been on the receiving ends of various kicks and blows.

More than that, Babbie says, the placement process comes with its own challenges. Saying goodbye to a wild horse you’ve spent so many formative hours creating a bond of trust with is never easy, even when a horse is going to the ideal adoptive home. Babbie laments the favorite horses she’s lost track of over the years. She also worries when a small group of her clients fall down on their obligation to continue their mustang’s training and maintain the hard-won skills they learned on her farm.

And while Facebook has proved to be an invaluable tool for marketing her TIP mustangs, Babbie says mustang “help” groups can be a double-edged sword; often there’s as much misinformation to be found as qualified advice. “But you’ll also see things in the comments like, ‘Where are you located? Maybe there’s a TIP trainer nearby that can help you,’ that kind of thing,” Babbie explains. “The beautiful thing about this community is [that people] really are here to help.”

It’s that community, in fact, that keeps Brandy and Babbie showing up, trailers empty, to nearby TIP Storefront pickups, month after month and year after year. Even on her toughest TIP training days, Babbie says, all she needs to do is check her in-box, or the saved text messages in her phone. There, she reads through the progress reports and thank you notes from previous adopters—some describing first rides on their mustangs, others sharing funny stories about their quirks, or a great interaction they had at the barn that afternoon.

“You have those days when you’re tired and feel beat up, carpel tunnel killing your wrist, and your hair has turned the color of red clay, and you think you’ve gotta take a break from gentling new mustangs,” Babbie wrote in a Facebook post this spring.

“Reading these messages brings you right back, knowing [you] are helping one at a time get out of holding. And the obsession continues.”

Think you have what it takes to be an approved TIP trainer with the Mustang Heritage Foundation? Learn more about the program here or submit your online application today.