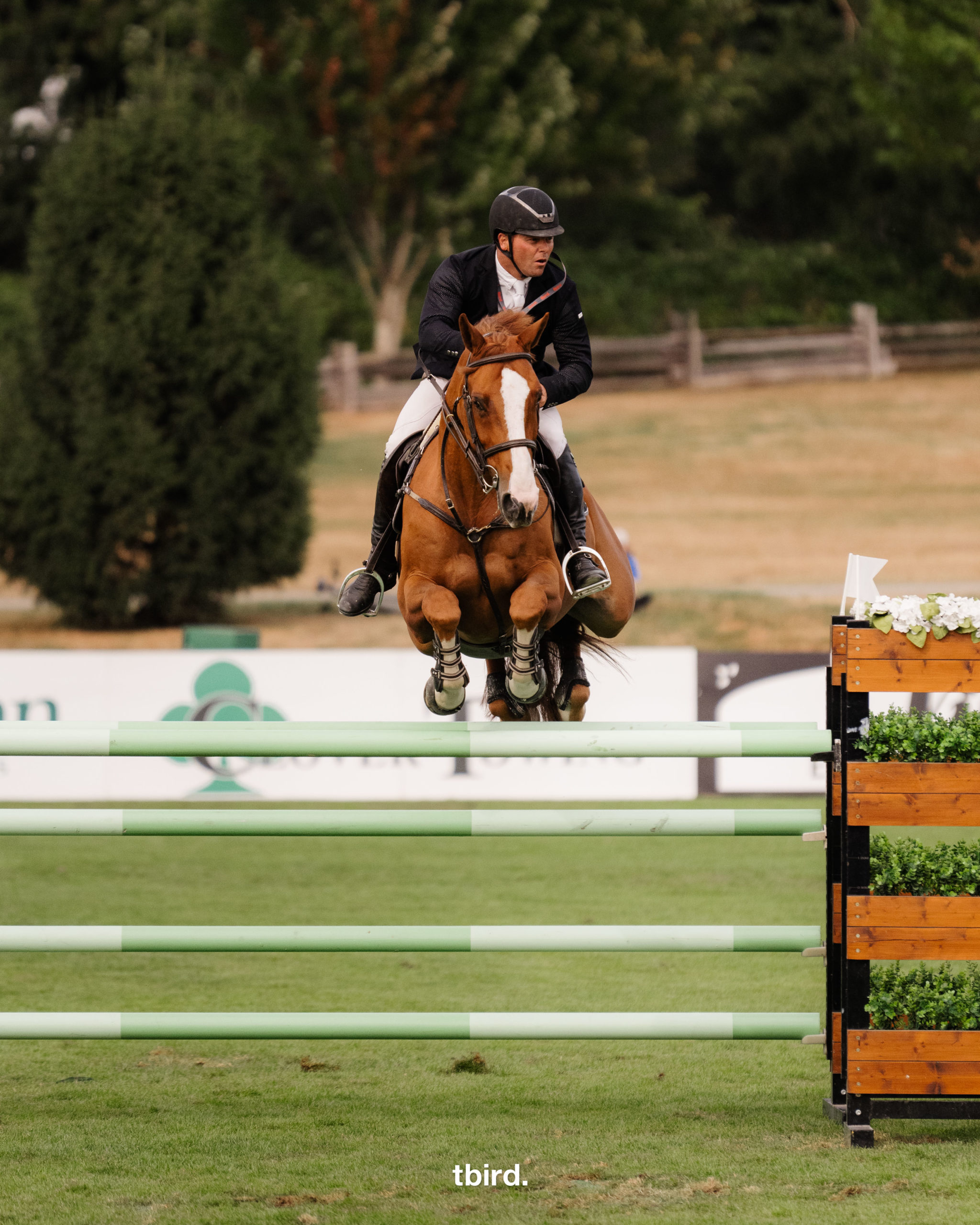 He couldn’t bring himself do it two weeks in a row.

“During our six weeks in Traverse City, I used ‘ET’ as my team horse for Major League Show Jumping,” King said. “Honestly, I wasn’t going to show him [this week], but I didn’t show him the last two weeks, and after the horses got home last Monday, he started letting me know he was fresh enough to go.”

The pair accelerated with every jump of Holmes’ winding track, despite its lack of gallop lanes. In a class that saw the lead change hands repeatedly, King and Etalon’s time of 60.44 seconds held, as he topped a closely bunched group of talented combinations.

“I was a little conservative at the beginning, I thought,” King said. “‘ET’ can be very fast when I can let him open up to the next gear, but there was nowhere to open up in the course.

“I was able to do one less stride to the double of verticals that I saw other people do, and I did one less [stride] to the last. That squeaked me just in front of the others,” he continued. “If I could do it again, I could probably knock a second or two off at the beginning of the course. I’m glad it worked out, and it didn’t take too much out of the tank for Saturday [the $100,000 CSI3* VOLVO Canada Cup].”

Thunderbird Show Park is home for King, who may ride for the U.S. but has been based in Langley, BC since 2018. He received permanent resident status in 2019 and was brought to the area by his wife Emily, who hails from Victoria.

“This is my hometown. I consider [the Fort Grand Prix Arena] my ring,” King said. “I was bummed last week sitting on the sidelines [for FEI competition], because my horses had just arrived from the east coast. I’m glad we decided to [show Etalon] this week.”

Etalon, Christine Maclean’s 12-year-old KWPN gelding, has been in King’s string for the last three years and has repeatedly exceeded expectations. From the 1.30m division to the international level, the chestnut has been a picture of consistency and competitiveness.

“He’s the sweetest horse on planet,” King said. “He’s a big, nice guy, but he’s also very competitive. His record is very good. He’s been one of my biggest winners over the last couple seasons. I feel like he’s ready to step it up and try some bigger [events] this season.”

While Etalon is tops amongst King’s mounts at the Summer Fort Festival, the rider is staying busy at tbird catching up with younger mounts that remained at home during the Traverse City circuit.

Meanwhile, the remainder of the FEI cast is resting following a highly successful summer. King made the podium in two separate CSI5* grand prix events at the Flintfields Horse Park—on two different mounts, Coffee to Go and Magic Mike—while the venerable Enzo won the CSI3* Winning Round competition on August 5.

“I have four winning 1.50m to 1.60m horses. That’s hard to do,” King said. “I feel really lucky to be able to have that kind of depth, to be able to pick your bullets for when you need them and keep everyone fresh and ready for each event. I’m honored to ride them.”

Catch all the action in the Fort Grand Prix ring on tbird tv.