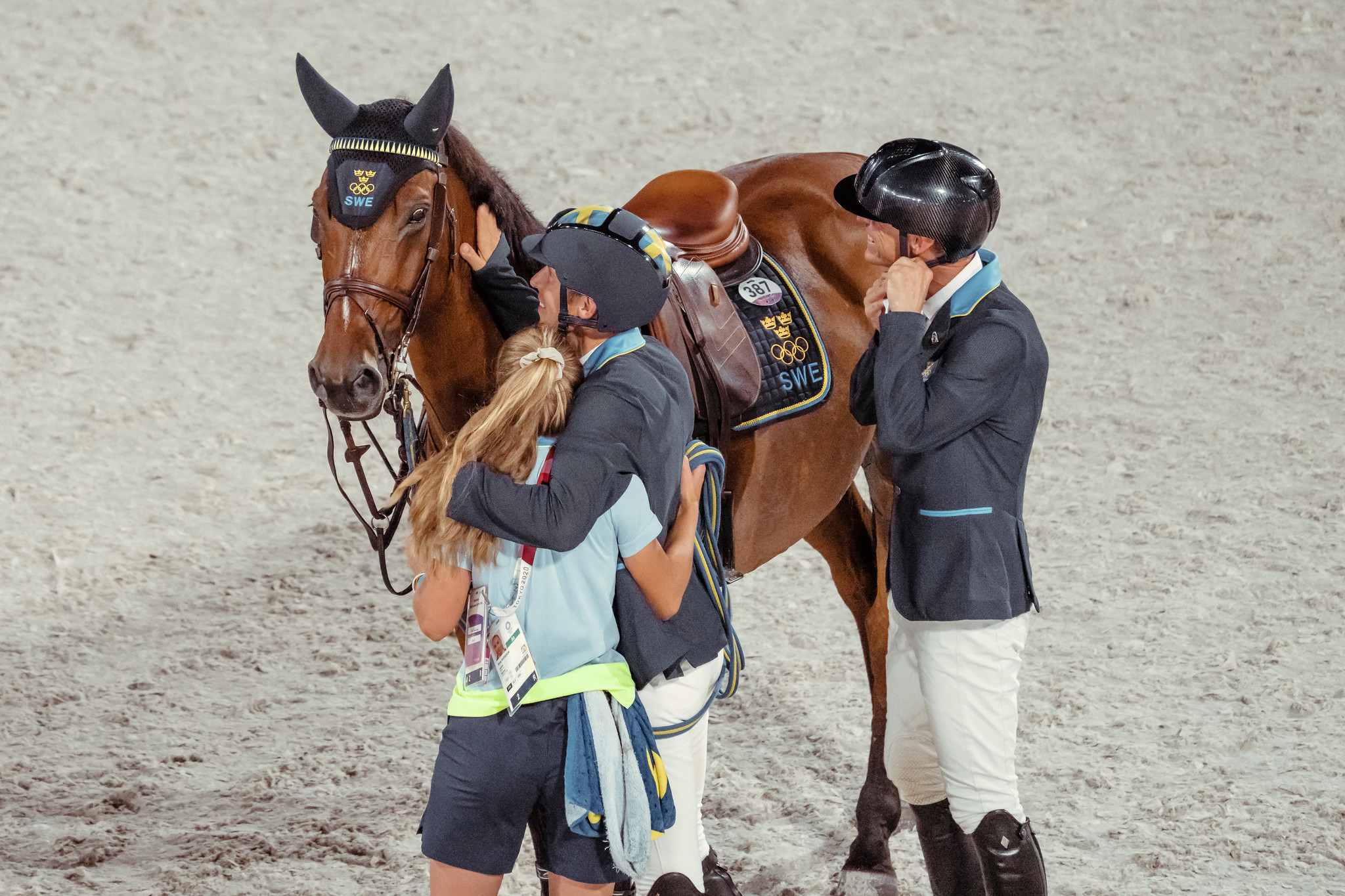 The last word anyone would use to describe the Tokyo Olympic Games would be “normal.”

But it certainly was memorable.

After a year delay and highly scrutinized lead up to competition, the Games of the 32nd Olympiad were successfully completed in Tokyo. Equestrian competition took place at the Baji Koen Equestrian Park and the Sea Coast Cross Country Course venues, and while not a single spectator was allowed in, the athletes put on a show that had all the makings of a broadway spectacle—even the music.

Hopefully you had your popcorn ready.

From history-making women to barefoot champions, a long-awaited gold and a “spa morning,” enjoy my top 10 moments from the Olympic Games in Tokyo:

Dressage was the opening equestrian event of these Games, and heading into them, the blockbuster names of Steffen Peters and Adrienne Lyle dominated the conversation for the United States.

Schut-Kery and Sanceo recorded personal bests in all three tests—Grand Prix, Grand Prix Special and Grand Prix Freestyle—and ended up anchoring the U.S. to its first silver medal in dressage in more than 70 years.

Schut-Kery acquired Sanceo when the stallion was just under three-years-old, and their partnership spans 12 years. The strength of that partnership positively shined—repeatedly—in Tokyo.

For me, it was the best surprise of these Games.

Steffen Peters and His #RaveHorse Win the Internet

In fact, dressage as a whole surprised me: It was the most entertaining dressage competition I have ever had the pleasure of watching. The result of that was a massive response from the non-equestrian public that suddenly took notice.

The addition of music to the Grand Prix Special was a tremendous hit, and in the Freestyle, the implementation of more modern, relative song choices connected dressage to the masses.

You can thank Steffen Peters for that. Peters’ bold freestyle routine pushed the envelope with EDM (electronic dance music), with beats that fell perfectly in sync with the footfalls of Suppenkasper’s hooves, whether at half pass, passage, piaffe or extended trot, thanks to the genius choreography that came together through the collaborative works of Marie Medosi, Taylor Kade and Terri Gallo.

While Peters didn’t make the individual podium, he won the Internet. In one viral TikTok video, a user calls beyond her television screen for one of her peers to “come look at this rave horse.” Suppenkasper, meanwhile was executing a passage to the song, Calabria.

Dressage later caught the attention of Kevin Hart and Snoop Dog, who called highlights “cold” on their Olympic Highlights show (on NBC’s Peacock platform) as producers showed them highlight clips at random to commentate. As dressage came on the screen, Snoop referred to a half-pass as “horse crip walking.”

“This horse is off the chain!”

I definitely did not see that coming.

After cross country, it didn’t seem like anyone would catch the red hot World No. 1 Oliver Townend (GBR) and Ballaghmor Class, who positively sailed through the first two phases of eventing competition.

Julia Krajewski (GER), however, was quietly making her move. She added just .40 penalties to her 25.20 dressage score at the Sea Forest Cross Country Course, and when Townend shockingly pulled a rail in team jumping, the German rider took over the lead. She would not relinquish it.

Last to go in the individual final—new for these Games, an additional shortened jumping round for the top 20 athletes—Krajewski had less than a rail in hand. She delivered a tremendous performance with her 11-year-old mare, Amande de B’neville, coming home on just .40 additional time penalties to clinch the gold medal. It was a momentous occasion, as Krajewski made history. She became the very first female athlete to win an individual gold medal in the more than 100-year history of the sport in the Olympic Games.

May there be many more.

All In is Awe-Inspiring

Five years ago at the Rio Olympic Games, Peder Fredricson (SWE) and All In earned the individual silver medal. All In jumped the entire competition without touching a single pole—just the second horse in history to do so.

The bay continued his streak in Tokyo but again settled for an individual silver medal when he and Fredricson fell just short of the favored Ben Maher and Explosion W.

No horse deserved gold more than All In, and by the competition’s end, he finally got it. Sweden bested the U.S. in a thrilling jump-off for team gold in Tokyo on the final day of equestrian sport of these Games. Last to go, Fredricson and All In sprouted wings, clinching the gold with a jump-off round that I could watch over and over again.

Over five years, two continents and 12 rounds of jumping, All In has incurred just a single rail in Olympic competition. Hero status achieved.

Two/thirds of the gold-medal winning Swedish jumping squad competed completely barefoot in Tokyo. Neither All In nor Henrik von Eckermann’s King Edward wear shoes, a rarity in top-level sport—unless, apparently, you ride for Sweden. Uniquely, these two horses also make up two of the three horses in Olympic history to complete an Olympic Games without having a rail. While All In achieved the feat in 2016, King Edward replicated it this year.

Santiago Varela (ESP)’s courses in Tokyo were eye-opening, to say the least—for both horse and rider. Varela and his team, over the course of three and a half years, built 60 fences, all representative of Japanese and Olympic motifs. Some were so intricate, they took months to paint.

From a jumbo-sized sushi roll to kimonos, geisha faces, samurai, koi fish, cranes, origami and the Tokyo skyline, there was a lot to look at. Then there was the sumo wrestler. I have seen human figures painted on fences, but I have never seen a human statue erected within a jump. In Tokyo, a life size sumo wrestler figure greeted horses at Fence 10 of the individual qualifier at the right standard—and his position suggested he was about to pounce. Coming off a sharp turn, a few horses were caught off guard at the sight. I don’t blame them.

McLain Tricks Us All

At the First Horse Inspection for show jumping, Team USA threw us a bombshell. Five-time Olympian McLain Ward was quietly named the traveling reserve. Say what?!

Ward sat out individual competition, but it was later revealed that it was all part of a strategic plan. Ward came in with a fresh horse to team competition, anchoring Team USA to the silver medal.

Props to US Equestrian for promoting the nation’s athletes in Tokyo and having fun doing it. Case in point: “the headphone challenge.” In this game, one ride wears headphones and has to decipher what the other rider is saying.

This is team camaraderie at its finest.

Equestrian athletes repeatedly prove that age is just a number. With her silver medal, Laura Kraut became the oldest U.S. woman (55) to win an Olympic medal since 1904. Peters (56), meanwhile, became the oldest U.S. Olympic medalist since 1952. Let’s not forget that Ian Millar (CAN) was 65 at his final Olympic Games appearance in 2012. These riders still have more to give, especially with the next summer Games now just three years away.

World No. 2 Martin Fuchs (SUI) and Clooney were among the favorites for individual medals, but it just wasn’t to be for the 2019 European Champions.

Fuchs, however, was a winner in my book for his horsemanship. The day of the individual final, he showed us some photos of Clooney’s “spa morning,” the magnificent grey hardly recognizable while covered in dirt. The grey rolled on his lead shank, and a proud Fuchs posed with him while Clooney stood ankle deep in a cross-country water element.

As McLain Ward reflected, “We owe this dream to our horses,” and Fuchs, even on the sport’s biggest stage, allowed his horse to be just that—a horse. Thank you, Martin.