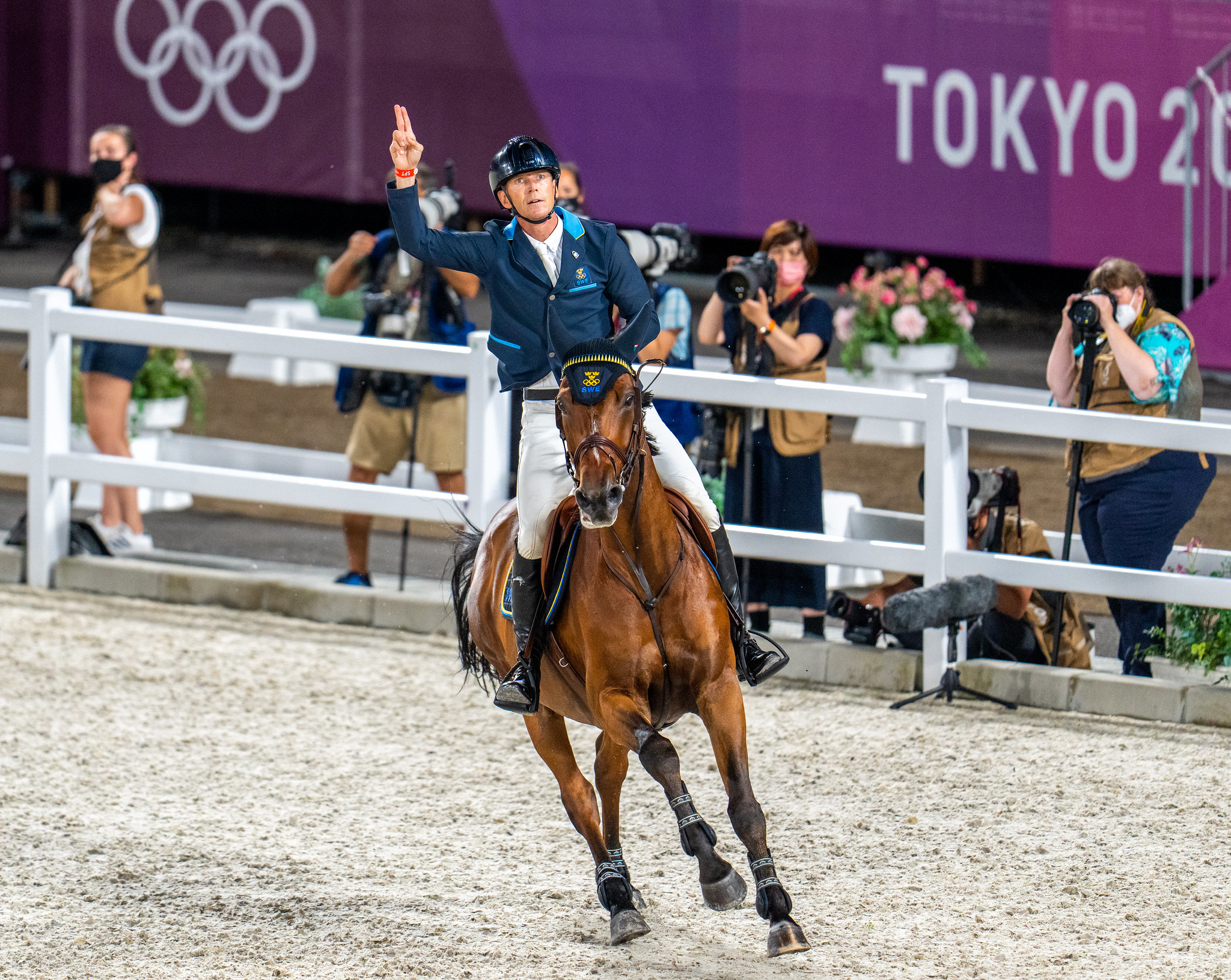 Peder Fredricson (SWE) and All In have been snubbed for gold on two occasions—once at the 2016 Rio Olympics and again in the individual final to kick off show jumping competition in Tokyo.

Announced the “Olympic hero” by commentators before he was even through the jump-off’s start timers, Fredricson lived up to that billing. It was a brilliant display of strategy and rideability for horse and rider. The pair had the smoothest of inside turns off the first fence, rolled back tightest to the wall, and galloped boldest to the final two oxers, positively flying home through the timers.

Under extraordinary pressure—with the USA already clear and quick with all three of its riders (the entirety of both teams jumped off)—Fredricson and All In delivered a breathtaking performance. Crossing the finish timers in 39.01 seconds, they put France on a cumulative jump-off time of 122.90 seconds, nearly two seconds ahead of the U.S. (124.20).

“Oh, the pressure was on!” Fredricson said. “In these situations, when you have two teams like this, you really want to win. McLain was fast. I saw his round, and I knew what I had to do, and today the poles stayed up, and the time was on my side!

“It’s unbelievably satisfying to get this gold,” he added. “And my horse deserves it also for the way he jumped. I’m so happy for him and his owner and groom and the whole team and my teammates. This is a great feeling!”

Sweden has shined throughout individual and team competition in show jumping, but they did not enter Saturday’s team final with a cushion, its team’s clear rounds in qualifying all negated while beginning the final on a clean slate. That left the squad of Henrik von Eckermann, Malin Baryard-Johnsson and Fredricson needing to prove themselves yet again. But over Santiago Varela’s (ESP) massive track, Sweden had its first rails of the competition. Von Eckermann and King Edward navigated a clear round, but Baryard-Johnsson and Fredricson each had a rail to put their team on 8 faults.

It opened the door for other nations, and the United States capitalized. Laura Kraut (USA) put forth a heroic ride aboard the strong-willed Baloutinue to give Team USA its first clear round of the Games. Jessica Springsteen (Don Juan van de Donkhoeve) and McLain Ward (Contagious) had just a single rail apiece, putting them even with Sweden in the silver medal position at the end of the final rotation.

Meanwhile, France had quietly snuck into the lead on a score of just two time faults—one apiece from Simon Delestre and Mathieu Billot—and Penelope Leprovost entered the arena with a rail in hand. But it was not to be for the defending champions, as Leprovost was shockingly eliminated after two refusals.

France dropped from the top of the leaderboard down to eighth as Belgium secured team bronze. It left the U.S. and Sweden to battle it out for top honors.

Every rider delivered, and not a single pole fell in the jump-off for either nation; it took a herculean effort from Fredricson to decide the result. It was sport at its finest, and there’s no doubting that Sweden’s gold—its first since 1924—was both well earned and well deserved. Even more remarkable is the fact that the Swedish horses jumped two more rounds than Kraut’s Baloutinue and Springsteen’s Don Juan—and three more than Ward and Contagious, who did not contest individual competition.

“It was great to be in the battle,” Ward said. “Sweden’s win wasn’t unexpected here, but they took it to another level. We would have had to have an incredible day to beat them. I think we pushed them right to the limit, and in competition when you push them to that limit and they still win, you’ve got to be proud of the fight.”

For the U.S., it was a tremendous rally after not a single American advanced past individual qualifying. Clearly, the U.S. contingent had planned and strategized well for this Olympic format, with all three American riders performing their best when it counted most.