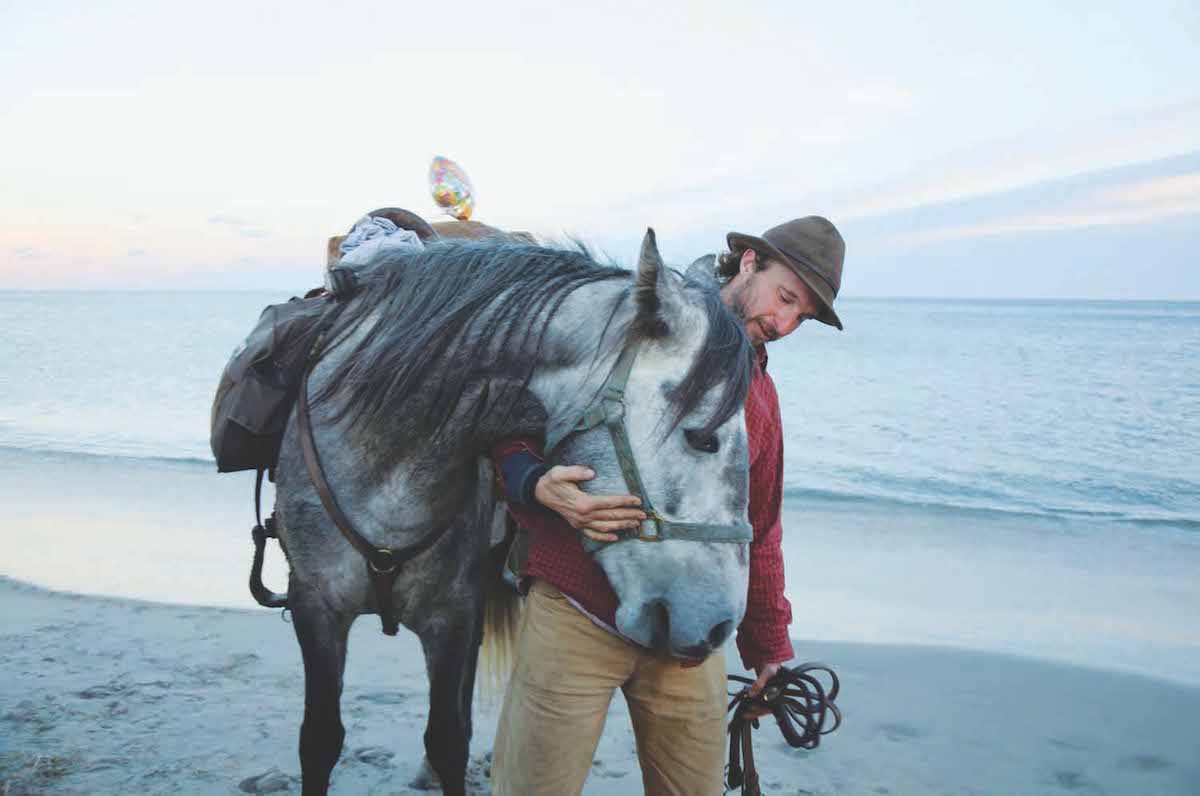 We horse people often have a bucket list of equestrian adventures we’d like to have. Trying different disciplines, visiting famous farms or venues, galloping along a beach—all of these are commonly cited as horse-related dreams we’d like to see come true. Riding across the United States is another, which happens to today seem, with less open land and few quiet roads, almost impossible. Yet in 2013, Jesse McNeil set himself the goal to find a horse, make himself into a horseman, and ride from the Pacific to the Atlantic Ocean. As green as they come with a young, untested mount, the challenge he set for himself and his mare Pepper was massive. But over the course of eight months and 14 states, he would learn that his journey was about more than finishing what he had set out to do; it was about building a relationship with his four-legged companion and valuing her well-being as much as his own.

Jesse shares one harrowing event in his memoir On the Hoof, when a fall on the road took him and Pepper by surprise.

We grind through another five miles. Atop a hill, small ranches of ten and twenty acres come into view. The nearest ranch, a half-mile away, shakes my world—I go from go from seeing constant rock outcroppings to vinyl siding. I stare at distant mountains, wanting a more natural view, as we begin down the hill.

Suddenly, I rise over Pepper’s neck and am in freefall, the weight of gravity pulling me down. The blue sky flashes by, then the stifling nearness of white ground rushes toward my face. My left knee slams first, tossing me onto my right elbow. Then my cheek hits the gravel with a deafening thud. A sickening feeling rises fast—that Pepper will fall on me next.

I twist around to scramble away but then see her behind me, a crumpled mess—the saddlebags flipped over and her limbs lifeless. Her neck is craned around her bulky flank, shielding her head.

I pull myself up enough to lean toward her when, with a lurch, Pepper untwists and leaps into the air, landing on all fours. She starts walking away, dragging me along, my left boot still stuck in the stirrup.

She stops and drops her head to graze along the road shoulder. I wrestle my boot free and stand up, still reeling from the thought that she might’ve broken her neck. She’s a wreck. A gash over her left eye streams blood, dripping on the ground. Her knees have scooped out fleshy divots caked with gravel; the left one bleeds profusely. Her muzzle is pocked with road rash—pebble-size dots cover her nose and mouth, some maroon, some bright red. I watch Pepper stretch her head forward, reaching for more grass—obviously her neck isn’t broken.

I fared better—a few scratches are bleeding, and my left knee and right arm pound with pain, but I’m not broken either. I turn around to see what the hell she tripped over—but there’s no rock or pothole on the smooth graded road. All Pepper’s iron is intact, and the rein never left my hand. From a little different angle, she would’ve rolled right over me.

I look down and see a spray of blood on the gravel, sending me into high gear. I reach to the saddlebags for tape and iodine, and am ready to rip a shirt apart. When I look up—we’re just steps away from houses full of supplies. So I walk Pepper as fast as she’ll go, checking her gait for more injuries.

At the closest house I see a woman standing on the back stoop. I wave, but she’s on the phone, not looking my way. I walk up the driveway and around to the back of the house just as I hear the screen door shut. I sprint up the steps and knock loudly on the door, then hustle back to the saddlebags to find my first-aid kit. Three horses stand in a field and watch. The gash over Pepper’s left eye is clotting some, but blood flies off her face as she whips her head around to stare at the horses.

“Hello?” A woman opens the screen door and smiles, as two young children run up beside her.

“Sorry to bother you. My horse just took a fall…can I use your garden hose? She got all messed up.”

The woman points to the hose by the foundation wall. “I’ll be right out with iodine and hydrogen peroxide.”

Pepper keeps staring at the horses, her neck twisted around to watch them. So I shift her around and keep digging through the saddlebags for gauze and tape. The door swings opens again and the woman comes down the steps with two large bottles and a box of bandages and gauze. I introduce myself.

“I’m Laura.” She holds Pepper’s reins while I wrestle with the hose and get the water turned on. Three children surround us. Pepper’s skittish as I douse her knees, but a steady rein keeps her settled enough.

With my fingernail and the tip of a knife, I gently pick out pebbles and dirt from the fleshy saucers that are now her knees. Laura soaks a paper towel in iodine that I pad against Pepper’s knees. Then I spray on hydrogen peroxide, sending her into a tizzy. We settle her down and apply large squares of gauze to cover the wounds and wrap on medical tape.

“I don’t know—she just tripped, I guess, on her own legs. We both went flying in a somersault.”

We move on to the meaty split over Pepper’s left eye. It’s not dripping as much as it was, but looks stitch-worthy—three-eighths of an inch deep. Pepper remains calm as I clean the cut and doesn’t even flinch when I dab on iodine.

“I think with regular bandages changed out she’ll be alright and not need stitches. Get some antiseptic spray,” Laura suggests.

I take her advice for now, seeing as she has three horses.

“Two of those out there are Tennessee Walkers too,” she tells me.

I tape on a bandage. We both agree little can be done with Pepper’s muzzle, except swabbing on antiseptic ointment. With all the bandaging completed, Pepper looks like a heavyweight boxer that’s been whupped in a fight. It’s a pathetic sight really, and I hurt that she’s hurt.

I lay a big pile of grain on the orange tarp to reward her patience.

While Pepper eats, Laura offers me a sandwich. Her six-year-old, Maggie, is so excited she draws a picture of Pepper and me. I’m in the saddle wearing a hat with a big crescent moon beside me, as large as I am.

“Do I ride at night?” I ask the little girl.

This excerpt from On the Hoof by Jesse McNeil is reprinted with permission from Trafalgar Square Books (www.HorseandRiderBooks.com).