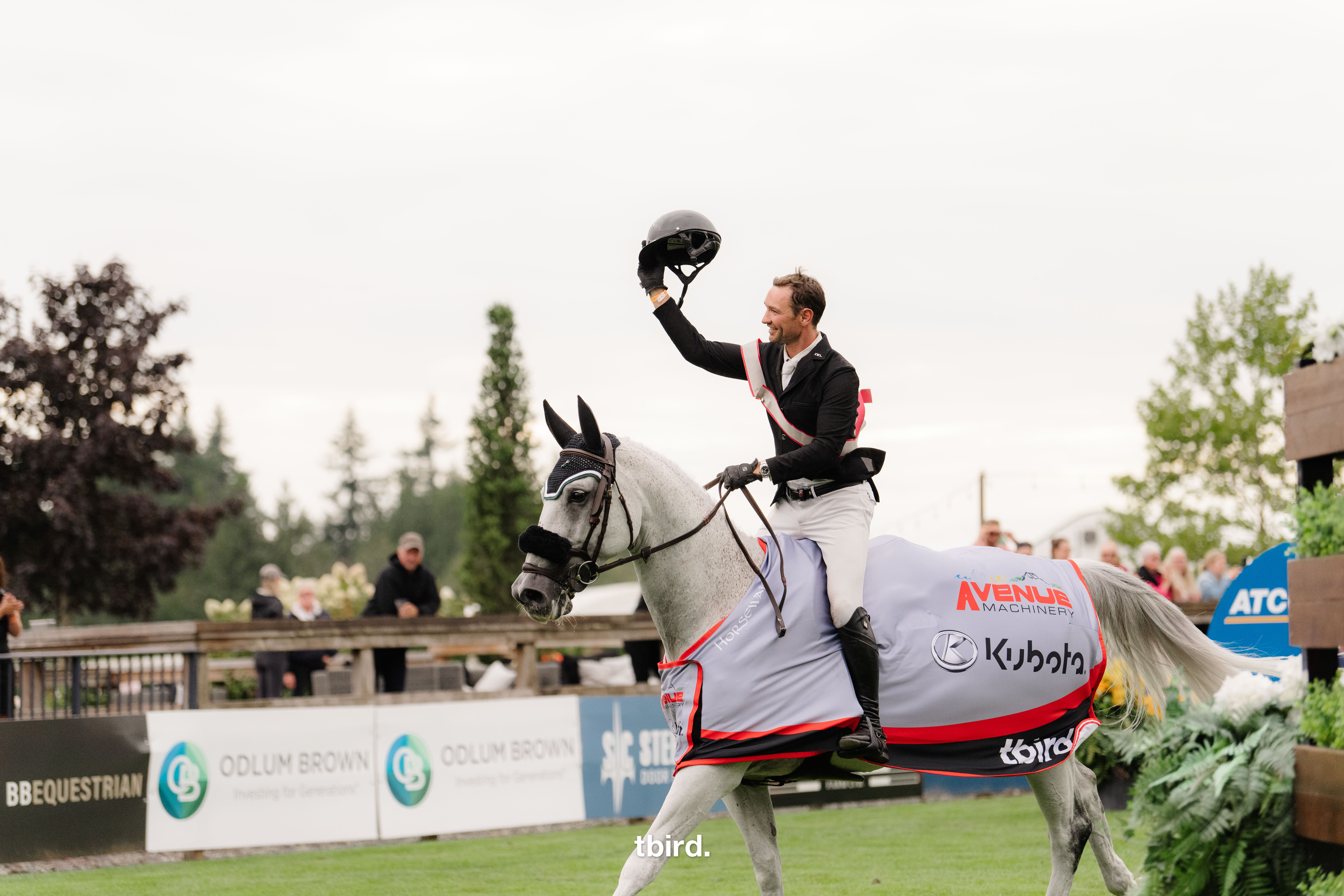 More than two years ago, Brian Morton (CAN) was preparing to make a thrilling homecoming. A few months into a new job as stable rider for Spruce Meadows, he was primed to return to Thunderbird Show Park, located just a few miles from where he grew up, for the 2020 Odlum Brown BC Open CSIO5*.

Then the world shut down.

Morton spent the pandemic-forced quarantine getting to know his new string of talented mounts, and the extra training time has not been without its benefits. In October, he came out to tbird for Canada’s only international event of 2020, winning the $73,000 ATCO Cup Grand Prix CSI2* with Spruce Meadows’ Cadillac.

“I absolutely love the job [at Spruce Meadows],” Morton said. “Now, I’m in my first full year of competing the string and my second season [overall]. I’m starting to feel now like I really know the horses. I’ve had a chance for them to get to know me and for our partnerships to really form.

“The team behind me at Spruce Meadows is really fantastic,” he added. “Linda [Southern-Heathcott], as the owner of the facility and the horses, along with the managers and the grooms, do such a good job of supporting the horses and I. It takes an incredible stress and burden off me.”

It’s hard to envision a better fit for the Spruce Meadows job than Morton. The 35-year-old is equal parts enthusiastic and soft spoken, patient and calculated. Not to mention, his talent and his reputation precede him.

Morton won the Western Division of the 2004 Jump Canada Talent Squad Series; received the prestigious North American Rider’s Group Grant; and was short-listed for the Canadian Show jumping Team for this first time in 2012. In his youth, he tried every discipline imaginable, from three-day eventing to polo, gymkhana and dressage, and he won his first World Cup event—at tbird, no less—before age 30, despite not fully specializing in show jumping until late in his teens.

Still, when Morton learned about a potential job opening within the Spruce Meadows operation, it took prompting from friends to inquire, admitting the thought had not occurred to him. When called, the hiring process did not take long. At the Summer Fort Classic, he’s brought out five mounts: greys Cadillac, Crusador Z and Ice Man du Houssoit, along with Chili Pepper SM and Concales.

“This show feels more like pre-pandemic. Being in that main arena with a little bit of a crowd and some atmosphere, that felt pretty fantastic,” Morton said. “It’s always great to get a win on home turf.”

Cadillac and Crusador Z are the most accomplished and experienced of Morton’s string; Morton plans to alternate the rides in feature competition across tbird’s two three-star weeks of competition. Cadillac will be first up in Sunday’s $100,000 CSI3* ATCO Cup 1.50m.

“I’m managing the string carefully at tbird. Cadillac has had a little break from the big classes, and this will be his first real test in a while. I’m excited,” Morton said.

Chili Pepper SM is the resident FEI speed horse, and he answered when called on in the Kubota Canada Winning Round competition. A Spruce Meadows homebred, he got his name through a foal-naming contest, and the spice implied by his moniker definitely fit his character.

“He’s really careful and really fast,” Morton said. “He needs his confidence built and to really trust his rider. Those are my two biggest priorities [with him], to keep him confident and keep him believing in me. If I do that, we get a result like we enjoyed [in the Kubota Canada Winning Round].”

While Morton is enjoying his homecoming, there’s one more venue he’s eager to show at. After two years of unfortunate cancellations, Spruce Meadows reopens for its September series in just a few weeks’ time.

“I’m so excited for that. There’s something slightly ironic about working two years for Spruce Meadows and having not shown there [as their stable rider]. I’m itching at the chance.”

“I’m loving my job, the horses are fantastic, I’m thrilled with the wins and am super excited.”