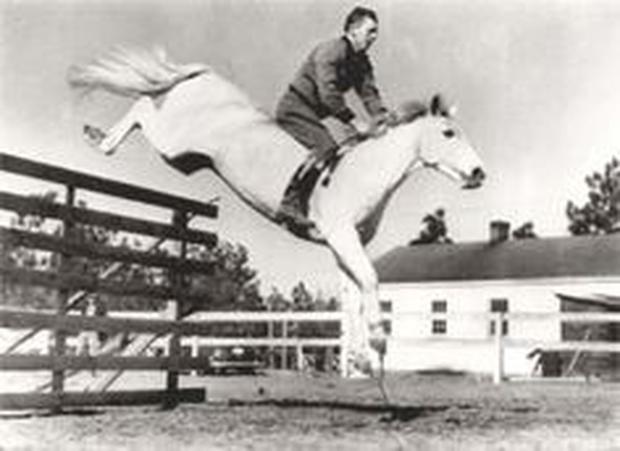 From a family with six generations in the horse business, Mickey Walsh emigrated to the United States from his native Kildorrery, County Cork, Ireland in 1925 at the age of 18.

His humble beginning was leading horses out in Central Park in New York City. Walsh started competing hunters and jumpers with Jim Rice in 1926 before moving to Massachusetts where, by the 1930s, he was winning top honors at virtually every major horse show of the day, including Devon, the National Horse Show and the Royal Agricultural Winter Fair.

His top horses included Erin’s Son, Bright Light, Faugh-A-Ballagh and the unforgettable Little Squire, a 13.3 hand Irish pony he guided to the Open Jumper Championship at the National Horse Show. In 1937, Walsh mounts won 147 blue ribbons and more than $7,000 in prizemoney, an amazing sum in those days.

After moving to Southern Pines, North Carolina in 1939, Walsh earned a second outstanding reputation as a horseman, this time training steeplechase and timber horses. He also remained active on the hunter/jumper circuit, monopolizing ribbons throughout the next decade along with George Braun and Cappy Smith. Among his great horses of the 1940s was Bob­ O-Link, the top hunter at the 1947 National Horse Show.

In 1977, Walsh was inducted into the North Carolina Sports Hall of Fame. He was nominated to the Racing Hall of Fame in 1983.