Pavarotti Withdrawn from Tokyo Games due to Injury 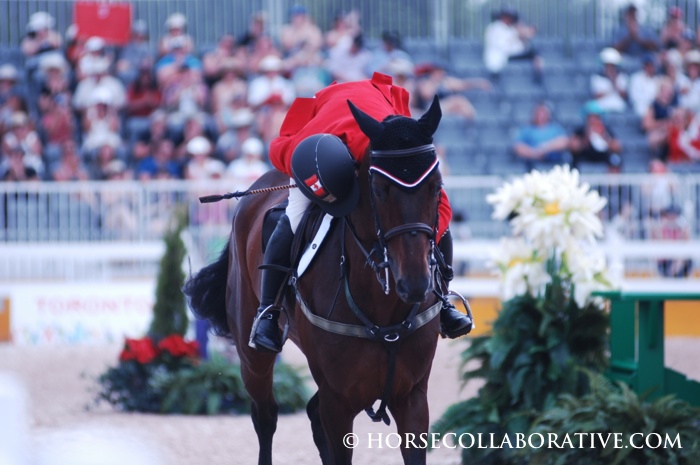 Canada’s Jessica Phoenix will not be making a three-peat Olympic appearance at the Tokyo 2020 Games.

The two-time Olympian withdrew her long-time mount Pavarotti on the eve of eventing competition due to an unspecified injury.

The 19-year-old Westphalian gelding, who is owned by Phoenix, sustained a minor injury during his final preparation gallop the morning of Tuesday, July 27. With the best interest of Pavarotti, Phoenix and the sport in mind, the team decided not to present Pavarotti at the first eventing horse inspection on Thursday, July 29.

“We were so excited to see Pavarotti finally take on Olympic competition but horse health and safety remains priority number one,” said Eventing Chef d’Équipe, Fleur Tipton. “We are thankful that Pavarotti’s injury is minor and eternally grateful to his care team for ensuring his comfort and ability to fully recover. Jessica and Pavarotti are a team for the ages and we fully support them both through this heartbreaking turn of events.”

Phoenix and Pavarotti represented Canada at two World Equestrian Games (2014 and 2018) and earned five Pan American Games medals over the course of their career, including team bronze at Lima 2019, individual silver and team bronze at Toronto 2015; and individual gold and team silver Guadalajara 2011. Phoenix competed at the last two Games, contesting Rio 2016 aboard A Little Romance and London 2012 with Exponential.

“Today we have made the heartbreaking decision to withdraw Pavarotti from the Tokyo Olympics due to a minor injury sustained on our last gallop. While I’m devastated that Rotti will not get to compete and show his talent on the world stage, I’m thankful that he’ll be back to his usual self soon. I’m blessed that our Canadian riders are a tight group of supportive teammates who rally around each other in our times of need. Thank you everyone for your support during this challenging time and we look forward to cheering on Colleen Loach and her incredible horse Qorry Blue d’Argouges. Let’s Go Canada!!! 🇨🇦🇯🇵❤️ @equestrian_can“

Canada’s top ranked rider, Colleen Loach, will be the sole competitor riding for the Maple Leaf in eventing at Tokyo. She rides her Rio 2016 Games partner (and horse with the whitest tail ever) Qorry Blue d’Argouges.

Olympic eventing competition starts on Thursday and continues through Sunday.