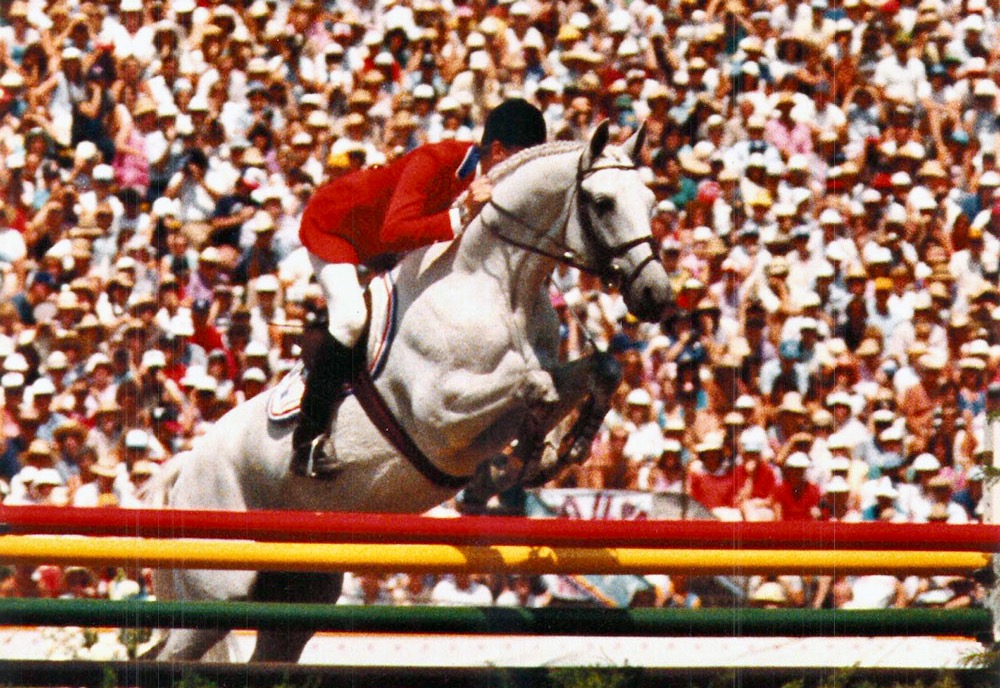 Abdullah was one of the most successful horses the show jumping world has ever seen. His illustrious career was highlighted by his standout perfor­mances at the 1984 Olympic Games, 1985 World Cup Final and 1986 World Championships.

Abdullah was purchased by Terry and Sue Williams as a three-year-old stallion as an event and breeding prospect. The striking grey Trakehner stallion soon showed his propensity for show jumping after a successful dressage and eventing career.

Abdullah embarked on a show jumping career that saw him carry riders Conrad Homfeld, Joe Fargis and Debbie Shaffner to great Grand Prix success, three World Cup Finals, and spots on U.S. teams at CSIOs in Europe. However, it was with Homfeld in the irons that he put together his incredible three­ year stretch that ranks among show jumping’s most memorable.

First came his double medal performance at the 1984 Los Angeles Olympic Games. Homfeld rode Abdullah to a clear round in the team competition to help clinch the United States its first ever Team Gold Medal. The pair also won the Silver Medal in the individual competition.

In 1985, Abdullah and Homfeld finished first at the FEI World Cup Final in Berlin. Then, in 1986, with Abdullah now age 15, he and Homfeld helped the U.S. win another first ever Team Gold Medal, this time at the World Championships in Aachen. The pair served as the anchor for the team, and Abdullah was named Leading Horse of the competition, with Homfeld adding another Individual Silver Medal.

Following Abdullah’s jumping career, at the age of eighteen, he returned to Williamsburg Farm in Middleport, NY. The farm centered its breeding pro­gram around the stallion, producing a long lineage of Abdullah descendants who would go on to much success including IHF and IJF Championships as well as AHSA Horse of the Year awards. One such descendent is the stallion Airborne Monticello, who was on France’s 1996 Olympic Team and 1998 Silver Medal World Championship Team.

Abdullah was honored by The Chronicle of the Horse as one of top 50 horses of the twentieth century. He was also named winner of the American Trakehner Association’s Palmenblüte Award five times. Following his fifth win in 1986, the trophy was retired in his honor and replaced with a new one.