Granato and Carlchen W Trust in the Plan 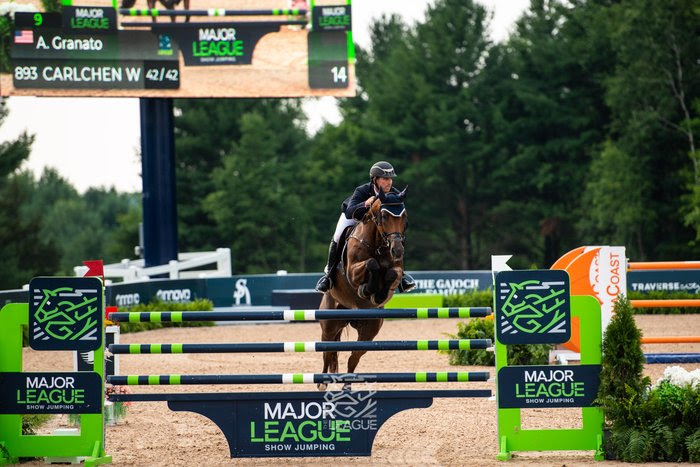 Returning for the jump off, Mexico’s Arturo Parada Vallejo and Coachella 4 were the first to post a double clear, setting the time to beat in 42.6 seconds. It didn’t hold long. Schuyler Riley (USA) and Robin DePonthual shaved two seconds off, crossing the timers in 40.36 seconds.

But only one combination was able to race in under the 40 second mark.

Granato and his partner of seven years, Carlchen W, set a blazing track around the eight-obstacle course to stop the clock in just 38.69 seconds.

“He’s so quick across the ground anyways and he’s fast in the air. The first three turns were really tight and I think a lot of people were getting lost on their pace and their decision, especially in the turn to the NetJets vertical. I didn’t see exactly what I wanted initially but I trusted him enough and kept coming forward till he knew where we were at and that worked out. Then from there I tried to keep as smooth and forward as possible,” said Granato.

Not too shabby for a rider that missed the course walk.

“I didn’t actually get a chance to walk the jump-off, I was actually busy at another ring so I got a quick look and got to see two of the riders go. Again, I’m lucky I’ve had my horse for so long because I think you needed to have a lot of trust in your horse and they needed to believe in the plan because there were a lot of tight turns to start it off. He felt great so I rode my plan going in and it paid off.”

Catch all the 5* action at MLSJ on majorleagueshowjumping.com.