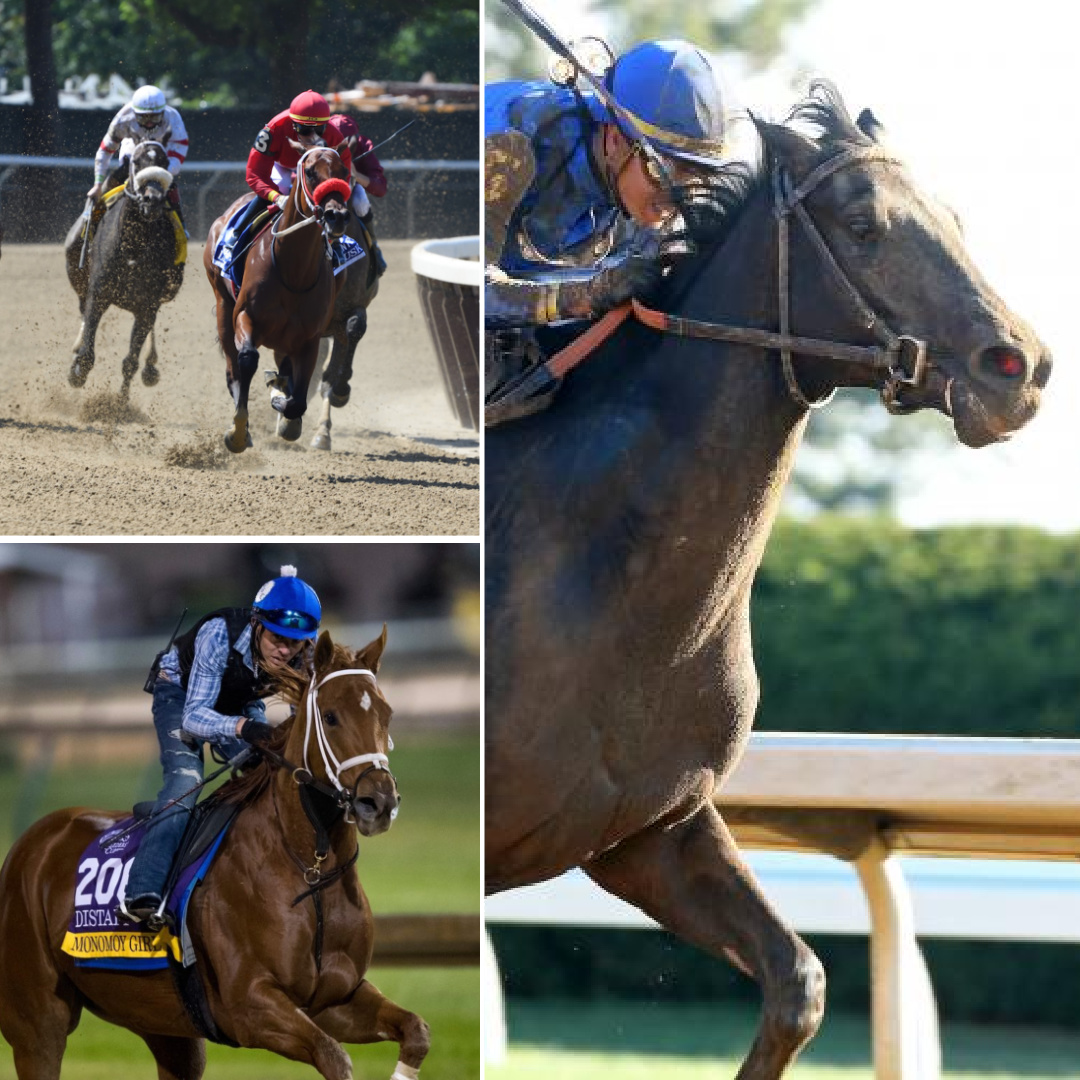 His chief competition? Two guys in the next stalls: Godolphin’s own Dubai World Cup winner, Mystic Guide, followed by Eclipse Award Two-Year-Old Champion and winner of the thrilling Jun. 5 Belmont Stakes, Essential Quality—now grasping a six-for-seven record in his three-year-old hooves. The Tapit son’s only misstep was a current fourth-place finish by a mere length in the Derby.

Those three dominant colts complete an awesome trio for Sheikh Mohammed’s boys in royal blue. A Classic win for any of the three could take away some of the sting from the whack at the start of the race that may have cost Essential Quality the Derby win Godolphin’s owner so covets.

Barring the unexpected—remember, this is Thoroughbred racing, with a long summer and fall season still to go—all three can be expected to be in the gates for the starting bell of the Classic.

No doubt, they’ll be joined by Belmont runner-up Hot Rod Charlie, again likely to kick off his afterburners at the start.

Current Kentucky Derby-winner Medina Spirit’s status is unknown, but current Derby runner-up, Mandaloun, is likely to be there as well.

Okay, hold onto your horses, fellas. While the early Classic rankings are dominated by males, there are a few ladies who hope to spoil the boys’ night out.

Wunderkind Letruska has become something of a wonder. The five-year-old Super Saver mare (out of Magic Appeal by Successful Appeal) started the year under the radar, with most of her previous graded success in Mexico, where she reigned as that country’s three-year-old champion.

She came north and nosed out reigning Eclipse Award Champion Older Female Monomoy Girl in the Apple Blossom at Oaklawn on Apr. 16 in what some thought to be a one-off. But the Fausto Gutierrez-trainee put away Bonny South and highly regarded Shedaresthedevil by three lengths in the Ogden Phipps (G1) on the Jun. 5 Belmont Stakes undercard.

In Saturday’s Fleur de Lis Stakes (G2), it was Letruska’s five rivals who were under the radar as the rising star cruised to a five-length win on the Churchill Downs dirt. She secured an all-expense-paid berth in the “Win and You’re In” Nov. 6 Breeders’ Cup Distaff.

After three graded wins over small-but-quality fields by increasing margins, Letruska’s connections haven’t ruled out the possibility of challenging in the Classic.

Like last year’s femme phenom, Swiss Skydiver, Letruska seems on the cusp of laying claim to this year’s Eclipse Award as Champion Older Female. A Classic win would also put her firmly in competition for Eclipse Award Horse of the Year honors.

“We know she’s a really nice dirt horse,” Gutierrez told reporters after her 5 3/4-length Fleur de Lis romp. “But she is supposed to win at different racetracks and different conditions for a possible Horse of the Year campaign.” The trainer went on to acknowledge a Classic start is a possibility.

Her next likely start is the prestigious Personal Ensign (G1) for three-year-olds and older Aug. 28 at Saratoga. She’s likely to face stiff competition as the 1 1/8-mile contest also awards a “Win and You’re In” Breeders’ Cup Distaff berth.

Speaking of Swiss Skydiver, last year’s Preakness winner seems more likely to seek a berth in the Distaff. After winning the Beholder Mile (G1) Mar. 13 at Santa Anita, she regressed to a third-place finish in the Apple Blossom. The Ken McPeek-trained daughter of Daredevil (out of Expo Gold by Johannesburg) does seem to relish the shorter distance, so a go at the Personal Ensign may be in line for her.

The four-year-old has won seven of her 14 starts, but has run well enough to place (3) and show (2) in five others. McPeek has been known to chat up his horses to owners for sterner tests. This could be her last year on the track, so it would not be too surprising to see Swiss Skydiver leap into the 14-horse Classic-fray field.

And then there’s Monomoy Girl.

She grazed out during all of 2019 with minor injuries, but returned to the track in 2020 for what many thought would be her last year racing with unknown results.

Considered one of the all-time greats, she returned with a vengeance, going three-for-three on the year. She won the Ruffian Stakes (G2) at Belmont, then the La Troienne (G1) at Churchill Downs before her legacy-securing win in the Nov. 7 Breeders’ Cup Distaff.

The day after her Nov. 7 Breeders’ Cup Distaff win, she was sold for an eye-popping $9.5 million to Spendthrift Farm at the Keeneland Fasig-Tipton mixed sale. It was thought she would be retired and begin a second life as a broodmare. But her new owners surprised the racing world by announcing she would remain in Brad Cox’s charge to train and race another year.

Beyond that, microshares in her racing year were made available to fans through Myracehorse.com. That venture also teamed with Spendthrift owner B. Wayne Hughes to sell microshares in the racing and breeding career of 2020 Kentucky Derby, Breeders’ Cup Classic, and Eclipse Award Champion Horse of the Year, Authentic.

“She’s a superstar, she’s an all-timer,” said Spendthrift general manager Ned Toffey at the time of the sale. “She’ll go back to Brad Cox, and that’s the plan right now. We’ll let her decide [whether to continue racing]. She appears to be very sound, the vet checked her out, everything looks good. She’ll go back in training another year, and then we’ve got a stallion or two that might suit.”

Now a six-year-old, Monomoy Girl began her likely last year on the track with a warmup victory in the Bayakoa Stakes (G3) on Feb. 28 at Oaklawn. Favored in the Apple Blossom at the same track, the 2018 Eclipse Award Champion Three-Year-Old Filly, 2020 Breeders’ Cup Distaff winner, and Eclipse Award Champion Older Female was surprised by the mere nose of Letruska—and a great ride by Irad Ortiz Jr.—in that race.

The Tapizar mare (out of Drumette by Henny Hughes) still sports a gaudy 17:14-3-0 record, with one of those losses a controversial disqualification from first to second for interference in the 2018 Cotillion Stakes at Parx, the other two by only a head and a nose.

You haven’t heard from Monomoy Girl lately because she’s resting again. Following the Apple Blossom, veterinarians discovered some heat in her gluteal (rump) muscles and hamstrings. It was decided to send her home to Spendthrift for a little summer grazing R & R as well as some time on the Aquatred.

Under the care of Dr. Wes Sutter, a mid-June examination revealed the hot spots have healed. He prescribed two more weeks of Aquatred therapy followed by a re-evaluation, currently in progress. If that is favorable, Monomoy Girl is expected to return to training.

There is no target race yet in sight, but the clear end goal of her 2021 return has always seemed to be the Breeders’ Cup Classic.

The Breeders’ Cup organizers have already announced this year’s two-day meet at Del Mar—“Where the Turf Meets the Surf”—will be open to full attendance.

During all of 2020 and much of 2021, the COVID-19 pandemic has dominated the daily news worldwide. Fans of horses and of racing are hoping that the headlines on Nov. 6-7 will be dominated by the pandemonium aroused by swift horses, gallant riders, and worthy winners of the 2021 Breeders’ Cup.