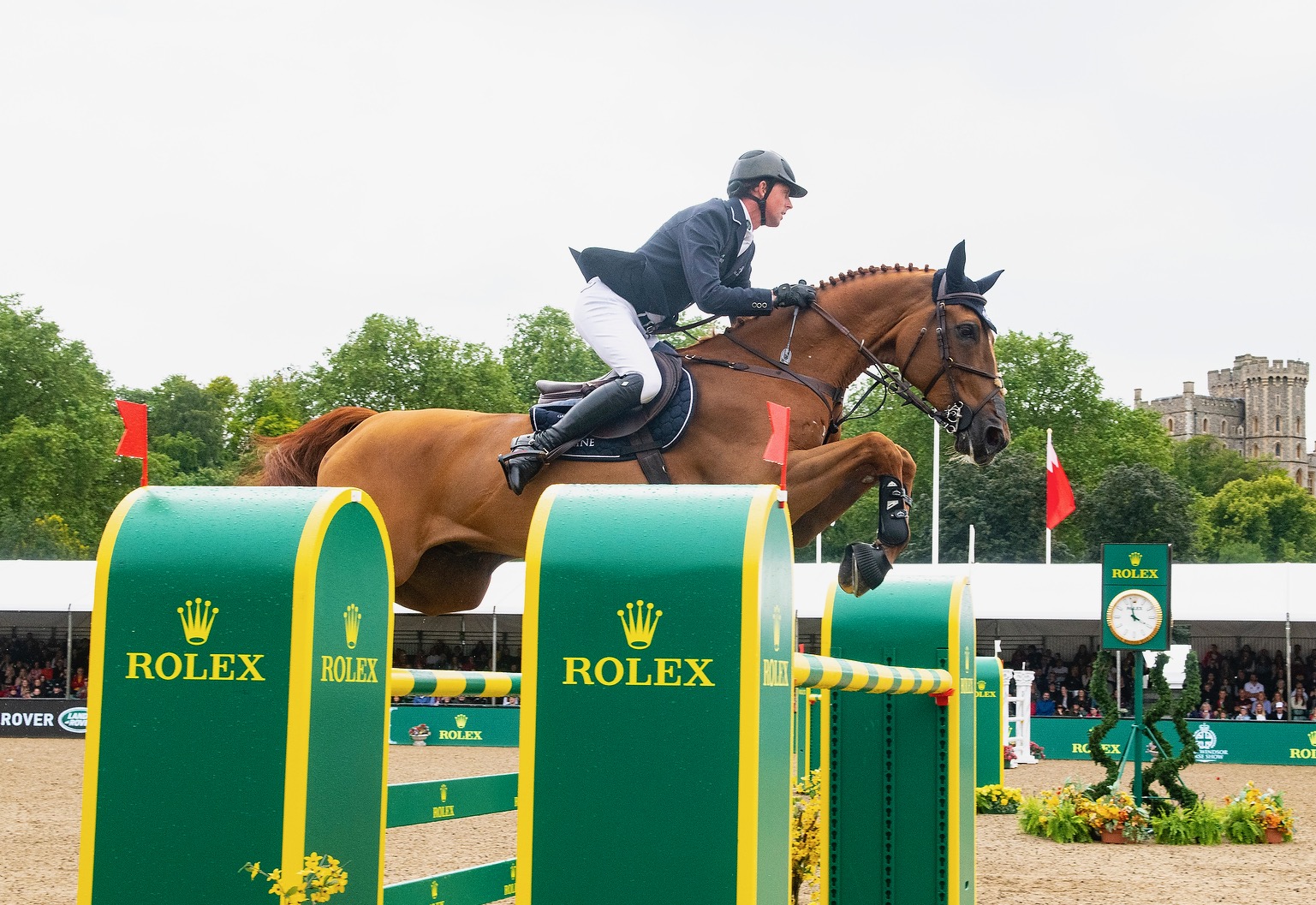 Brought to you by AIG Private Client Group: “We share your passions…and we’ll help you protect them.”

The CSI5* Rolex Grand Prix at Royal Windsor was full of surprises—that is, except for the winners, Ben Maher and Explosion W.

Maher and the 12-year-old KWPN gelding (Chacco-Blue x Baloubet du Rouet) faced a 10-horse jump-off Sunday in one of the most prestigious grand prix events in the sport, as evidenced by a field that included four of the World’s top five ranked riders.

Yet, Maher and Explosion smoked them all, shedding nearly two seconds off the time of the then-leading Martin Fuchs (SUI) and the spectacular Clooney before holding off World No. 2 Steve Guerdat (SUI) and Venard de Cerisy. The winning pair crossed the timers of Bernal Costa Cabral’s short course in a remarkable 35.16 seconds. Guerdat and Vendard de Cerisy’s 36.92-second time earned them runner-up honors, with Fuchs and Clooney ultimately settling for third (35.92 seconds).

“Explosion is a great horse. He makes my life very easy,” said Maher, who with Explosion is the world’s top rated combination in jumping, according to the FEI. “I took quite a lot of chances with the first three jumps in the jump-off, and then the rest went to plan. It went my way [today], and some of the best riders in the world are here. I’m very lucky to ride a horse like this.”

A stacked jump-off of 10 came really down to the first line, where Maher and Explosion executed a leave-out that no one else could, galloping down to the Rolex oxer in eight strides. It was another galloping distance into a careful vertical-oxer combination before Explosion appeared more workmanlike, with his massive stride and quickness on takeoff and landing setting him apart.

Guerdat and his mount gave superb chase, making up significant ground in the penultimate line. But they were ultimately a stride off the pace of the winning combination.

“There was the option of the eight strides—one less than everybody else—to the second fence,” Maher explained. “It was a real gallop, which I thought, if it would come up, I’d continue on. How he jumped that jump, I don’t know. His legs go everywhere.

“I saw a quick one into the double that was a little long,” he continued. “I don’t know how—he’s just a different league of horse, how he does that.”

It was also a different league of a lineup, and Costa Cabral may have had some early nerves, as the first three combinations into the arena executed clear rounds.

The class leveled out after that, and a particularly tight time allowed of 73 seconds played a significant factor in keeping the jump-off at a manageable size. A wave of shock went over the crowd as Kent Farrington (USA) and Gazelle kept all the jumps up but finished on a time penalty. Jack Whitaker did everything right aboard Scenletha but crossed the timers just .01 seconds over the mark.

“There were a lot of good riders here today,” Maher said. “The course wasn’t as big as perhaps some of us had expected. There were quite a few clears.”

The event marked the last for many combinations before heading to Tokyo for the upcoming Olympic Games, postponed a year as a result of the ongoing global pandemic. Maher and Explosion will represent Great Britain on their three-person squad, along with Scott Brash and Hello Jefferson and Holly Smith and Denver. All three riders, along with Traveling Reserve Harry Charles, competed at Royal Windsor throughout the week, giving the patient and the appreciative fans—after a year without top sport in their backyards—much to cheer for.

“I’m very happy,” Maher said. “It’s our last time out before we go to Tokyo. We’ll take a little bit of time now to slow down and prepare.

“It’s great to have crowds back here in Windsor,” he added. “This hasn’t been a great show for me in the past, but I think I got rid of that thing over my head here today. It gives me a lot of confidence.”