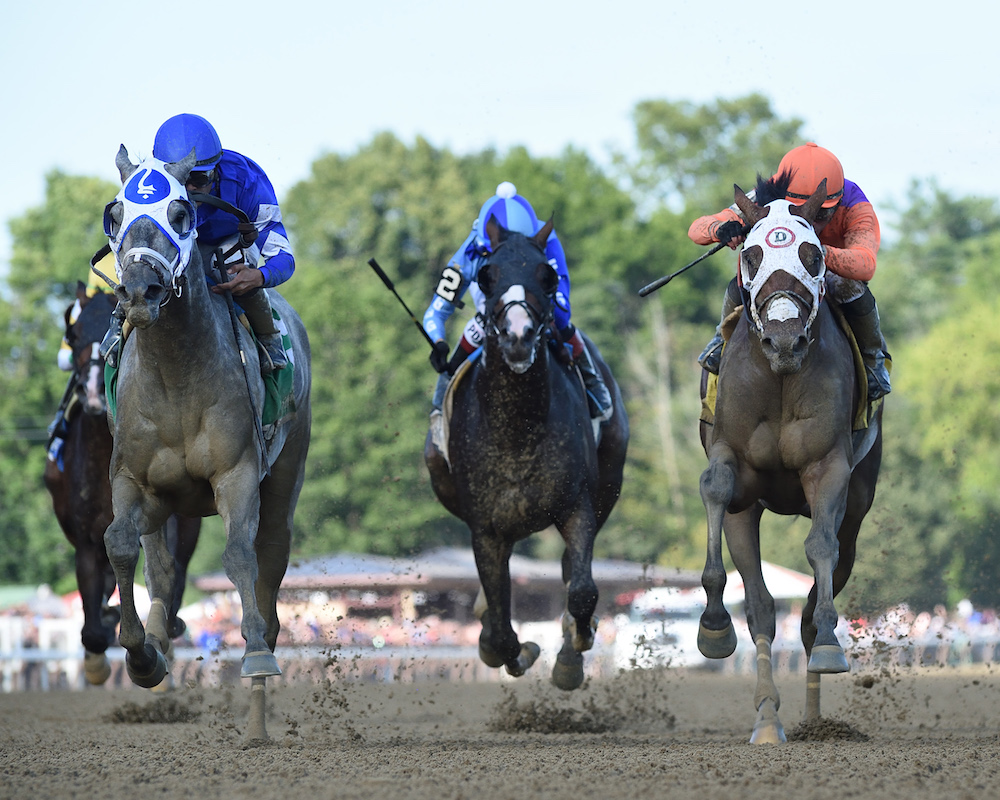 Carrying heavy weight and perhaps his connections’ heavy hearts from Friday’s passing of former Godolphin stablemate Bernardini, heavy-favorite Essential Quality powered to the top of the three-year-old Thoroughbred class with a half-length win in the $600,000 Jim Dandy Stakes (G2) at Saratoga in what is fast becoming his typical narrow stalking win fashion.

It was a small field that took to a fast track on a sunny day, only five, but one with quality and the potential for upset of the son of Tapit, racing with a bullseye on his muscular hindquarters at The Spa’s fabled Graveyard Of Champions .

There was Dr. Jack on the rail, Todd Pletcher trained and a son of the late Pioneer of the Nile, sire of 2015 Triple Crown and Breeders’ Cup Classic winner American Pharoah.

Masqueparade was the winner of the June 26 Ohio Derby at Thistledown and the Albert Stall-trained son of Upstart was the appropriately named choice of many forecasting the upset.

Weyburn was a second son of Pioneer Of The Nile entered in the race. First in the Gotham (G3) at Aqueduct and second in the Pegasus Stakes at Monmouth on Jun. 13, he was being guided by Irad Ortiz, Jr., the reigning consecutive three-time Eclipse Award winning jockey.

Aside the favorite was Robertino Diodoro-trained Keepmeinmind. A son of Laoban, he had won only once in 10 starts, the Jockey Club Stakes (G2) at Churchill Downs as a two-year-old. Still, he consistently placed and showed at Keeneland, KY and Thistledown, OH and ran perhaps his best race, closing fourth from far behind in this year’s Preakness (G1) at Pimlico.

Keepmeinmind was thought to be sitting on a  big race. He was.

Dr. Jack broke from the rail as expected, the pacesetter. He maintained that position through the backstretch, challenged by Weyburn.

Around the far turn, Essential Quality, running very wide throughout, moved to challenge for the lead. Keepmeinmind had established position near the rail and the two battled through the stretch with Essential Quality taking the lead and finishing with a half-length win under jockey Luis Saez.

The stretch run was reminiscent of Essential Quality’s Jun. 5 Belmont Stakes length-and-a-quarter victory over Hot Rod Charlie, stalking and wearing down his prime opponent in the stretch.

“We had a horse slip up inside him [Keepmeinmind] that looked like he had some run left, so it made for some anxious moments down the lane,” said trainer Brad Cox. “But he [Essential Quality] was very determined and had the heart of a champion. He’s able to dig in and fight and move on.”

“The really good horses, they just show up and find a way to get things done and he has seemed to have done that for nearly every start,” said Jimmy Bell, president of Godolphin USA after the race. “This was a hard-fought race. Obviously, he was a little wide, but he found a way and overcame what he needed to do to get the job done and that’s the mark of a really good horse. When things aren’t always your way, they find a way.”

Recalling Bernardini, Essential Quality’s path going forward is likely to be identical, with chief Three-Year-Old  Eclipse Award rival candidate Mandaloun, the Risen Star (G2), Pegasus Stakes, current Kentucky Derby runner-up, and Haskell (G1) winner likely in the gate for the second of what could be four head-to-head meetings in the Aug. 28 Travers Stakes (G1) at Saratoga.

Following the Travers comes the Jockey Club Gold Cup (G1), especially popular with horses seeking to qualify for the Breeders’ Cup Classic (G1), where Eclipse Award Champion Three-Year-Old and Eclipse Award Champion Horse of the Year could be decided. That race will be moved for the first time to the closing weekend at Saratoga and run on Sept. 4.