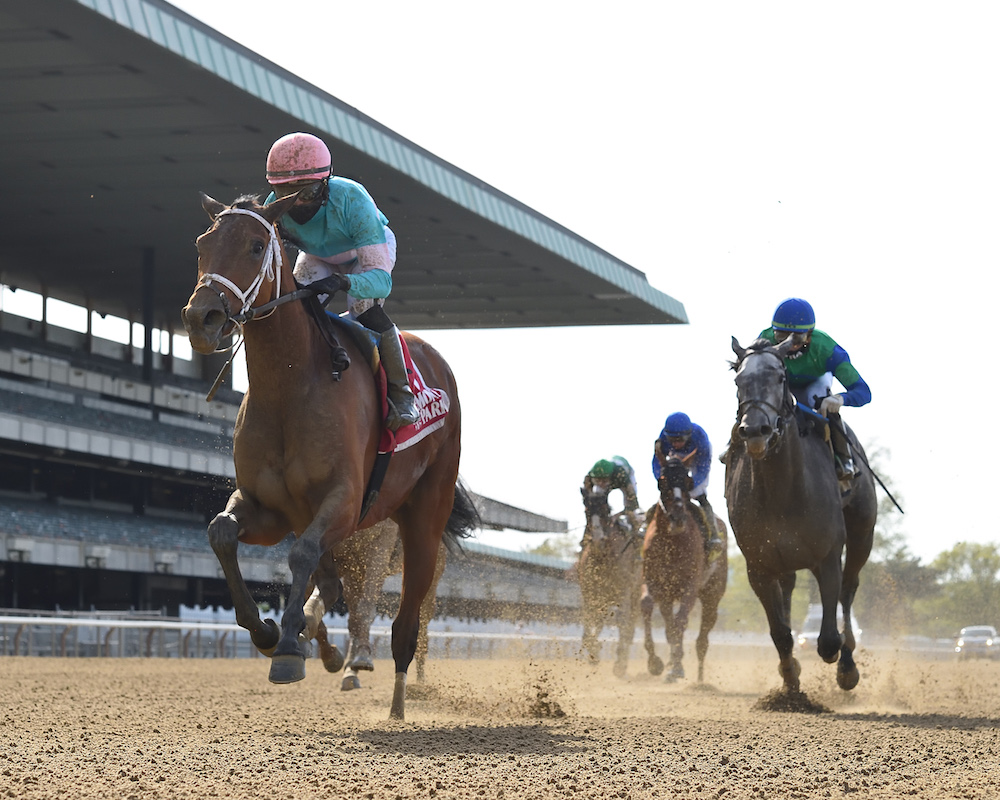 With the Preakness (G1) in the rear-view mirror and the Kentucky Derby still to be decided, Saturday’s 153rd Belmont Stakes (G1), the “Test of Champions,” will test only eight entries over the mile-and-a-half dirt track known as Big Sandy in Elmont, NY.

That year, Bob Baffert was a huge presence as the trainer who guided American Pharoah to history. Baffert looms as an equally huge presence this Belmont Saturday…by his absence. More about that later. For now let’s stay with the contenders who will be in the gates.

Kentucky Derby favorite Essential Quality skipped the Preakness, but has bettors overlooking his bad-luck Derby start, and for now length-short fourth-place finish, to return as the 2-1 Morning Line favorite leaving from gate #2.

Alongside him in gate #3 will be surprise Preakness winner Rombauer, the Belmont second choice at 3-1. One unusual twist? John Velazquez picks up the mount on the Triple Crown Classic winner after jockey Flavien Prat, Rombauer’s Preakness pilot, chose to honor a previous commitment to guide 7-2 third choice Hot Rod Charlie, motoring out of gate #4.

Rock Your World, whose world was rocked after being collided into by Highly Motivated at the start of the Derby, leaves at 9-2 from the #7 post. Known Agenda at 6-1 in post #6 completes the betting favorites.

Longshots include Bourbonic, departing from the rail at 15-1, Overtook who few are taking over at 20-1 on the outside #8 post, and—back again—30-1 Japanese invader France Go De Ina, the horse that challenged Rombauer on the Pimlico backstretch before falling far short. His extra incentive is an extra $1 million that’s offered for any Japanese horse to win a Triple Crown race this year.

Counterintuitive though it may seem, Bourbonic on the rail drew the Belmont’s treasured post position. A total of 24 horses have won the Belmont from that rail post in a long race that features a deep dirt surface, wide turns and a long stretch run. Another 15 horses have won from posts #3 (Rombauer) and #5 (France Go de Ina). Post #7 (Rock Your World) claims 14 winners. Post #2 (Essential Quality) gated 12 winners. Ten winners have left from post  #4 (Hot Rod Charlie). Post #8 (Overtook) and #6 (Known Agenda) claim seven and eight winners respectively.

Baffert has claimed the horse was given a topical application of the medication to relieve dermatitis on Medina Spirit’s right hind quarter. Earlier this week, the split-sample blood test requested by Medina Spirit’s connections confirmed the presence of the raceday-banned medication.

Churchill Downs earlier this week suspended Baffert from stabling and race entry for two years at all of the tracks it owns. In addition to Louisville’s Churchill Downs, the suspension includes Arlington Park outside Chicago, New Orleans’s Fair Grounds and Pennsylvania’s Presque Isle Downs among others. The outcome of the Kentucky Derby is in the hands of the Kentucky Horse Racing Commission, which is conducting its own inquiry.

Among the undercard featured is the Metropolitan Handicap (G1), the “Met Mile” which will see Brad Cox trainee Knicks Go go against five other older horses. The 6-5 favorite, a five-year-old son of 2012 Belmont Stakes runner-up Paynter, will leave outside post #6. Among the competitors will be 7-2 second choice Silver State in post #3, Dr. Post in post #2 and 10-1 longshot By My Standards, carrying his standard from post #5.