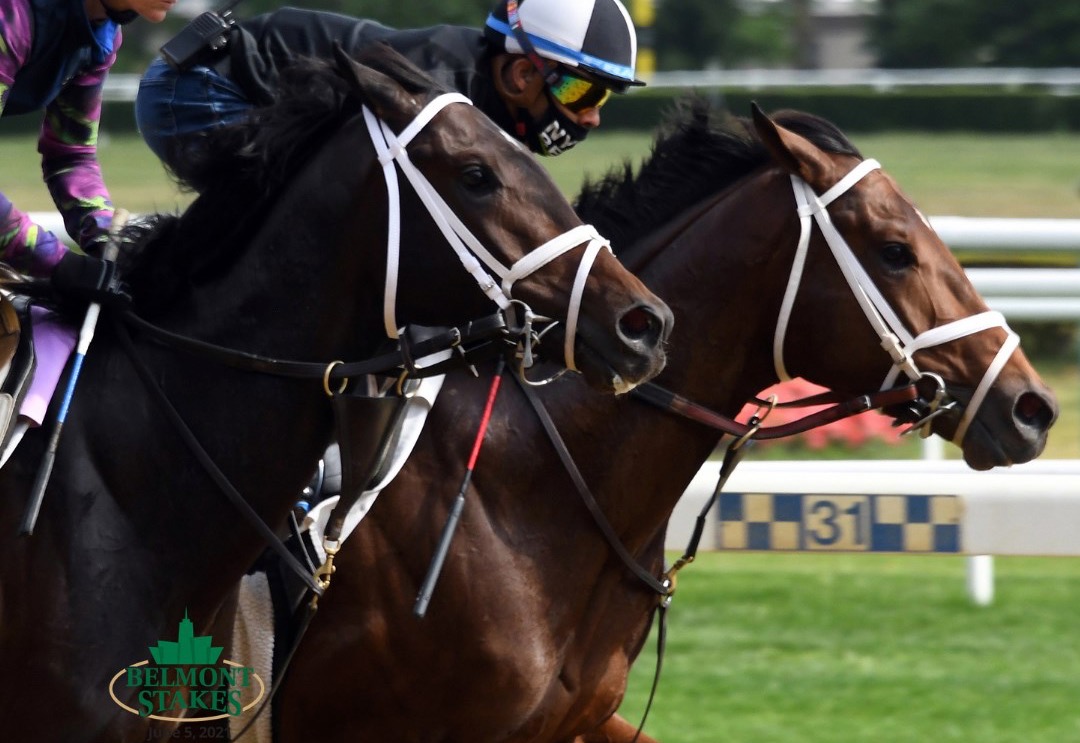 Okay, so in the Belmont Stakes (G1), Irad Ortiz, Jr. is out and off Known Agenda after a Thursday spill, Flavien Prat moved over from his Preakness-winning ride Rombauer to honor a previous commitment to guide Hot Rod Charlie, John Velazquez picks up Rombauer for trainer Michael McCarthy, Swiss Skydiver and Valiance both have been scratched from the Ogden Phipps (G1).

Those surprises have been stealing the headlines during Belmont Stakes week—we’ll avoid the Bob Baffert, Medina Spirit thing (for now)—so maybe it’s a proper time to give some props to an under-the-radar horse that, in an eight-horse Belmont field, could still get over the finish line first.

Also Rock Your World, 17th in the Kentucky Derby (G1) after being whacked out of the gate by Highly Motivated, obviously highly motivated to rock his world.

There’s 30-1 longest shot France Go De Ina, the Japanese invader who failed to successfully challenge Rombauer in the Preakness (G1) backstretch, but stands to pick up the cool $1 million bonus awarded to a Japanese horse for a win. Hey, but you might win that in a drawing in Colorado, Ohio or Washington states just for getting a COVID-19 vaccine—and you don’t have to run a mile-and-a half to win it!

Bourbonic’s on the rail and Belmont history gives him the best chance to win since 24 former Belmont victors have come from that most-winning post, so we’ll put down the glass on him.

…and then there’s Overtook at 20-1, starting from the far outside #8 post.

Overtook’s been overtaken in all the headlines and discussion by all the other stuff we just mentioned. So this may be his one chance to get some attention. And why not? And with that name? After all, Onion brought tears to the eyes of Secretariat fans in the 1973 Whitney Stakes at Saratoga. Upset overturned Man o’ War in the 1919 Sanford Stakes, also at “The Graveyard of Champions.” Okay, so Saratoga isn’t Belmont and it’s a couple hours up the road on I-87. Like the horse knows that.

Anyway, here’s Overtook’s 15 minutes of fame—for those who think it may take him that long to finish the race.

Now, you’ve probably never heard of Overtook. But have you heard of Curlin? Yep, that’s his dad. Got Lucky is his mom—we’ll avoid the obvious pun here. Her dad was super sire A.P. Indy. So winning is in his jeans genes.

Kentucky bred by Hill ‘N’ Dale and Philip J. Steinberg, Overtook was an early foal (Feb. 6) in 2018, so he has a bit more meat over the bone than many of his possibly overrated Belmont competitors.

His owners are a syndicate: Repole and St. Elias Stables, Michael Tabor, Mrs. John Magnier (yeah, the spouse of that John Magnier of Ireland’s Coolmore) and Derrick Smith. They all thought enough of him to get together and break their collective piggy banks for an over-the-top (you’ll have to get over hearing a lot of those ‘over’ puns) $1 million at the 2019 September Keeneland Yearling sale.

If you don’t know of Overtook, it’s probably because he’s been based in New York, where headlines the past year have not been all that pleasant. He’s saddled by seven time Eclipse Award-winning Trainer Todd Pletcher, who also has claimed two time Kentucky Derbys (Super Saver, 2010; Always Dreaming, 2017) and three Belmont Stakes (Rags To Riches, 2007; Palace Malice, 2013; and Tapwrit, 2017).

Recently inducted into the National Museum of Racing and Hall of Fame, Pletcher will also saddle Bourbonic and Known Agenda for the Belmont.

“It goes without saying that he was well-thought of as a yearling,” recalls Pletcher of Overtook. “He was expensive. He has a big-time pedigree.”

For a three-year-old, he’s been fairly lightly raced, only five starts. But at 1-1-2, he’s shown some success. He was second in the Withers Stakes (G3) at Aqueduct, a nine-furlong dirt race that’s a year older than the Kentucky Derby, and third at the same distance and surface in the Peter Pan Stakes (G3) at Belmont.

The Withers is a Kentucky Derby prep and, though he never made it into the field of “The Run for the Roses,” a blanket of carnations would help overcome that disappointment.

He’s moving way up in class and distance, but his pedigree suggests he’s bred for the distance. Hey, no class? He’s a ‘Yorker who knows Big Sandy. No disrespect!

Manny Franco gets the ride. He won last year’s COVID-altered Belmont on Tiz The Law. Manny was atop this year’s spring/summer meet jockey leaderboard at Belmont, but was recently overtaken (ugh) by Irad Ortiz, Jr., off Known Agenda later today after his Thursday injury (get well, Irad!). He has an 18 percent strike rate (that’s wins) so far this year, so Franco’s not counterfeit—you have to be of a certain age to get that one.

So what can we expect in the race. Well, Franco will hope to overcome the outside post and bring Overtook over early (okay, enough) to avoid drifting out on the wide first turn at Belmont. He’ll want to stay close to the pace likely set by Bourbonic, looking to leave early and avoid getting pinned on the rail, or Known Agenda, whose replacement rider is unknown at this writing. Essential Quality is likely to try to stalk from third position or so with Hot Rod Charlie right there.

Any one of those: Essential Quality, Known Agenda, Bourbonic or Hot Rod Charlie could cross the wire first in what is likely to be an exciting contest among relative equals.

Or perhaps Overtook can overcome under-estimations and over perform.

That would be over the top!