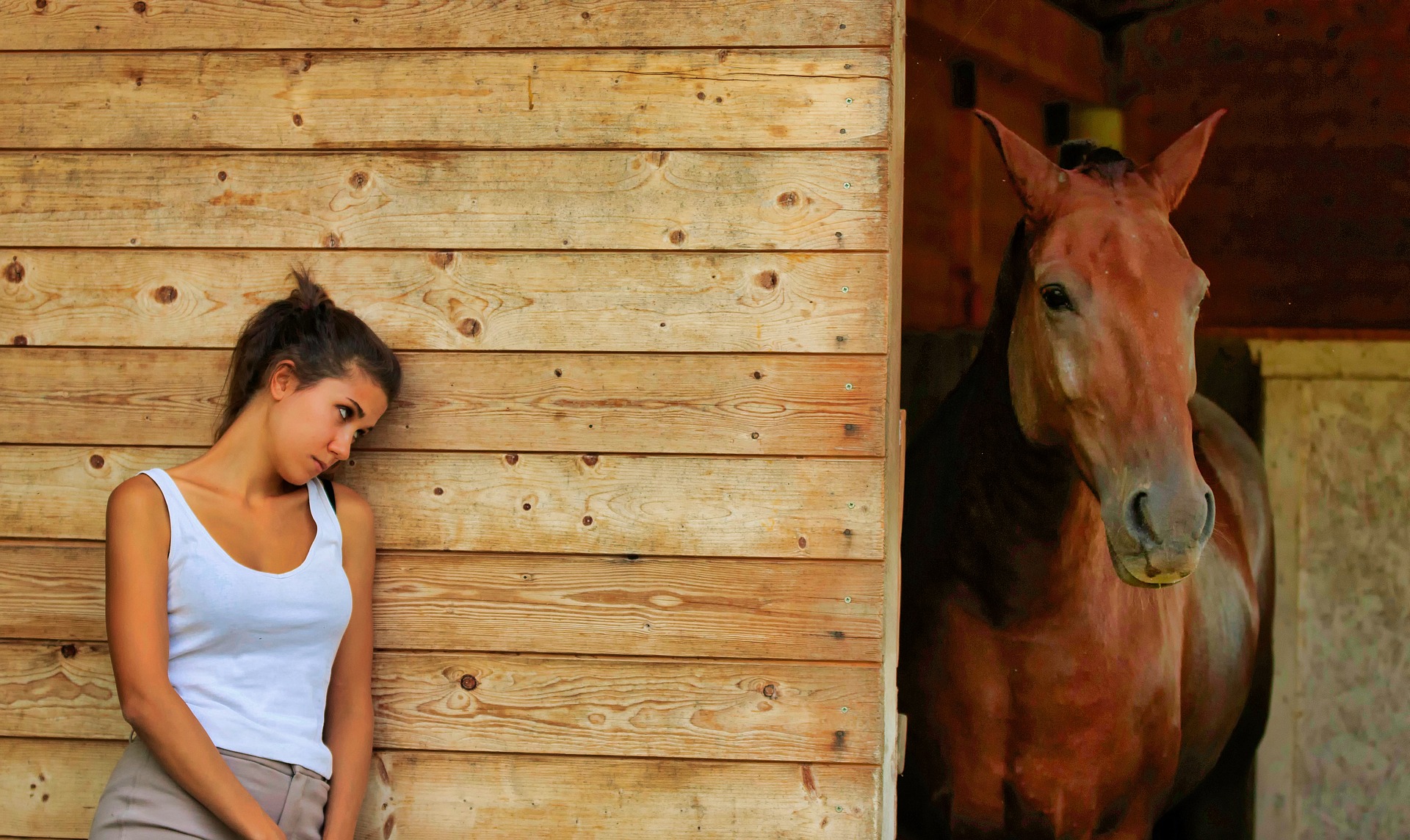 My biggest fear around horses was never falling off—it was getting trapped.

For years, entering a box stall with a horse sent my inside screaming. Adrenaline sizzled through me the same way it would being followed by a stranger in the dark. While it has mostly gone away, there are still moments that fear grabs me around the throat when I reach for a door latch.

I came by this fear of enclosed spaces honestly. Once in my early 20s, a Warmblood pinned me to the wall with his rump while I picked out the manure around his feeder. When I was a bit older, I accidentally got between a first-time mom and her foal as I filled a water bucket. As I saw her back legs come toward my face, I lifted my knee to my elbow to protect my torso. A hoof-shaped bruise blackened my thigh for more than a month after that. I wondered how long I would have been in the hospital if she had gotten me in the chest instead.

Most equestrians can pinpoint some (often irrational) thing around the barn that scares them to pieces. Mounting blocks, cross ties, winter blankets, lunge lines, and, oh dear god, horse trailers all become harbingers of doom waiting to make us burst into tears. And of course, there are nasty falls to add to the mix. Fear in us, like in our horses, is a primal response designed to keep us safe. It is a reaction much older and more powerful than our reason.

Despite fear being completely normal, the idea of “fearlessness” is spoken about in hushed tones as if it were a gift given to the holy few. While the rest of us quake in our barn boots and spook at that same corner of the arena over and over again, the unflappable reign as gods above us.

“They are fearless,” I have heard audience members whisper to each other as they watch a rider sit a spectacular tantrum.

For a long time, I was jealous of the so-called “fearless.” I wondered what was wrong with me that I could get myself so ridiculously worked up when others rode with grace. Yet the more time I spent around horses and equestrians, I began to understand that no one, except maybe the one in a billion sociopath, is absent of fear. Like unicorns and horses that never need the vet, “fearlessness” is a myth—and a damaging one at that.

At its most benign, the concept of fearlessness glosses over hard-won skill and experience. Often what we perceive as “lacking fear” is the product of practice, dedication, and understanding. These things take tremendous effort and attributing them as merely talent or god given bravery cheapens the accomplishment.

At its worst, fearlessness is a façade for more fear. In order to appear unafraid, we try to hide it. Then we become afraid that someone will find out we have been fearful this whole time. It compounds and festers, then compounds and festers some more. Our unwillingness to talk about it makes the fear expand into something much worse.

Of course, stuffing our fear deep down and pretending it isn’t there is part of the culture outside of the barn too. A world in upheaval has our brains spinning from the uncertainty. While these things are as a terrifying as a set of hooves flying toward your face, saying they are scary is taboo or perceived as weak. Instead of letting ourselves feel totally understandable nerves, we try to not look at it. To avoid feeling fear, we reach for blame, lean on untrue absolutes, dehumanize those we don’t understand, abuse substances and even resort to cruelty. I have done all these things, most of us have.

The only way to remove the venom from our fear is by speaking its name. Admitting we are scared, and then doing the hard work to face it, is far braver and effective than pretending we are not afraid at all. It is risky of course, but it is worth it.

In the past few years I have been transparent about my issues with stalls. What I have learned through this often-excruciating vulnerability is that those who have understood my fear, also understand the fear of horses. They know how to acknowledge it, and manage it, avoiding blame and rewarding those who try. Because of them, I went into stall after stall, practicing over and over. I had setbacks and progress, but each day I step outside my comfort zone it grows a little bigger.