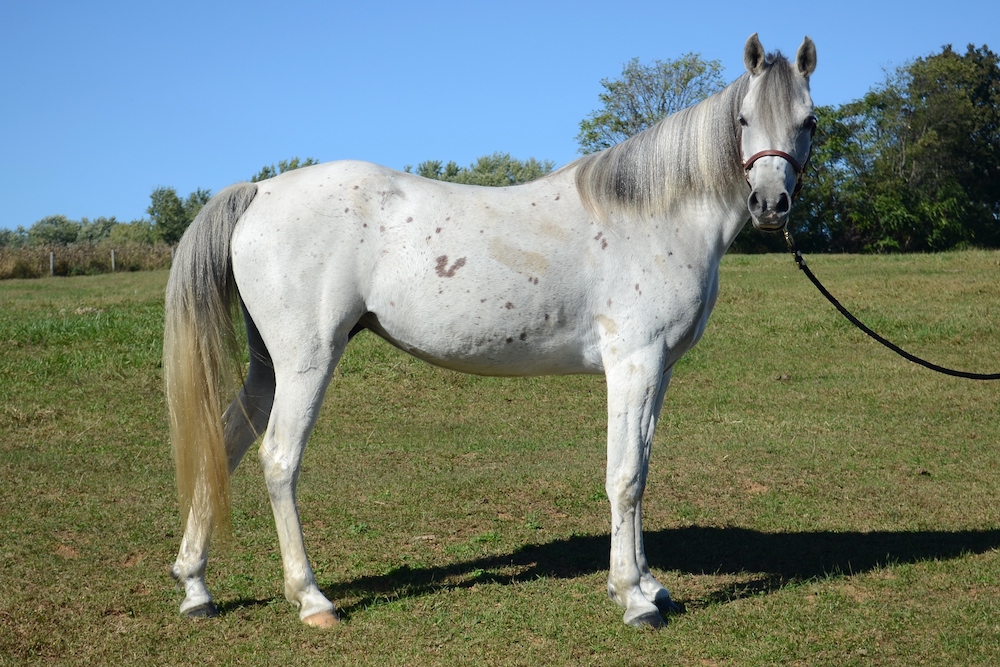 Lisbon is a 12-year-old registered Egyptian Arabian mare that arrived at Days End Farm Horse Rescue (DEFHR), Woodbine, MD, with a number of other horses as part of a seizure at a farm in Carroll County, MD, in 2017.

Lisbon’s owner had once been an attentive caretaker for his Arabian and Arabian crosses. The horses had been his primary hobby and passion and he cherished them greatly. However, after an extreme personal loss, he became incapable of caring for them.

Following this devastating hardship, the owner wasn’t able to care for himself and, in turn, the horses were left isolated in stalls for years. Although they were fed and watered, they were found standing in feet of manure that required animal control and DEFHR to dismantle the barn and dig the horses out of the stalls. The horses had matted coats and tails, suffered from hoof and dental neglect, endured varying degrees of emaciation, and all were on a downward trajectory.

Once at DEFHR, it was clear that some of the horses were past the point of rehabilitation and many had mental and emotional damage due to years of confinement. Lisbon, however, was an exception. Despite the lack of interactions and relationships with humans, she was quick to show the DEFHR staff she was willing to trust them.

Lisbon rehabilitated fully and was adopted out easily. However, Lisbon was returned to DEFHR months later when her adopter was confronted with new life circumstances that meant she wouldn’t be able to properly care for Lisbon. After being adopted out a second time, as fate would have it, she was returned again.

As an inquisitive, sensitive mare with soulful eyes and comfortable gaits, it’s hard to reconcile how this animal could be first abandoned, and then returned to DEFHR not once, but twice.

While Lisbon’s situation sounds disheartening, there is a silver lining. While the goal of many horse rescues and adoption organizations is to find one forever home for the horses, it’s no surprise that life throws us curve balls and adopters can become unable to continue proper care for the animals. By virtue of many equine adoption programs, including DEFHR, horses have a safety net—if an adopter becomes unable to provide the necessary care, horse rescues are generally equipped to take the horse back.

What’s more, rescues like DEFHR often remain in consistent communication with adopters to ensure that the adoption is going well and, if not, catch it quickly so that the situation can be remediated.

Since returning to the facility in April in stunning condition both physically and mentally, DEFHR remains committed to Lisbon’s future journey. She is back in training with DEFHR’s assistant trainer and will be attending a liberty-work horse show and a clinic in the coming months.

In Lisbon’s case, her story might have had a very different outcome had her initial owner made the difficult decision to ask for help sooner. However, horses are typically rehomed seven to ten times throughout the course of their life, so Lisbon’s story isn’t all that unusual. With horses experiencing this many transitions, DEFHR continues to educate people about the importance of speaking up when you need help caring for your horse or when you suspect a horse isn’t faring well. It’s thanks to concerned onlookers and equine rescues like DEFHR that safety nets exist and help to prevent the cycle of equine neglect and abuse.

Feature image: Despite years of neglect, Lisbon is a farm favorite thanks to her sweet and personable nature. Photo courtesy of Days End Farm Horse Rescue