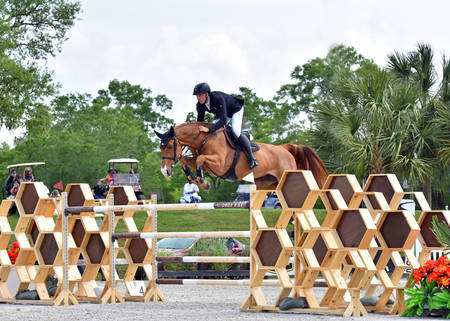 Germany’s Andre Thieme has won four of them. Collecting $1.4 million in prize money from titular HITS Grand Prix series alone, he’s the most decorated and highest earning winner in the event’s history.

Last Sunday was the latest feather in his HITS Million cap.

“I think everybody can tell by now that this class [HITS $1 Million Grand Prix] means something to me! It’s my goal every year and while I’m not giving away other classes, I definitely don’t put as much effort toward some of the other classes,” said Thieme.

“I try to really produce my horses for this class every single time. I try to be sure that everything on the day of this class goes perfect because this is the class that I really want to win each year.”

The 44-year-old has twice won the HITS Million Grand Prix in both Ocala, FL and Saugerties, NY with four different horses. He first captured the class at Saugerties in 2011 riding Aragon Rouet. In 2014, he won the Great American Million in Ocala aboard Contanga 3 and in 2017, the Saugerties Million for a second time with Conthendrix.

His record setting fourth victory was with the 11-year-old chestnut mare, Chakaria, a horse he has effusive praise for.

“Now that I’ve won this class four times, it’s just unbelievable to me. I would have never thought that it is possible, but I have a superstar horse for the first time in my life and it’s just so much easier with that kind of a horse,” enthused Thieme.

“She is fast, sound, a fighter, careful and scopey—I don’t know how to start and how to end, she’s just an amazing horse.”

The only HITS Million title to escape Thieme is the one that was previously held in Thermal, CA. That venue has since changed ownership, now the Desert International Horse Park, and is no longer on the HITS Million calendar. There is no million dollar grand prix scheduled for HITS Saugerties this year.