A Tragic End To a Dubai World Cup Day Triumph 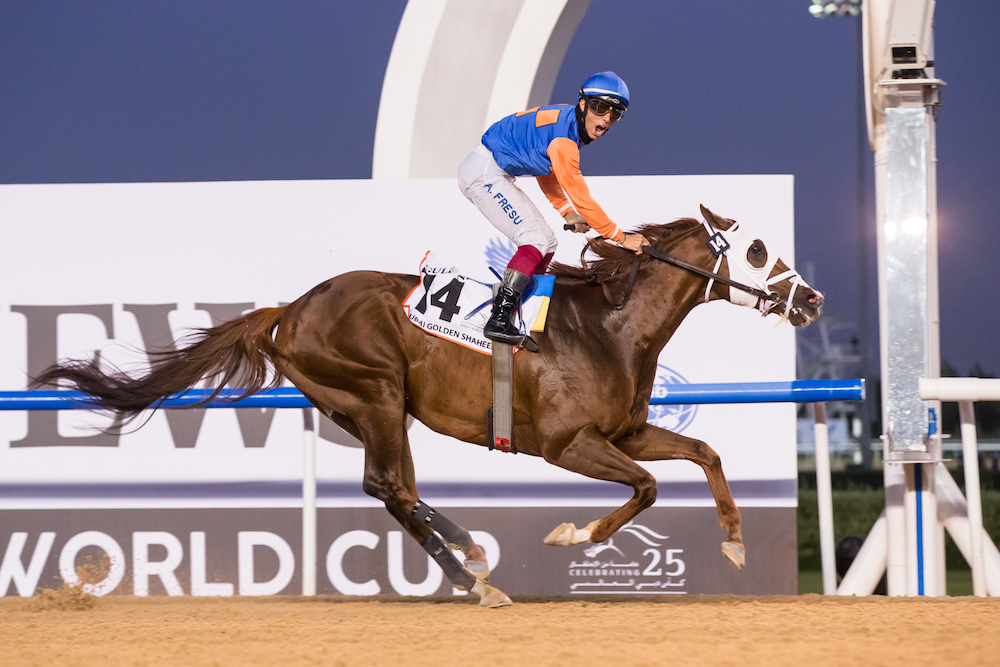 It isn’t supposed to end this way.

You win a prep race in Florida, the Feb. 13 Pelican Stakes. You’re invited to travel 8,000 miles to a new racetrack in a different country. You travel well, you eat well, you sleep well, you train well in this new and different place. It’s your first race in grade 1 company…heck, you’ve never counted a graded race among your four wins.

So, you’re supposed to lose, which just makes it easier for you to eat heartily, sleep soundly and train confidently. Because you know you can overcome all the low expectations, perhaps even win.

The odds against you are 53-1. You even get a bad draw on the far outside.

So on raceday, you simply go out and set a track record, running the race of your life…a shortened life.

That is the too-brief biography of Zenden. The five-year-old American son of Fed Biz blistered the field in 1:09.01 to set a track record in the six-furlong Dubai Golden Shaheen at Meydan Saturday, even pulling away at the close.

Shortly after his victory, something went terribly wrong. As jockey Antonio Fresu tapped him on the neck in appreciation of his effort, Zenden appeared to stumble, the jockey falling to the dirt track, then ran in obvious distress into the Meydan infield. Trailing horses luckily avoided Fresu, who walked away uninjured. Zenden was not as fortunate.

Corralled, then examined by track veterinarians, Zenden was found to have suffered a compound fracture of his left front leg. The injury was deemed catastrophic and the horse was humanely euthanized with trainer Carlos David at his side.

Neither David nor Fresu were quoted about the incident in the official press releases from Meydan following the race, though the trainer was reportedly “devastated” at the loss of his horse.

Trainer David traveled to Dubai to saddle Zenden, his first grade 1 winner. The Colombian native started his horseman’s career for Hall of Fame trainer Bill Mott as a hotwalker, groom, then exercise rider after learning to ride at jockey school.

David’s tragic triumph in the Golden Shaheen will enhance the trainer’s earnings and strike rate gains, but it can’t diminish his loss.

The loss of Zenden may not be David’s only challenge. He had the misfortune of working for Jason Servis as an assistant for several years, this well before the disgraced trainer became the focus of a Federal doping scandal in the U.S.

Servis was one of 27 individuals indicted last year on charges ranging from conspiracy to manufacture, distribute and administer questionable performance-enhancing drugs to mail and wire fraud.

Though now a respected trainer in his own right, the taint of association with Servis remains with David and some individuals were quick to seize on it in social media posts following Zenden’s catastrophic injury.

Zenden’s owners are remaining in Dubai to await the result of a necropsy on the horse. David was said to be returning home Saturday night. He’ll bring home a trophy and his share of the winner’s purse.

But sadly, Carlos David will be leaving Dubai with far less than he came with.