Hall of Fame Thursday: Peter Doubleday on the Big Three 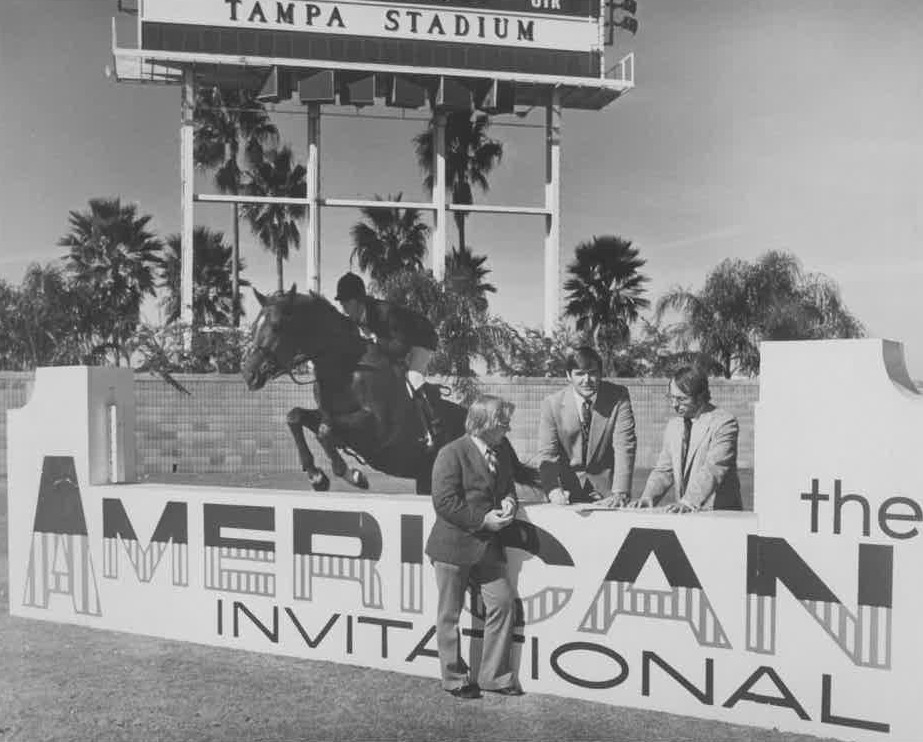 Back in the day on the Grand Prix Show Jumping Circuit there were three very distinctive and important big money events.

We are talking the 1970s and ’80s. Known as the first “Triple Crown of Show Jumping,” the American Invitational, American Gold Cup and American Jumping Derby (later the International Jumping Derby) stood out in an already crowded jumping schedule. All three used “American” in their title and two were created by Hall of Famers and the third by a potential future Hall of Famer.

All three were designed to attract spectators and help make the sport “special.” They were the foundation of the American Grandprix Association (AGA) tour, which consisted of a circuit of about 20 stops nationwide with year-end Rider-, Horse- and Rookie-of-the-Year honors presented.

The American Invitational served as a grand finale for what was the original Sunshine Circuit in Florida that morphed into the current Winter Equestrian Festival. Traditionally held in late March or early April, the Invitational’s producer, Eugene R. Mische, envisioned a large stage for his event and Tampa Stadium, home of the NFL’s Tampa Bay Buccaneers, became the place to be on a Saturday night at the end of the circuit. Later in its history, a new football stadium was built next door and named Raymond James Stadium.

The Invitational drew up to 15–20,000 fans and was the first real showcase of the sport in the U.S. Horse-and-rider combinations were at the top of their game negotiating jumps specially built for the event with world famous Show Jumping Hall of Famer Pamela Carruthers designing the test for the first 10 years. With the incredible atmosphere of the large football stadium added into the mix, the Invitational was an event like no other. The first Invitational was won by the great Thoroughbred Idle Dice and Virginian Rodney Jenkins, both Hall of Famers. The purse was $15,000—a lot of money for that time. There was no entry fee.

The backdrop of the Invitational also attracted network TV—Bud Sports in particular, and their production made it to ESPN on numerous occasions. In 1986, CBS televised the event. A few other distinctions set it apart—it was the first Grand Prix held under the lights, the longest running stadium event in Tampa Bay history, and Anheuser-Busch was the major sponsor for most of its life.

The American Gold Cup has had six homes—1970 in Chagrin Falls, OH; 1971–72 in Tampa, FL; 1973–79 in JFK Stadium in Philadelphia; 1980–2005 in Devon, PA; back to Chagrin Falls, OH in 2006; with more recent stops in North Salem, NY and Traverse City, MI. This event was created by three Hall of Famers: D. Jerry Baker, Leonard A. King, Jr. and Harry R. Gill. Their vision was to offer a show jumping event with a dynamic name, a massive antique trophy, big money, and for many years, a different format of two rounds and a jump-off. At one time there was a Friday qualifier for Sunday’s big contest.

The Gold Cup was always contested in mid-September. Co-founder Jerry Baker designed the course for the first five years and again utilized a unique set of jumps provided by Steve Stephens’s jump building company out of Florida. A purse of $15,000 was offered and the combination of Act I and Hall of Famer Conrad Homfeld bested the field of 30. Leading rider and horse titles accompanied the Sunday victory celebration each year as well. The Germantown Hospital and Medical Center in Philadelphia served as its beneficiary for many years.

The brainchild of USET Eventing rider Mason Phelps, the American Jumping Derby was created in 1976 at Phelps’s Glen Farm in Newport, RI and staged in late September. The vision here was to provide the American show jumping scene a look at a unique test from Europe. Derbies had been a mainstay at major shows in Germany, Ireland, Great Britain and France just to name a few.

The use of natural obstacles (a Derby bank, grob, table bank and ditches) as part of a course of 18–20 obstacles and twice the length of a normal Grand Prix course provided a “different” look at the sport. Imagine attending a college football game in late September where the weather is cold and rainy, the leaves are turning and the wind is howling and you could be attending the Derby—truly another event like no other.

The format was a time first jump-off formula and one unique part of the Derby was that the course remained the same each year. Six-time Olympian and Hall of Famer Frank Chapot designed the course that featured 26 efforts with a time allowed of three minutes and 35 seconds. Through the years this ultimate test produced very few clear rounds; in fact, two of the first six years produced a winner without a jump-off! Horses and riders had to be fit for the Derby.

In its first year (1976), Bernie Traurig and Singapore emerged victorious over a field of 26. In 1980, a new name was adopted—The International Jumping Derby. In 1986, the Derby was the richest event on the circuit serving up $50,000 in prize money, again, very significant for that time. The week in Rhode Island was also very much a social week, a fun horse show with a limited schedule and a grand finale on Sunday in all kinds of weather. Truly an unforgettable experience.

On a personal note: having been a part of all three events as the “Voice,” one small episode stands out and it was from the Derby. One year the Derby’s September dates conflicted with my schedule of an event in Vancouver, BC, Canada. With the endorsement from the Derby’s main man, Mason Phelps, I was granted the opportunity to announce both as long as I made it back to the Derby for Sunday’s main event. This task was accomplished with the help of the Leone brothers, Mark and Peter, who were competing in BC with other horses awaiting them in Rhode Island for the Derby. On a Saturday night, after the Grand Prix in Vancouver, we flew commercially all night to Toronto where they had their private plane awaiting. We arrived in Newport around 9:30 a.m. and I took to the announcer’s stand and they hopped on their horses. (I think my performance that day was a bit better than their ride on the big field!)

Known to many as “The Voice,” Peter Doubleday was show announcer for 30 or more horse shows a year, and on show jumping telecasts on ESPN, Outdoor Life Network (OLN) and Canada’s TSN—his voice has been heard by millions over the years! He also served as manager of many of the nation’s top horse shows, including the Pennsylvania National Horse Show, Devon Horse Show, the National Horse Show, and the Royal Horse Show as well as coordinated production of the Show Jumping World Championships at the 2010 FEI World Equestrian Games in Kentucky.

Feature image: Steve Stephens jumps the American Invitational jump in a promotional event at Tampa Stadium before the big event. Photo courtesy of the Show Jumping Hall of Fame.