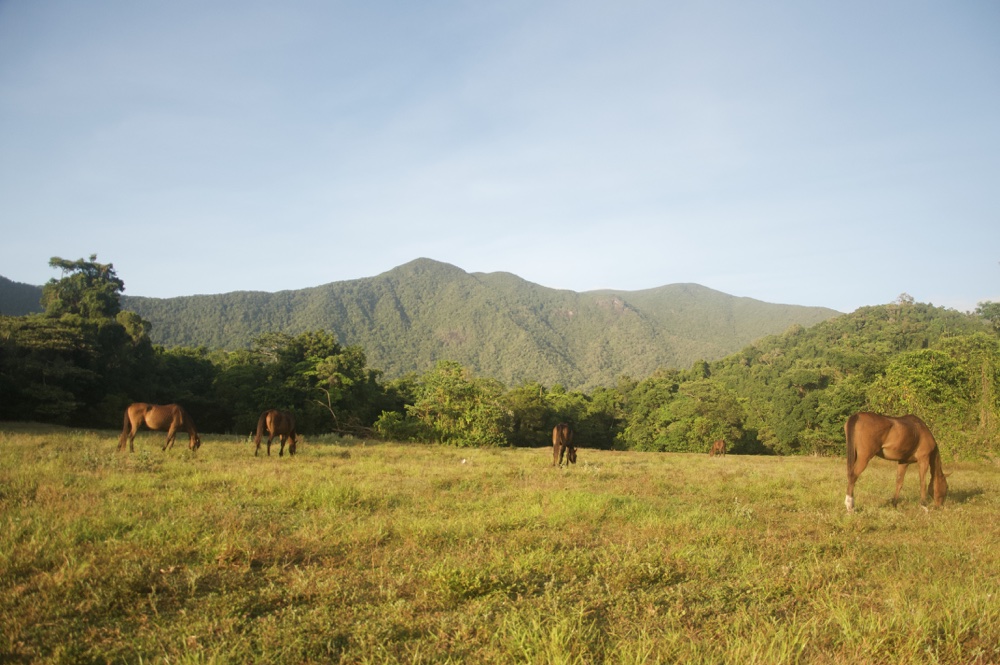 As Jerry stepped carefully over coconuts fallen across the trail, it hit me that you honestly never know where horses are going to take you.

In the past, my ability to ride had gotten me jobs as a stable hand, polo groom, and a trail guide in the Rocky Mountains. But here was a place I never expected to be working: the beaches of tropical northern Queensland, Australia.

I had landed a job in paradise. Though I’d worked at a trail stable before, this was a whole new experience: riding along the beach and splashing through water at high tide. We used Australian stock saddles, and all tack was synthetic—it was so humid that leather would quickly mold. On the trail, we didn’t have to keep an eye out for grizzly bears or angry elk—instead, we watched for cassowaries (emu-sized birds) and crocodiles in the nearby creek.

When I started, the trail stable had recently acquired two new horses, to eventually replace some of the older horses who were nearing retirement. My job was to ride the newbies until they were safe enough for guests. They were ex-racehorses with otherwise unknown pasts, between five to eight years old and extremely flighty. The pair had come together and were inseparable, earning them the names: Tom and Jerry.

Tom seemed to be the leader of two. We started with lots of groundwork, lessons in the round pen, and then I—a paid guinea pig—hopped on.

From the start Tom was calm, responsive, and easygoing. I took him on the morning ride, traversing through the oldest living rainforest on the planet. We walked through towering green trees with lizards and scrubfowl rustling through the leaves all around us, but he was cool as a cucumber…

…until we hit the beach. Tom saw the water, and instantly froze. He had clearly never seen an ocean before. I could practically hear him thinking: “What in the heavenly carrots is all that blue stuff???”

He impressed me: his reaction to seeing something very scary was to stand stock-still and stare until he figured it out. He thought before he acted.

This was a horse that would never survive in the wild.

But he was lovely to ride.

We even splashed through the waves on the way home—Tom going slowly, but without any big dramas. After just a week, Tom felt confident enough that he actually tried to lay down in the ocean. I was happy that he enjoyed the water so much, but maybe he’d become a little too comfortable. I yelled out, frantically kicked at his sides, and we were back upright with just my boots soaked.

Meanwhile, Jerry—who we’d been leaving in the paddock—made a habit of trying to follow us out the gate. He didn’t want to be left behind while his bestie went on rides, so I started ponying him off of Tom to give him exposure to the trails.

As it turned out, Jerry was a lot less relaxed about life than Tom. When something scared him—like a twig brushing against his side—he would leap forward three feet. The first time he saw the ocean, he literally ran to hide behind Tom.

But with a lot of patience and continued exposure, Jerry finally settled down. He got used to me swinging my saddle bags, fumbling to regain stirrups, crinkling a water bottle—every scenario I thought could happen with a guest.

The ocean was Jerry’s biggest obstacle: he would go in, but it took a lot of reassurance. He stepped in v-e-r-y slowly, until one day the horse behind us, Bella, had enough of waiting—she reached out, took a massive bite out of his butt, and he leapt forward into the water instantly!

We only walked through water about two feet deep to start with, allowing it splash around his legs gently. Smooth water wasn’t too bad, but when there were waves—whew, look out. The waves were small, but when they broke, we could go flying five feet sideways.

Finally, one day the water was glassy and tide was high: perfect conditions. Jerry walked out, nervously at first, until the water was nearly up to his withers. Maybe it was his body’s weightlessness in saltwater, or the fact that the other horses were all splashing and playing: suddenly, it clicked. Jerry realized the water wasn’t going to hurt him—actually, it was pretty refreshing! Finally, he relaxed in the ocean.

By the end of my time there, Tom and Jerry had progressed from not-yet-ridden unknowns to horses who loved attention and the water. Watching them take out their first customers on a ride was bittersweet—I would miss riding them—but also extremely rewarding.

You never know where horses will take you, or what they have to teach you next. But out of everything horses have given me, the greatest gift, always, is their friendship.