Home > Blog > Horse Rescue > A Smooth Step in the Journey 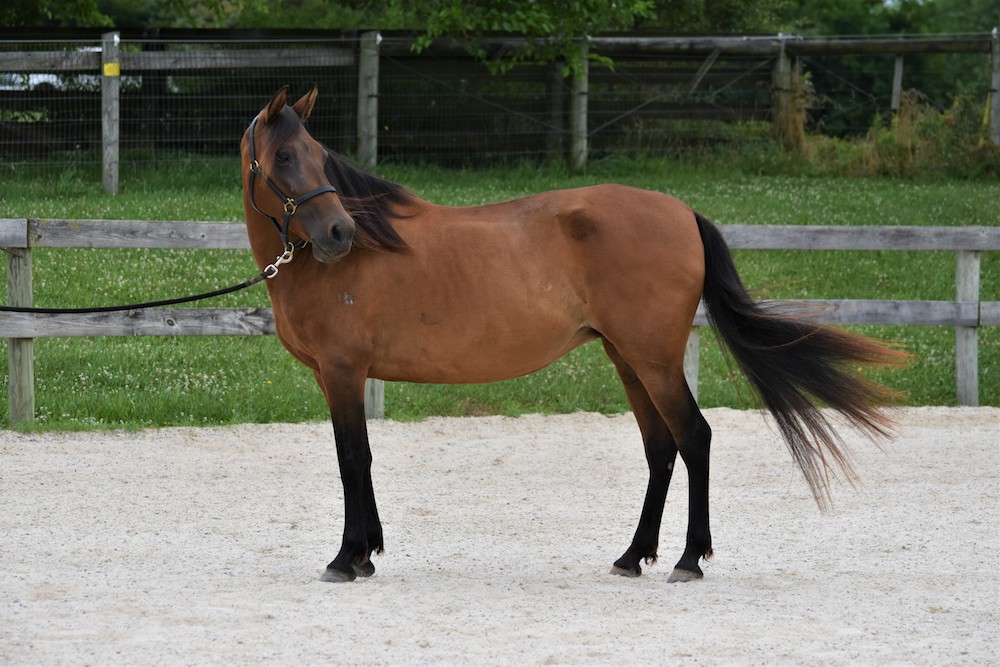 When you go out West, for example, you’ll see large herds surviving on their own, but this has left many with a misconception about horses’ ability to survive without humans.

Once horses are domesticated, they learn to rely on humans, and it becomes nearly impossible for them to survive without support. This misconception can lead to tragic consequences when owners initially care for horses then decide to turn them out in a field to fend for themselves.

In the hands of a well-respected breeder and trainer, you would expect to find nothing but healthy and happy horses. In Journey’s case, however, the 14-hand Paso Fino was one of 50 horses that had been retired on a large horse farm in Northern Virginia. Unattended for years, the animals were left to their own devices and ultimately found in a dire state.

When a former farmhand recognized the condition of the horses, animal control was called to evaluate the situation. Though the owner was cooperative from the start and allowed professionals to step in, the damage had already been done.

The 50 horses, all of which were mares, were suffering from emaciation, dental and hoof neglect, external parasites in form of lice, and mild skin dermatitis. Days End Farm Horse Rescue (DEFHR), Woodbine, MD, along with a number of other rescues from the surrounding Maryland and Virginia areas, stepped in to help the horses.

Journey arrived at DEFHR on February 27, 2020 and was one of 12 taken to DEFHR from the farm in Virginia. At 16 years old, she was the youngest of the group.

Though she was emaciated, suffered from dental neglect, and required immediate care, she would fare much better than some of the others.

Sadly, several were considerably older and in extremely critical condition, dealing with issues such as severe lameness, cancer, and neurologic deficiencies. After thorough evaluations from veterinarians and equine welfare experts, seven of the horses were subsequently humanely euthanized.

“These situations are extremely difficult,” said DeEtte Hillman, Equine Programs Director at Days End Farm Horse Rescue. “When you think about the needs of an aging horse and consider how long those needs have been neglected, we can start to understand if a horse will be able to rehabilitate. There is a point of no return—where the quality of life will not improve despite best efforts.

“For us to end an animal’s suffering, and to provide them a peaceful passing is a gift to them,” Hillman continued.

Hillman acknowledges that though difficult as this may be, it’s key to build awareness of the realities of equine neglect and abuse and the importance of speaking up if mismanagement or neglect is suspected.

Journey was sweet and willing from the start and was an active participant in her rehabilitation. The mare put on weight quickly—a trait associated with the Paso Fino breed—and, after three months of rehabilitation, she was cleared by the equine health manager to begin training.

At the onset of Journey’s training, it was clear that she was well-trained and had a previous show career. This put the training focus primarily on fitness as she had lost most of her muscle tone and ability to carry her balance. She took her work seriously, never wasting a minute, seeming to know she was on the path to a new shot at life.

DEFHR assistant trainer, Leigha Schrader, noted that the little mare is as quiet as can be on the ground and will stand to be groomed for hours but also has some pep in her step. Schrader incorporates a lot of trail rides into Journey’s training where they’ve been focused on getting her to relax on a loose rein.

“I want her to know that she does not need to take this second career as a trail horse quite so seriously!” Schrader laughed.

Having never worked with a Paso Fino before, Schrader credits Journey with teaching her about the breed.

“It has been fun to play around with feeling the difference in gaits, from the Classic Paso Fino to the Paso Quarto and Paso Largo,” Schrader said. “Researching the history of this unique breed has been fascinating and I’ve enjoyed learning how to find the natural gaits.”

Though Journey is just one of thousands of horses that have come through DEFHR’s gates, she is the first Paso Fino to be taken in by the organization, and is now proudly offered for adoption.

While Journey has taught her caretakers and trainers so much about her breed, her story also offers a more important lesson. Her strength, motivation, and elegance are proof that your past does not always define your future. Even against the odds, the next phase of the journey could be greater than ever imagined.