Finding Verity: The Truth Behind Equine Rescue and Welfare 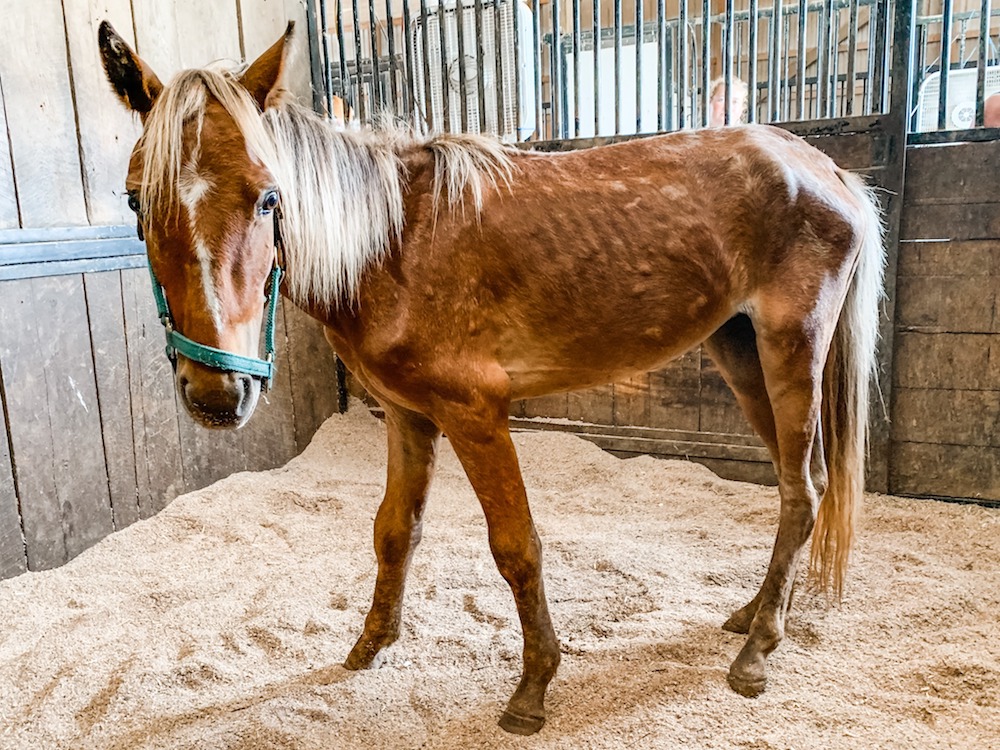 On a sweltering hot day in July of this year, employees of Days End Farm Horse Rescue (DEFHR) arrived at a property in Harford County, MD, expecting to assist animal control officers (ACOs) in the rescue of two horses and two ponies, all four of which were the subjects of a neglect case.

As the rescue effort neared completion, ACOs asked the staff to lend a hand with an ornery potbelly pig that refused to load into a crate. With the four horses loaded and content on the trailer, the staff obliged. While assisting with the pig, DEFHR’s Equine Programs Director, DeEtte Hillman, heard a faint whinny from an area overgrown with brush and brambles. Surprised to suspect a fifth horse on the property, Hillman followed the sound to find an emaciated, strawberry roan filly standing listlessly in a tiny pen, crafted from what appeared to be fencing for dogs.

The filly was without hay or food of any kind and the inch of water left in her bucket was riddled with mosquito eggs. Her swollen front legs showed signs of infection—in fact, she would only move sideways or backwards due to the restricted movement caused by the swelling, Hillman recalled. Her body was covered in what appeared to be hives, but turned out to be painful hornet stings from the swarm of wasps living alongside the filly’s makeshift shed.

“It was apparent that this baby was in the most critical condition compared to the four horses already on the trailer,” said Hillman. “She was running a fever, fearful of humans, and was visibly on a downward trajectory. Thankfully, due to exigent circumstances [the part of the law that allows an ACO to act without a direct order from a veterinarian or a judge], we were able to intervene on the spot and get her to the farm for immediate vet examination and treatment.”

On the drive back to the farm, Hillman and her team began brainstorming names for the new rescues. The process of naming horses at DEFHR mimics the alphabetical process by which hurricanes are named. By the time they picked up the filly in July, DEFHR had already reached the letter ‘V’ in the alphabet. Several ideas were suggested, but it wasn’t until DEFHR’s Equine Health Manager, Lynn Garvin, suggested ‘Verity’ that Hillman knew it was a perfect fit.

By definition, Verity means, “a true principle or belief” or put differently, “the quality or state of being true.”

“Sometimes we name our horses after a physical characteristic and sometimes a name represents a type of validation for what we do,” noted Hillman. “In Verity’s case, it was the latter and it was a perfect fit.”

More than a name

Verity’s discovery was anything but typical. The day that Verity was found was actually the third time that animal control had visited the property. The initial visit took place in March in response to a call of concern from a neighbor. Animal control’s first investigation noted that the horses were healthy and in good weight but after a follow up call from the neighbor in June, and a second investigation and veterinary evaluation, it was determined that the health of the horses were beginning to decline.

As a result, the horses’ owners were given compliance orders—specific instruction that the horses must receive proper care and nutrition and the horses must show signs of progress, otherwise, they would be subject to seizure and impoundment. Weeks later, ACOs returned hoping to see improvement. To their dismay, the owners had not been compliant, and the horses’ conditions were rapidly declining. It was at this point that warrants were sought and DEFHR was contacted to assist with the rescue and transportation of the horses.

“I truly believe fate intervened and we were meant to be on that property on that specific day,” stated Hillman. “The fact that the four horses loaded beautifully and stood patiently on the trailer enabled us to assist the ACOs with the pig which led us to Verity. All of the stars aligned to allow us to find her.”

In Hillman’s mind, when they found the filly, the verity of DEFHR’s mission was realized.

Hillman says if it weren’t for the two phone calls made by a community member, Verity and her four companions may not have fared as well as they did. Unfortunately, many other horses aren’t as fortunate. Hillman stresses the importance of speaking up if something appears to be off.

“Time is of the essence when it comes to equine intervention. Especially for young horses like Verity that are more vulnerable, lack of proper care and nutrition can have catastrophic and life-altering consequences,” stated Hillman. “If you see something that doesn’t seem right, make the call!”

Hillman also notes that there are misconceptions about animal control and animal welfare interventions. The primary goal isn’t necessarily to intervene and take custody of an animal. In fact, animal control wants horses to stay in their homes. They want owners to be open to education—through the support of experts, like knowledgeable ACOs and veterinarians—so they can step up to the plate and give the horses in their care what they need.

“A large part of what we do at Days End Farm is training and educating animal control officers and first responders so that they understand how to best support owners and their animals,” said Hillman. “Often, intervention isn’t necessary if these conversations with owners can be had.”

A future for Verity

During her initial days in critical care at DEFHR, Verity was so hungry for any sort of roughage that she resorted to eating her sawdust bedding. This is common in starvation cases and requires a grazing muzzle to keep the tendency at bay. After a month of rehabilitation, Verity proudly sports a plump hay belly, and has learned to trust humans, greeting her visitors with a nicker and hoping for scratches.

Presently, Verity remains in the custody of DEFHR. She is part of a civil and criminal case that will go to trial with the goal of DEFHR obtaining ownership of Verity and the four other horses found on the property that day. Once DEFHR has ownership and following a full rehabilitation, Verity will be able to enter training evaluation and begin the journey that Hillman hopes will enable her to enjoy a purposeful life in a new, loving home.