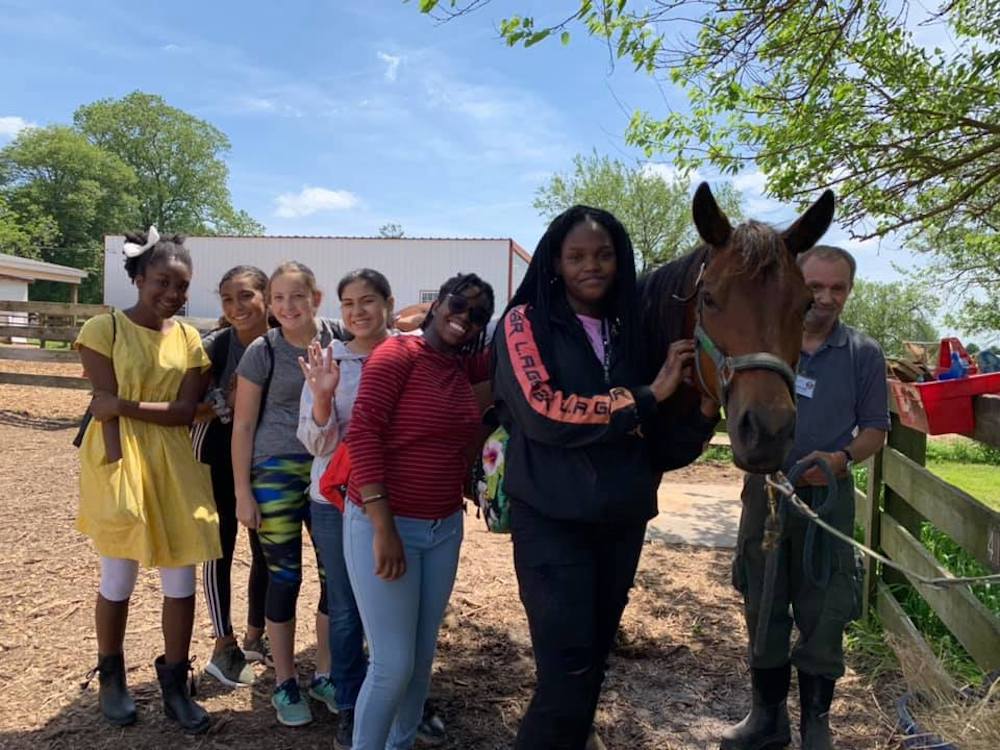 When Days End Farm Horse Rescue in Woodbine, MD, began more than 30 years ago, it was with the mission to not only save horses, but to teach others how to help horses, too.

Youth and emergency responders play an integral part in furthering DEFHR’s mission, and as a result, DEFHR has developed a number of educational programs for children, adults, and rescue personnel. But unlike a typical classroom education where humans lead the lessons, the common thread in many of DEFHR’s programs is equines as educators. These special horses are better known as equine ambassadors.

Enter Ziporah, a now 17-year-old bay Quarter Horse mare that arrived at DEFHR in April of 2018 as a starvation case. Formerly a money-making reining horse, the talented mare had succumbed to neglect like so many other rescued equines, yet she emerged from her DEFHR training program as a beloved equine ambassador that now plays an important role in several of the rescue’s educational programs.

Ziporah thrives in her job, but not every horse has the chops to become an equine ambassador, which requires a thorough evaluation phase and training period. After her initial rehabilitation period, Ziporah entered DEFHR’s evaluation program to determine her suitability for this important job.

“The evaluation phase of our training program asks a lot of questions of the horses to see what they are familiar with and where there may be a need to help the horse understand a concept better,” explains Sara Strauss, Head Trainer, Days End Farm Horse Rescue.

Some of the questions asked of the horses include freely traveling in a round pen, then graduating to working on a lunge line, asking the horse to move its hindquarters, forequarters, as well as backing. Training equipment—such as a stick/string, tarps, flags, a saddle, and a bridle—are also gradually introduced.

“It was very obvious that she had received good training at some point in her life and that she was a very well-rounded mare,” Strauss recalls. “Ziporah went through the evaluation phase quickly and it was very apparent that she would make a solid addition to our group of equine ambassadors with her laidback nature, smooth jog, wealth of knowledge, and her sweet, kind face.”

Above all, however, DEFHR equine ambassadors must love people! Ziporah easily fit that bill, too.

A horse with many hats

To date, prior to COVID-19, Ziporah has starred in numerous in-person youth programs including DEFHR’s Legacy Camp and Scout Days. During these programs, Ziporah can often be found surrounded by kids—sometimes she’ll see up to 100 kids per day. Her gentle nature and patience are critical as she teaches kids how to groom, bathe and lead, and she will happily oblige pony rides and mounted games. But don’t let her kind eyes fool you; Ziporah’s previous days as a champion reining mount aren’t lost on her.

“During our on-horseback game day, she’s been known to cheat a time or two,” says Strauss. “She snags the win by sneaking in her slow western jog during a walking-only game. The kids just love it!”

In addition to DEFHR’s youth programs, Ziporah has also helped in its animal control trainings. Even during her own rescue and rehabilitation, she proved to be a star student herself, standing quietly as animal control officers (ACOs) evaluated her to determine her body condition score—a 2, the second poorest score.

Now that she is fully rehabbed, Ziporah has moved from student to teacher, working with ACOs to teach them about equine behavior, catching, leading and approaching horses, and trailer loading.

In her spare time, when she isn’t playing the role of leading equine educator, Ziporah is busy being pampered by her several grooming sponsors and a riding sponsor and snacking on her favorite treats—Stud Muffins. Though her in-person educational programs have been put on pause due to COVID-19, Ziporah is currently enjoying extra time grazing with her herd mates and daily grooming sessions.

While Ziporah enjoys a well-deserved vacation from the ambassador program, DEFHR continues to further its mission through remote educational programs such as DEFHR Homeschool Education Program—designed for children who can’t attend school and still want to learn about horses and the environment, and DEFHR Camp-In-A-Box—a year-round, virtual spin on the DEFHR’s summer camp that includes hands-on projects, DIY experiments, online videos, and activities revolving around the DEFHR horses.

For questions about DEFHR or its educational programs, please email welcome@defhr.org.