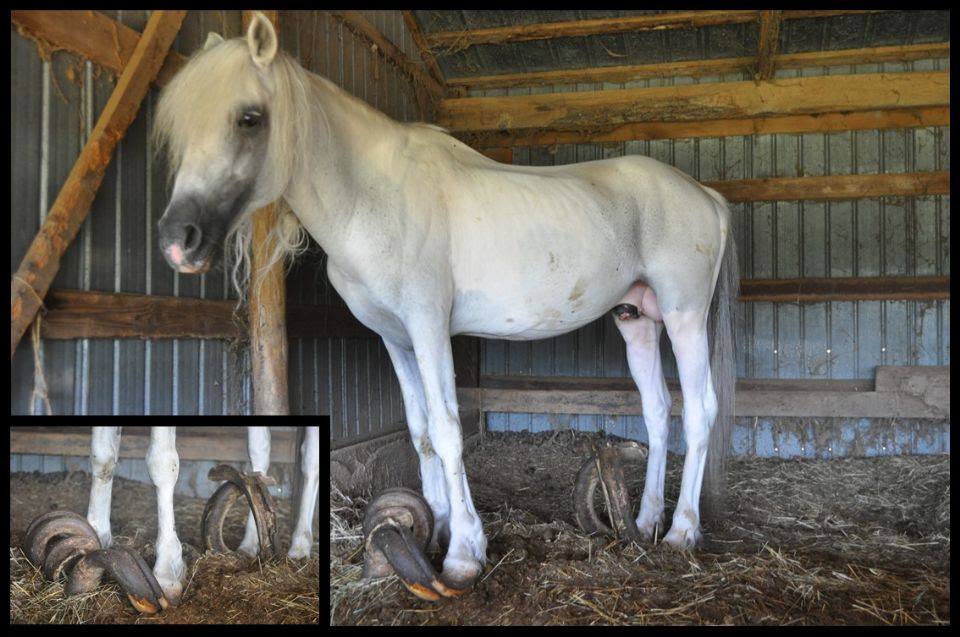 The pony’s curled feet bore little resemblance to hooves. Each hoof had grown to over three feet long, twisting painfully beneath his wobbling legs as he struggled to stand in a filthy stall piled with more than four feet of muck. Even after decades of assisting local law enforcement with similar situations, this was easily the worst case of hoof neglect DEFHR had ever seen.

Luckily for Quest, help arrived in the nick of time.

Local police had been called to the western Maryland residence for a domestic incident and noted pet pigeons in the house. They contacted the Humane Society of Washington County (HSWC) to check on the care of the birds, and when an animal control officer arrived, she discovered Quest and two other ponies locked in a barn. DEFHR staff and their veterinarian, Dr. Peter O’Halloran of Monocacy Equine Associates, were called to the scene to consult on Quest’s prognosis for recovery.

At the recommendation of Dr. O’Halloran, HSWC was able to secure relinquishment of the ponies from the owners. HSWC officers, DEFHR staff, Dr. O’Halloran, and farrier Kenny Romjue returned the following day. They were able to sedate the ponies, trim their hooves using a variety of tools, and transfer them to DEFHR, based nearby in Woodbine, Maryland.

Incredibly, each of Quest’s hoof trimmings weighed 30 pounds. Sadly, one of the ponies suffered a catastrophic injury due to the effects of the neglect and was euthanized on the scene.

Though the owners provided the ponies with hay and water, they admitted that they’d locked the animals in the barn 12 to 15 years previously, never letting them out nor providing them with any other health or farrier care. They were eventually charged with felony torture and various misdemeanor ‘failure to provide’ charges, which ended with a guilty plea to three misdemeanor charges.

Even though the little stallion had been rescued, he still had a long path to recovery.

“Quest’s excessive hoof growth was removed on-site, and once he arrived at DEFHR he underwent on-going radiographing of the internal structure of his feet and consultations between our veterinarian and farrier on how best to proceed with his corrective trims,” says DeEtte Hillman, DEFHR’s Equine Programs Director.

“As badly as we wanted to provide Quest with the ability to move around and enjoy his new life, he suffered from muscle atrophy and his tendons and ligaments were adjusting to their new angles, which required us to gradually expand his environment a few feet at a time to help his body adjust,” says Hillman.

Incredibly, he was able to fully heal from his ordeal, with no lasting physical effects.

Quest was castrated to give him the best chance for a new home, and after he’d recovered and gained enough strength, DEFHR’s Assistant Trainer Leigha Schrader took the little horse under her wing. With her short stature, Leigha was the perfect size for 12.3-hand Quest (who they determined to likely be of Arabian/Paint descent, because of his hidden pinto patches).

“When he first came to DEFHR, he was very nervous and unsure,” says Schrader. “Everything was new to him. From his first bath to his first time seeing snow, everything was an adventure!”

With Schrader’s help, Quest began to come out of his shell and his true nature blossomed. He became confident, curious, and was a willing student during their lessons. Schrader trained him to ride, but what he loved most of all was learning tricks and performing at-liberty work.

“He was very intelligent and enjoyed solving puzzles, so trick training was a fun game to him,” remembers Schrader. “He learned how to bow, lay down, perform liberty circles, do a Spanish walk, and stand on the pedestal—that was his favorite.”

Soon, they were performing at the Montgomery County Fair, Maryland State Fair, and DEFHR’s Fall Festival. They also went cross-country schooling at a nearby facility and competed in local dressage shows.

Though she’s worked with countless rescues horses at DEFHR over the years, Quest will always be a-once-in-a-lifetime pony for Schrader.

“The extreme neglect he faced was one hurdle, but then to go from a 19-year-old unbroke stallion to a confident riding pony? Quest beat every odd against him.”

The one problem that continued to plague Quest were his social skills with other horses.

“As he was introduced into a herd of fellow geldings, Quest exhibited challenges in the area of herd dynamics that were a result of his years of isolation,” recalls Hillman. “We learned then that he needed a home that provided him with only a few fellow horses of small and friendly stature.”

Luckily, for Quest, he didn’t have to wait long to find his new home.

The life of a king

Jennie Lupkin got her first glimpse of Quest at a local dressage show, where he was competing with Schrader. After chatting briefly with Schrader about Quest, the 21-year-old couldn’t get the diminutive grey pony out of her mind. She knew there was something special about him.

A week later, a friend who was familiar with Quest’s story said Lupkin should consider applying to adopt him from DEFHR.

“She showed me a picture of him when the team rescued him and I immediately started crying,” remembered Lupkin. At the time, Lupkin’s only connection with DEFHR was through boarders at their farm who’d adopted horses from the rescue.

“I went straight home and started the adoption process by first applying to meet him ‘officially.’ I knew it was meant to be at that point and I was going to do everything in my power to bring him home.”

When Lupkin visited him at DEFHR, she discovered how much Quest had to overcome.

“He had to completely learn about humans and being a horse in general,” she says. “Thankfully the team at DEFHR is absolutely top notch and gave him an incredible experience from beginning to end. You would never know he was ever afraid of people.”

When she was approved to adopt Quest, DEFHR asked if they could keep him for a few extra months to finish out his and Shrader’s upcoming schedule of events. Not only did the pair provide entertainment for the crowds, but they were also important ambassadors for the nonprofit’s mission of educating the public about equine welfare.

“I had the opportunity to watch a couple of those performances and never left with dry eyes,” recalls Lupkin. “They were incredible together!”

In September 2017, Quest’s adoption was official, and he began his new life on Lupkin’s family farm in nearby Frederick, Maryland. She began to forge her own special relationship with Quest, caring for him herself every day.

Lupkin’s original plan was to teach him to be a driving pony, but she discovered they had much more fun riding. Together, they began to compete in local low-level dressage shows and horse trials.

“I take him for the experience, never with any expectation to bring any ribbons home. He loves traveling and meeting new people and I love watching him get to experience everything a pony should after everything he’s been through.”

When he’s not out competing at shows, Quest rules the roost at Lupkin’s farm.

“He lives the life of a king,” she laughs. “He loves to stand on his mounting block while I pick stalls, he free jumps for exercise, and he enjoys being ridden out on the trails. He’s bold, opinionated, kind-hearted, and smart as a whip. Sometimes I think he’s a human trapped in pony’s body.”

And that other pony that was rescued alongside Quest? “He was adopted by a lovely woman who I keep in contact with via social media. She loves him dearly!” adds Lupkin.

Lupkin is grateful for DEFHR’s rehabilitation and training they did with Quest, and thankful he was part of the 2,600 horses the organization has rehomed throughout its 31-year history.

“I have cared for several DEFHR horses [two others we adopted a year after Quest, and many have boarded on our farm over the years] and I’m always thrilled with the confident and knowledgeable horses they send out into the world. You set yourself up for success by bringing home a DEFHR horse.”

For Lupkin, being able to have a such a partnership with a pony who’s overcome so much has changed her life.

“He inspires me every single day to try new things, to take every opportunity to make someone’s day a little better, and to leave anything in my past in my past,” she says. “The little guy is a ray of sunshine and I’m very fortunate to get to experience life with him by my side.”