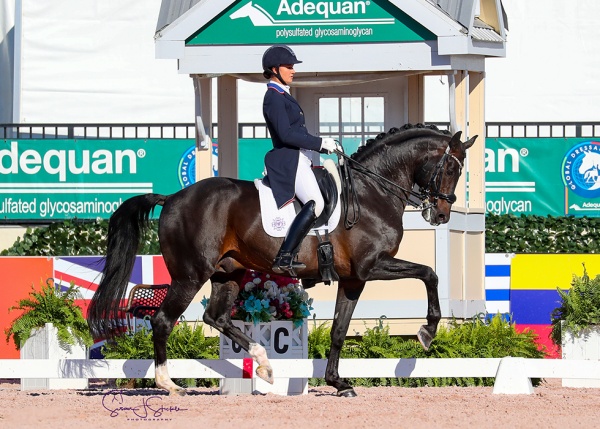 Missing the magical partnership that was Laura Graves and Verdades?

Fear not! Team USA has a new dressage dream team and they just cracked the elusive 80% barrier in the Grand Prix Special.

Adrienne Lyle and Salvino, USA’s top ranked combination, logged a new personal best at the Adequan® Global Dressage Festival (AGDF) in Wellington, FL on Saturday, Feb. 29, 2020, earning an 80.17% from the judges. It was their first performance since Aachen in July 2019 and second victory of the week after taking Thursday’s Grand Prix (76.870%).

“I’m amazed,” said Lyle. “I couldn’t have asked for anything more from him. The test was everything you’d hoped in the back of your mind that you’d be able to achieve. I didn’t say it out loud, but I was secretly hoping we’d get at least close to 80%.”

Lyle and Salvino made their big tour debut at AGDF three years ago.

“We’ve had him for five years now, and been showing the grand prix for three years, but developed him slowly,” said the 35-year-old, who rides for owner Betsy Juliano and trains with American team chef d’equipe, Debbie MacDonald.

“We always thought he had talent, but we took our time and now he really feels like he’s ready to put it all together. He’s at a place in his mind and body now where he’s able to be consistent and not be stressed about doing any of it.”

Owner Juliano seconded that opinion: “That horse trusts Adrienne for every single second. She trains him with complete empathy and understanding and thoroughness, so what we see here in the arena is the result of all that. Every single day. She knows every molecule of that horse.”

“He didn’t change at all [from the warm-up]; he didn’t get hot or dull or strong and that’s huge for us,” continued Lyle. “To get those last few little points, it’s all about the refinement and the rideability. He’s the coolest thing I’ve ever sat on. To get an 80% in a grand prix is something not many people get to do and it’s an incredible honor to sit on him.”

Lyle and Salvino currently have their sights set on qualifying for Tokyo 2020, but one decision is already certain for the 13-year-old stallion. Salvino will never be in want of another home.

“I’ve never sold a horse; any one I’ve ever acquired will be kept for life and that will be the same for him,” said Juliano. “It’s important to me that the rider has that security, but also I’m not in it to make money. We do talk about probably breeding him once his competition career is over, but not until then, because we want to keep him focused on this.”

Lyle is currently ranked #17 in the world.