From Starvation to Show Ring 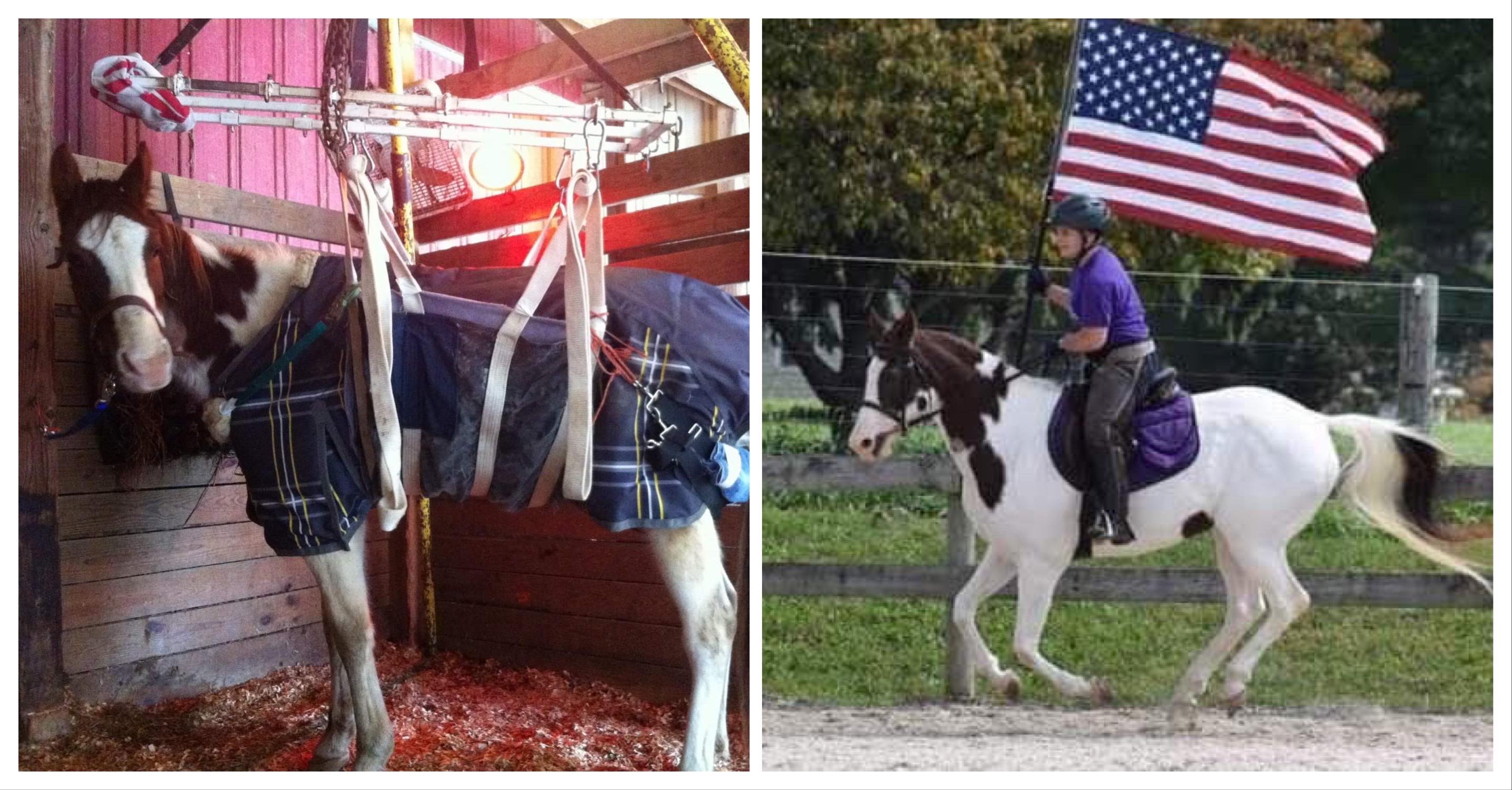 So, when she began searching for another horse later that year, it had to be the right one. It had to be one who could fill the void the mare left.

“They had a picture of her schooling on cross country. She was cantering through a water feature and just had this look that was adventurous,” Kim said.

She booked an appointment immediately and drove a few hours north from her home in Manassas, Virginia to meet Mika in person.

Rescued in the nick of time

Staff and volunteers spent weeks rehabbing Mika and helping her regain strength with the assistance of their Anderson Sling, a support system designed to aid horses through rehabilitation.

“Horses who are weak, lethargic, sick, or unable to stand and support themselves don’t have a whole lot of fight or flight instinct left in them, so they take to sling therapy quite well,” explains DeEtte Hillman, DEFHR’s Equine Programs Director. “What’s important is the constant supply of feed and water and, of course, continuous monitoring.”

“Mika arrived when it was bitterly cold out,” recalls Leigha Schrader, DEFHR’s Assistant Trainer. “So, one of our volunteers parked her camper near the barn to give staff and volunteers a place to rest between shifts. We monitored her 24 hours a day.”

The horses are removed from the sling every day to be hand walked.

“Once their energy returns, things get a little more interesting, and we start to gauge when is the best time to remove the sling all together,” adds DeEtte. “A good indicator is when they are able to stand on their own after laying down.”

A carefully structured feeding program is also a vital part of DEFHR’s strategy to help neglected horses regain their health.

“Forage is critical, so hay and water are introduced in slow and small increments,” says DeEtte. “The rate of consumption and volume of hay is also controlled. Once a horse is stable, grain is introduced to address additional fat and protein needs to help rebuild muscle and fat reserves. We use Triple Crown Senior in small amounts three to five times a day depending on the horse’s needs. Grain is slowly increased and maxed out at three pounds.

“Once the horse’s body condition dictates, the grain is then reduced to maintenance levels. In cases like Mika, who was a body score of one on the Henneke Body Condition Scale, refeeding can take three to four months.”

Like Mika, horses that come to DEFHR are often the most extreme cases of neglect and can take months to begin real work. After completing rehabilitation, horses are started into training with a focus on rebuilding lost muscle.

“Groundwork is always a large part of the horse’s training,” explains Leigha. “Our head trainer, Sara Strauss, and I utilize in-hand and lunge work to teach the horse how to better carry itself before ever getting on. Depending on what the horse needs, they may have trot pole or hill work incorporated into their training. Each program is individual and tailored specific to the horse’s needs. It is amazing to witness the transformation that these horses are able to achieve.”

Under Leigha’s careful planning and management with both in-hand and under-saddle work, Mika’s strength and confidence soared. Eventually, she galloped around local cross-country courses with ears pricked and led trail rides at the farm without batting an eye. She had come to DEFHR so terribly close to a tragic end, but in their care, blossomed into a new horse, ready for a job and a new home.

A lesson in versatility

Timing smiled upon Kim. What once seemed like one of the darkest points in her life became a bright moment for two hearts. After she tried Mika at DEFHR, she couldn’t forget her. She completed the adoption process and brought the mare home.

Like any new relationship they had to acclimate to one another.

“We needed some time to get used to each other,” Kim said. “Mika is a very sensitive soul, so I had to take a step back and adjust my approach. I tried a gentler way and things suddenly clicked. We became pretty good partners.”

Mika thrived under Kim’s guidance. She discovered an incredible versatility in her little mare, and that fed her own confidence. Kim and Mika competed at local working equitation shows—a multi-phase discipline created in Europe that showcases the skills and riding techniques used to work cattle and perform other ranch chores. The pair demonstrated their growing partnership in the dressage phase and tackled various tasks a horse and rider might find themselves doing on a ranch, such as opening and closing a gate or crossing a bridge, in the obstacles phase.

“In the working equitation classes, you might be asked to pick up a pole and spear a ring to show your accuracy and control,” Kim describes. “Or you might have to execute another obstacle while carrying the pole. For example, cross a bridge or do a figure-eight pattern around the jumps, all while riding in an uphill frame.”

Mika’s versatility showed Kim a whole new level of enjoyment in her riding. “We do a lot of different things together and she’s really good at obstacles. That phase comes very naturally to her,” Kim says.

Mika even helped her grow in areas she felt less experienced. “I didn’t have a strong base knowledge for the more classical dressage principles,” she continues. “So, Mika’s really helping me learn to become a better rider.”

The duo competes in judged trail rides, too. They’ve earned their local association’s Reserve Championship the past two years. So, it comes as little surprise that they find camping overnight together a grand adventure as well. Mika’s even galloped Kim around the Pimlico Racetrack for the “Canter for a Cause” breast-cancer benefit.

“She is such a good sport,” Kim says. “She is up for anything I throw at her. She just pricks her ears, smiles and says, ‘Okay, let’s go!’”

Kim and Mika became poster children for DEFHR. They visit often when the facility hosts its Alumni Spotlights or the annual Fall Festival’s Rescue Makeover Challenge.

“Going back to Days End is always amazing,” Kim says. “The Alumni Makeover is fun because I run into folks that knew her when she first arrived and was so ill. Seeing their eyes light up and the joy on their faces, knowing that one of the adopted horses is doing so well, is such a great feeling.”

When she lost her mare, Kim didn’t know if any horse could ever fill the hole she left. While that mare will forever trot through Kim’s memory, Mika helped her heart and confidence grow beyond expectation.

“Everything they told me, all the details, all of the history with her training—everything was just spot on,” Kim says of the staff at DEFHR.

In 2019, the volunteer-based facility celebrated their 30-year anniversary as a rescue and rehabilitation center. It shelters up to 150 horses annually. Over the past three decades, thanks to the support of local volunteers, dedicated staff, and skilled trainers, DEFHR has found new homes for over 2,300 horses.

“I think the rescued horses know they’ve been rescued,” Kim says. “I feel like most of them have a special place in their hearts where they bond because they know what it’s like to feel unsafe. I think they’re appreciative, and I think they realize how lucky they are.”

“The granddaughter of the original owner and breeder, pre-neglect, contacted me and sent me Mika’s foal photos,” Kim says. “That was really a blessing. I definitely cried over that. They are so grateful that she is now doing so well.”

DEFHR is a 501(c)(3), volunteer-based, animal welfare organization established in 1989 to ensure quality care and treatment of horses through intervention, education, and outreach. To learn more about DEFHR or to find out how to get involved with the 501(c)(3) non-profit, visit www.defhr.org or find the rescue on Facebook.